This week we have a newlywed woman who’s desperate to get some time to herself. Is there a way for her to ask her husband to leave her alone? Will her husband finally let her get her game on in peace?

Some people have problems that require delicate advice from a qualified professional. Others just need a random guy on the internet to kick ’em in the teeth (with honesty, that is). I’m the latter. Welcome back to Tough Love. 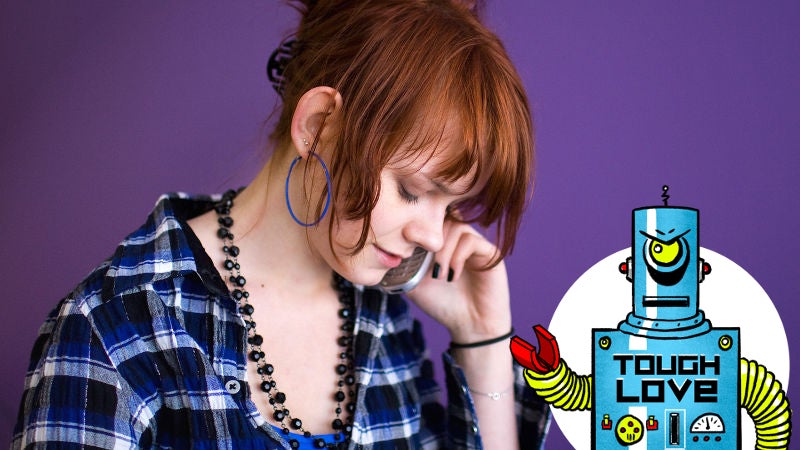 When She's Just Not That Into You, Bro

This week we have a college boy who's desperately clinging onto a long-distance relationship with a girl he's known since high school. Is she being unreasonable and ignoring him? Or is this dude expecting way too much?

Note: I’m not a therapist or health professional of any kind. People ask for my advice and I give it to them. End of transaction. If you have a problem with it, feel free to file a formal complaint here. Now that that’s out of the way, let’s get on with it:

I’ve been with my recently-wed husband for about six years now, and we’ve been living in a small bedroom for about five years of our relationship – so there was little room to have our own time. All five of those years he had been unemployed, so every time I came home from work, he was there. This left me with no alone time.

He has a job now, but he’s temporarily working only one day a week, so I’m back to him being home all the time. I understand that he’s alone the whole time I’m at work, so I try to spend time with him. But every time I ask him what he wants to do it’s either “idk” or “sex” (sometimes joking, sometimes not).

I like playing video games a lot, it’s a way for me to unwind after I get home from work. I even made sure I found someone who also likes to play video games so he would understand when I want to binge play.

I’ve tried to play video games with him, but he’s gotten bored of the games I like to play. I’ve tried to play the games he likes, but since he’s home more than I am he surpasses the level or part of the story I’m in, finishes the game, then doesn’t want to play it any more.

Every time I bring up the fact that normal couples don’t spend all of their available time together, and I should have more me time to myself, he goes on the defence and basically says he’s a horrible husband and yada yada, so we get nowhere. What do I do?

You’re right, while it varies from person to person, most couples don’t spend every waking moment together, nor do they want to. Having alone time is important. It gives us time to unwind, reflect, and it allows us to miss the person we love a little bit. Even an evening away from one another can be enough to remind you how much you like being with that person, both mentally and physically.

Sharing a single room is tough since it basically makes it impossible to do your own thing. Moving somewhere with more than one room would probably help a bit, but the real issue here is your husband’s dependency on you. You could almost replace “my husband” in your letter with “my dog” and it would make sense – almost.

I mean, what’s sexier than a guy who sits around all day doing nothing, playing the games you’re supposed to be playing together, clinging onto you the moment you get home like some sort of emotionally-stunted parasite, then making you feel guilty when you want to do something on your own? Sorry ladies, this one’s taken.

I don’t know why he wasn’t working for so long and is barely working now, but unless there’s something keeping him from doing so (injury, illness or so on), he should probably work more. Not because he needs to be the breadwinner – those old family models are garbage – but because the guy needs something to do that isn’t video games and waiting around for you.

He needs to get out of the house and interact with other people, or at least, you know, walk around a little and breathe air that isn’t mostly flatulence and Doritos dust.

It’s great that you two could potentially play games together, in theory, but I don’t think he actually does want to play with you, BA. He stops playing the games you like out of “boredom”, and doesn’t wait to play his games with you. If he wanted to play those games with you, he’d play something else during the day while he moulds and slowly becomes part of the room you live in.

And you know what, that’s fine! You don’t need to play games together. In fact, you’re probably better off not playing together in this situation. You need time to yourself to do whatever it is you want to do. Sometimes that will be binging your latest game obsession, and other times that will simply involve being away from him for a little bit.

For starters, urge him to spend time with his friends, in person. If he doesn’t have any, he should get some. Don’t let him become one of those men that has no friends in his life by the time he’s middle-aged. It’s unhealthy, both for your relationship and for him. The same goes for you. Go hang out with some friends or get some. For the love of all that is holy, go spend time with other people – both of you!

The other part of the problem is your schedule, or lack thereof. You need to define things for each other and make boundaries. I know it’s easy to let every night be loosey-goosey and go with the flow, but that makes it harder to do what you want to do.

When a night is open and you come home and say, “I just want to play my game for a bit,” it looks like a choice – like you’ve chosen something over him. If you plot things out, playing your games isn’t a spur of the moment choice, it’s part of the plan.

So, you should establish a schedule of some kind. Tell him straight up that you’re going to be playing your games on specific nights each week, and that he should plan on occupying himself on those nights. That lets him know ahead of time that his sad puppy act isn’t going to work, so he should make his own plans.

And be sure to make plans together, too. If he knows he’s guaranteed a few nights with you each week, he might lay off and let you do your own thing. But these date plans shouldn’t be all on you. If he wants to hang out and do stuff with you, he should cut the “idk” crap and come up with some of it.