Why Won’t My Desktop Show Up On My Connected TV?

Physically connecting a television to your computer is easy enough, even if you have to buy a new cable (or dongle) to go from your system to your television’s HDMI input. Getting the two to play nicely be a bit of a headache, however.

Everyone who owns a desktop PC with a small monitor, or works on their laptops in their living rooms, has probably dreamed the same dream at one point: connecting their computer to their big-arse televisions. And why not? A television is a giant display, isn’t it? Why suffer a tiny monitor or laptop screen while your 55-inch (or larger) television sits unused?

My motherboard is working. It power-ups correctly. The only problem I have is that I don’t get any display on my monitor — a big TCL TV. I’ve tried changing the power supply, but it makes no sense. I’ve also tried disassembling my PC reassembling it all over again, but it doesn’t fix my problem. Any suggestions?

Well, Bryan, you’ve already gone above and beyond what I would have suggested trying. If your television isn’t giving you a picture when you connect it to your computer, I’m not sure your power supply is to blame. And while it’s great that you took apart your PC and rebuilt it — sometimes that can fix the strangest of issues — that’s also the nuclear approach, given how long it takes to do (and how you might end up making your issues worse if you mess something up).

In this case, there are a few other tricks you can try to get your television working again. First off, let’s all just agree that HDMI can occasionally be a pain in the arse. I spent years fighting with my receiver’s HDMI connections – my computer sends a signal to both my desktop monitor and an attached television – until I stumbled across a handy fix that finally got my audio working consistently. So I sympathize with you on the issues you’re having. I do.

First, let’s try a basic fix. Try a different version of whatever cable it is you’re using to connect your computer to your TV – you never know. You can also try using a different port on your computer, if possible, to see if that gives you a signal. Try the same trick with your TV: Do any other HDMI ports work?

While you’re at it, try disconnecting your TV from your computer, powering on your TV, and switching from its HDMI connection to anything else. Then, turn your PC back on, wait for it to boot into your operating system, plug the HDMI cable back in, and flip the TV back to its HDMI connection. Any luck?

If that doesn’t work, try turning off your computer and television. Wait. Turn your television on first, make sure it’s set to the HDMI connection you’re using, and then turn on your computer. It’s possible that the order is the problem here, and your television is just being very particular about what it does when it detects (or doesn’t detect) HDMI signals.

Also, if you have a Smart TV, have you updated the firmware for your set? That might help, too.

It’s possible that there’s some setting – perhaps your system’s resolution or refresh rate – that isn’t compatible with your television. Try cranking both down to something like 800×600 and the lowest refresh rate you can run at. Does that give you a picture? If so, start adjusting the settings up to see how high you can go before you lose the image. (Or, you could just check your TV’s manual to see what resolution and refresh rates it supports, I suppose.) 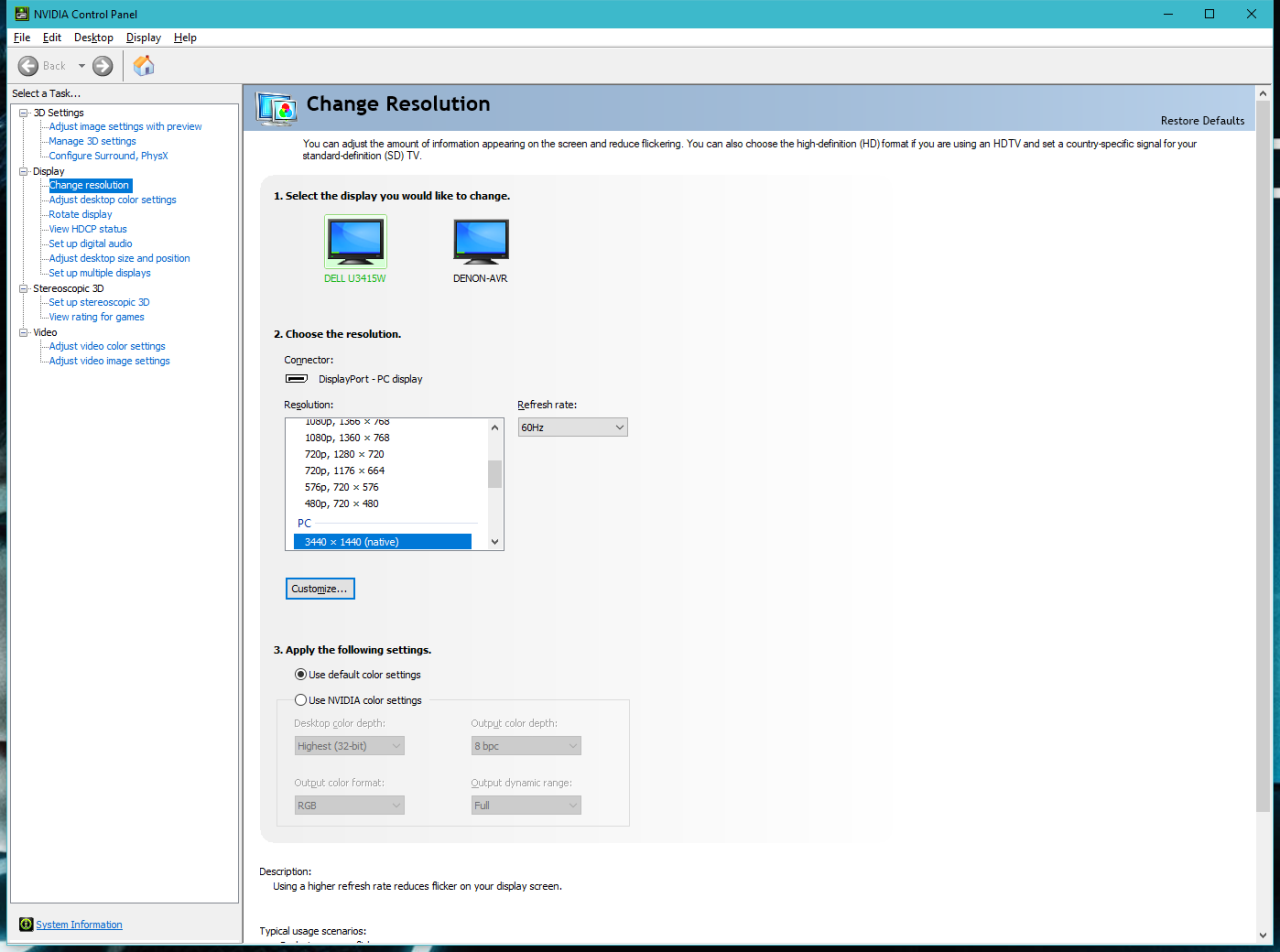 Try adjusting your system’s resolution (or refresh rate) to see if that gets your connected TV working. (Screenshot: David Murphy)

Try adjusting your system’s resolution (or refresh rate) to see if that gets your connected TV working.Screenshot: David Murphy

As far as computer issues go, display problems — with televisions, especially — rank pretty high on the “Why is this happening to me?” list. If all else fails, you can try lugging your system to a friend’s house to see if it works with their set. At the very least, that might help you figure out whether you have a system issue or a TV issue, and you can fiddle around with settings from there to try and get it to work.