This Ring Is Nearly The Perfect Minimalist Fitness Tracker

I’m not into watches or wristbands, but for the last few weeks I’ve been wearing a fitness tracker on my finger. It knows how long I sleep and detects when I walk or run, and all I’ve gotta do is wear it like jewellery and forget about it.

The device is the Motiv Ring. Its features and its iOS app are minimalist compared to what a Fitbit or an Apple Watch can do, which is part of why I like it. I’m not sure exactly how they fit an activity tracker into a ring, but I’m here for it.

Surprisingly, the ring is not huge. It’s about the size of a man’s wedding ring (8mm wide) with a slightly thicker part at the bottom of your finger. When you order the ring, the company actually ships you a box with seven plastic dummy rings so you can figure out what size you need. Wisely, the instructions encourage you to wear your chosen size for 24 hours before making a final decision because our fingers tend to swell and shrink during the day. The rings come in full sizes 6 through 12.

Motiv sent me a ring to try out for the purposes of this review. I asked for rose gold instead of slate, then feared it would actually not look cool to wear a shiny pink ring, but when it came it was more of a pleasingly warm coppery colour.

The ring’s biggest upside and biggest downside are the same: it’s a ring.

My ring only needed to be charged every two to three days for 60-90 minutes. (Motiv says it lasts three to five days on a charge, but it never lasted more than three days for me.) It comes with two USB chargers, including one that snaps into a key fob, so it was easy to charge at my computer or in the car.

Because you don’t have to charge it every night, you can wear the ring while you sleep. It’s also water resistant, so you can keep it on while you wash your hands or take a shower. Motiv says you can swim with it, too. The ring’s biggest upside and biggest downside are the same: it’s a ring. That’s an upside if you don’t like to wear things on your wrist (drives me nuts while I’m typing) but rings can also be hard to get used to. And if you do a lot of workouts that involve barbells or pull-up bars, you may end up wanting to remove your ring mid-workout. 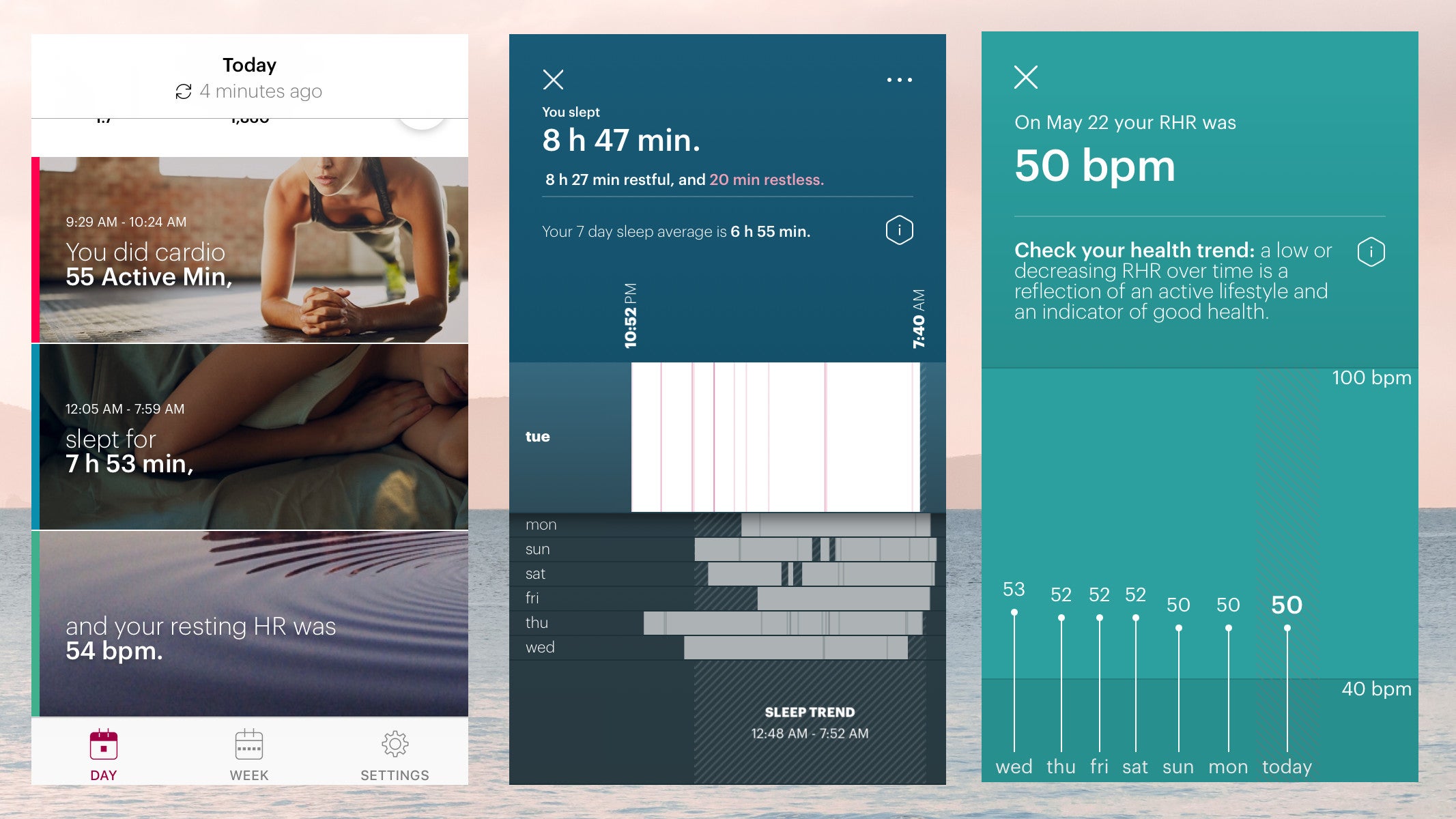 The inside of the ring contains a tiny photoplethysmograph, otherwise known as a flickery green light that measures your pulse. (It checks on you every few minutes, but if it thinks you’re doing something interesting, it will measure continuously.) You’ll see its glow sometimes in a dark room, which I kept fearing would disrupt my young daughter’s cave-like bedtime environment as I put her to sleep. (Fortunately, she either didn’t notice or didn’t care.)

The heart rate feature works great for sleep. Every night, the Motiv would measure my resting heart rate (RHR), which is measured most accurately when you’re lying totally still – perfect. If your RHR starts to creep up over time, that can be a sign that you’re sick or that you’ve been training too hard and stressing your body out. But the fitter you are, the lower your RHR will be, so it’s good to see a low or decreasing number.

Every morning I could check my RHR and see how long I had slept. The Motiv ring doesn’t try to judge your sleep quality, which is great, because a fitness tracker can’t actually know how well you’ve slept. But just tracking the length of your sleep is handy so you can see trends over time. I stayed up late a couple nights recently, and the app shows me that without any judgment. It just stacks up my past week’s worth of sleep data and lets me decide how I feel about that. (Some patterns become pretty obvious, ok?)

It Has No Idea What I’m Doing in Fitness Classes 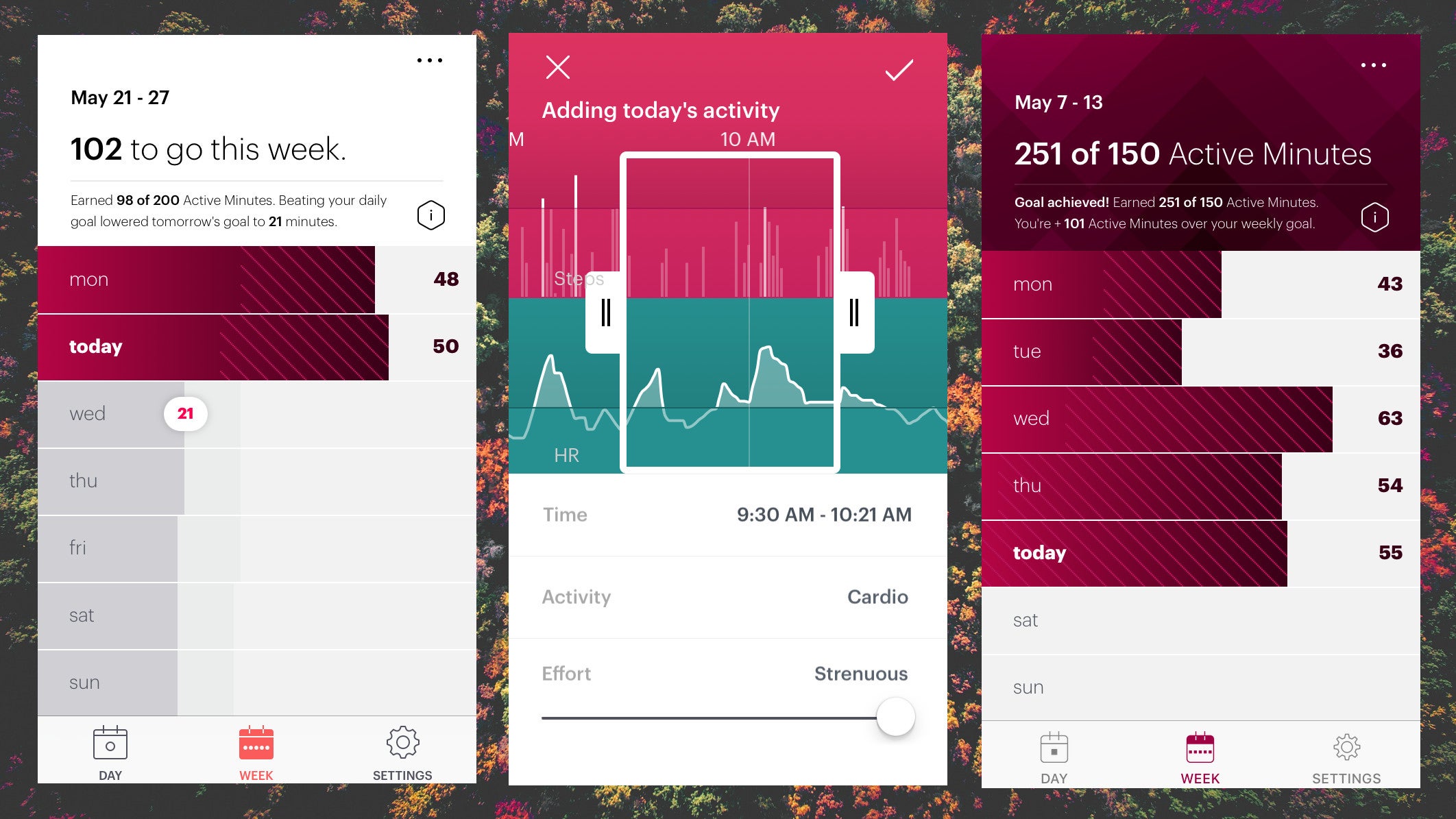 The ring also tracks steps, so if you walk or run, you’ll get an automatic activity added to your day. This seems to be pretty accurate; no complaints there. But it’s adorably naive when it comes to anything else.

For non-step-based activities, detection depends on a combination of steps and heart rate to figure out what was going on. You’ll see a little question in your app, for example: “8:38am – 8:52am: Were You Active?”

Ironically, on days I took a cycling class, the ring would pick up my activity as I walked from my car to the studio (especially if I was kind of jogging because I was late) but remain oblivious to the class itself. In the darkened cycling studio, I finally realised what was going wrong: the ring easily slips out of position, so sometimes I would see the green glow on top of my finger, flickering uselessly into the little gap that can form between your ring and your skin.

If you care about your exact heart rate during exercise, the Motiv Ring is not for you.

It helped to wear the ring on a finger where it fits more snugly, but no matter what I did, I couldn’t get an accurate reading during high intensity activity. During several workouts over the past week or two, I took my pulse and got numbers ranging from 136 to 192. The Motiv ring rarely picked up anything above 150. The heart-rate curves during my workouts often show periods of five minutes or more where the ring says I was at 70 or 100 bpm, when I know for a fact I was in the middle of an intense sprint. If you care about your exact heart rate during exercise, the Motiv Ring is not for you.

But I’m happy just to get a reminder to track my exercise. “Were you active?” is fine for me, and it only takes a few seconds to tap that question and adjust my workout’s start and end. Pro tip: make sure to select “strenuous” if it was a hard workout; otherwise, your hour-long sweat session might only gain you 20 active minutes toward the week’s tally.

The tally is a nifty part of the app. If you’re working toward a goal of 150 minutes of exercise per week (as recommended by the World Health Organization), the app’s week view will tell you how you’re doing on that, and how many minutes per day you’ll need in the rest of the week to make your goal. I set my goal to 200 minutes instead of the default 150, and made my goal two weeks in a row, so I feel like a total badass. It’s worth noting that the WHO recommends 150 minutes of moderate exercise like walking, or 75 minutes of the more vigorous activity that Motiv tracks.

The Motiv ring doesn’t nag you. It doesn’t over-analyse. It just tells you when you slept, how your resting heart rate is doing, and with a little help it can keep track of how much you exercise.

That’s really all the data you can rely on from a fitness tracker, anyway. Tracking heart rate accurately would be nice, but it wouldn’t change my motivation to exercise or my understanding of my own fitness.

The ring costs $US199, although in Australia you’re looking at a hefty markup of around $120. There are cheaper fitness trackers on the market, but I can’t get over the fact that it’s a ring, so it doesn’t chafe under my wrist when I type (like a wristband would) and I don’t have to remember to transfer it (as I would a clip) from my clothes to my pajamas every night.

The Motiv ring is new, so perhaps more features are on the way. The app is currently iOS only, but there’s a partially functional public beta for Android. Meanwhile, other companies are working on their own rings: Oura ring has similar features but is positioning itself more as high-end jewellery.