How To Pick Your First Guitar 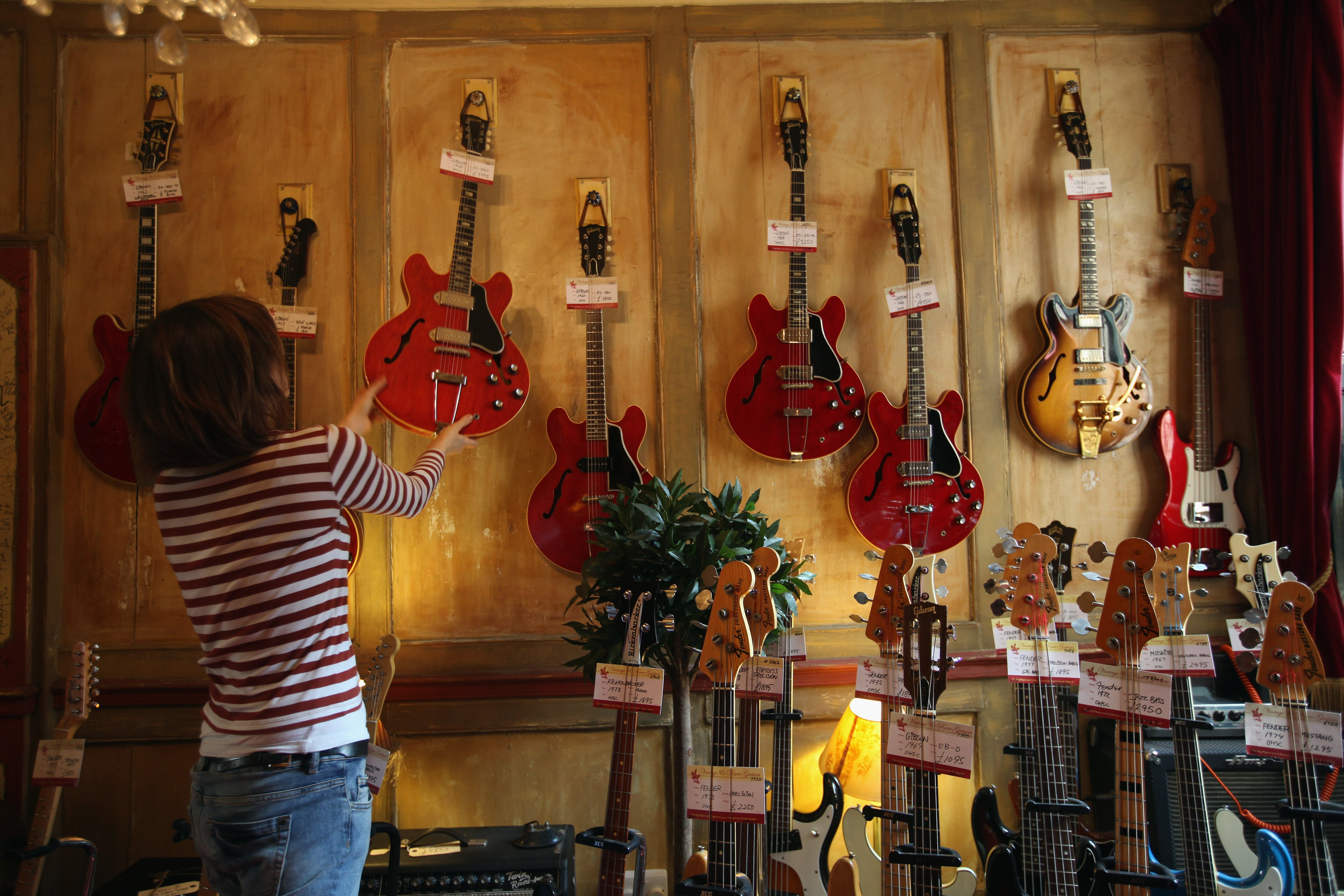 Ready to buy a guitar, but unsure where to start? The worst thing you could do is purchase the wrong instrument and fall out of love with it before you get a chance to dive in. That's where we come in. Here's exactly how to find the right six-string for you.

Decide if you want an acoustic or electric guitar

If you aren't an instrumentalist and you've decided to start playing music with guitar, you might consider going acoustic. They don't need much - you can, essentially, just pick one up and start playing. Electric guitars, of course, require amplification and other various bells and whistles (cables, pedals and so on) that, depending on what style of music you think you'd like to tackle, can become complicated and expensive. Because electric guitars are more involved, they allow for more experimentation in sound, which can be intriguing for the non-novice.

If you chose an acoustic guitar, decide between nylon and steel strings

Steel strings are the standard, but they're harder on your hands than nylon. On the other hand, the steel strengthens your fingertips and builds calluses for future shredding. Nylon-stringed, classical guitars are easier to hold and play when you're first getting started, but they're often specific to classical music. They're also smaller, hollow-bodied guitars, and don't produce as loud, deep and full a tone as a traditional, steel-stringed acoustic guitar. Only you can decide which is right for you.

Get the right size

If you're starting out as a child, you (or, more accurately, your guardian) should look into small-bodied guitars. Most major manufacturers offer miniature (a quarter to three quarters smaller-than-standard) guitars for smaller musicians, and some companies cater to a younger demographic, specifically. Those companies often offer affordable starter kits, too, with everything your child or young adult needs to get started playing guitar without breaking the bank. Remember, if this is your or your kid's first instrument ever, make sure you're investing only as much as you feel comfortable investing. And if you're still unsure about size, ask your local music store attendant, or use the chart below:

It seems like a simple enough idea, but you should only buy the best guitar you can afford. Guitars can range from $100 to tens of thousands (and beyond, for novelty reasons) and spending the most money doesn't necessarily equate to acquiring the best guitar for you. Plus, there isn't much more disappointing than spending a bunch of money on an instrument that doesn't suit your needs. For a starter guitar, spending in the $400 range, at least, is probably your best bet.

Determine, if you can, what kind of musical styles you're most interested in playing

Sound is subjective, sure, but certain styles and genres of music tend to work best with certain kinds of guitars. This is something that will require a bit more research on your end. Say you're super into shoegaze: A Fender Jaguar might tickle your fancy because the guitar is so deeply associated with the indie rock sub-genre. Country music, on the other hand, is much more open-ended and can be performed on a variety of different guitar bodies. Looking to see what your favourite guitarist plays can help in making your decision, but don't let it be the only factor - chances are, they have been playing for decades, and their wants and needs are much different than yours.

If there's a particular guitar you're interested in, do your research

A familiar or popular brand name doesn't necessary ensure a higher quality product, and it certainly doesn't mean that because you like a particular style of guitar, it's the right one for you. Look into the make and model and even the year (in some cases), and read reviews. Go to your local music shop and ask questions.

Don't buy on aesthetics alone, but don't buy a guitar you think is ugly

It seems obvious, but sometimes new guitarists get so enthusiastic about the appearance and cool-factor of guitars, they end up purchasing something for its paint job instead of its musical qualities. The big note here is that you can always slap a custom decal on a guitar, any guitar, but if you're unhappy with how it sounds, it's pretty expensive (if it is even possible) to fix. Make sure you're satisfied with the instrument and its abilities first and foremost, and then go for all the extramusical elements.

Say there's a guitar you're interested in: You've done all your research and you're confident it's the one for you, but it's a couple of bucks out of your price range, and similar quality guitars at a lower price point just aren't cutting it for you. Don't fret! Used guitars exist for a reason. Everything from your local pawn shop to eBay are great resources, but there are a ton of other stores musicians use to pick up discounted devices, such as Haworth Guitars, Allans Billy Hyde or Music Swop Shop in person.

Save some money for accessories

Electric guitars require accessories just to produce sound, as stated earlier, and acoustic/classical guitars aren't exempt: There are always carrying cases and straps and all that stuff to consider. Make sure you're taking that into account when making your purchase.

When in doubt, consult a professional

If you've taken all of the steps above and still find yourself a bit unsure of what you want to buy, go to your local music store and ask someone who works there. Failing that, ask a musician friend. Music is a lived art, after all, and making a decision as important as buying a guitar - your first or your 20th - should be one you don't rush.