The Internet was abuzz recently following a report that a Portland, Oregon family's Amazon Echo allegedly recorded a 'private conversation' and sent it to a 'random stranger'. That sounds a lot more sinister than what actually happened and, thankfully, there's a trick you can do to ensure this doesn't happen to you.

Amazon’s argument to the erroneously-sent message was that the Echo must have thought it heard a command. A good rule of thumb is to avoid saying “Alexa” in general in your home when you don’t want to interact with the device. That said, I know I’ve been watching TV in our living room, with no mention of Alexa from myself or the television, and she’ll chime in to let us know she didn’t quite hear something.

The Verge pointed out today that you can check on what your Alexa does hear by going into the Alexa app. When you find things you’d rather not be in her history, you can also delete them on the spot.

To see what your Alexa has been listening to, launch the Alexa app on your phone and then tap the hamburger (those three lines stacked on top of each other) icon at the top left side of the screen. From there, tap “Settings” and then “History”. 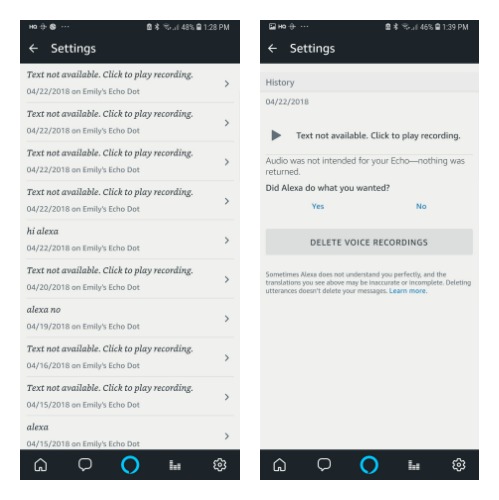 This goes a little deeper than what you see on your home screen and shows both successful and unsuccessful commands.

For some, you’ll see “text not available” for a command. You can tap into those and see what exactly it was Alexa heard and thought was intended for her.

For me, that answer is a lot of Suits, which I was binge-watching last month. If you find recordings you’d like to be removed, you can also delete those right in the app.

It isn’t going to prevent you being involved in a mishap (although that seems unlikely to begin with), but it can help you be more aware of what Alexa is picking up so you can change your habits (or change her location) to prevent any problems in the future.