For many of you, a single pair of speakers or headphones is all you probably need for your desktop or laptop system. For others, rocking out, gaming, and listening to movies is a constant battle with Windows over which connected audio device the operating system should use to blast noise.

I mainly listen to everything on a 5.1 surround setup, except for when it’s late at night (sorry, roommates) or when said roommates are being loud AF in the living room and I want to drown out their movies with my noise-cancelling headphones (sorry, roommates).

It’s a lot easier to switch your audio device in Windows 10 nowadays — just left-click on the icon in your task bar and pick a new playback device from the (drop-up?) menu. But you can now exert even more control over your audio devices, thanks to a new feature found in Microsoft’s Windows 10 April 2018 update. 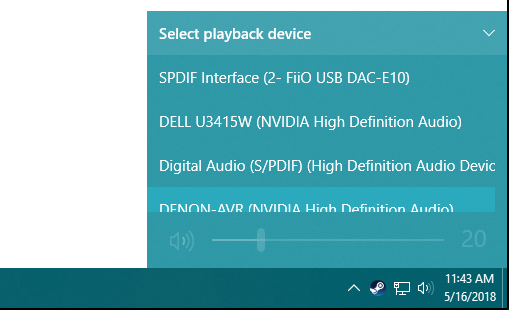 Windows 10’s audio customising is great, when it works

Right-click on the audio icon in your taskbar and select “Open Sound settings.” In the window that appears, scroll to the bottom until you see “Other sound options,” and then click on “App volume and device preferences.”

The “App volume and device preferences” screen is a new Windows 10 feature that allows you to customise your sound and speaker preferences per app. For example, you can start by assigning a default speaker for Windows — your 5.1 system, let’s say. Give it a default volume, too, which is what goes up and down when you adjust the volume on your keyboard or from within the OS. 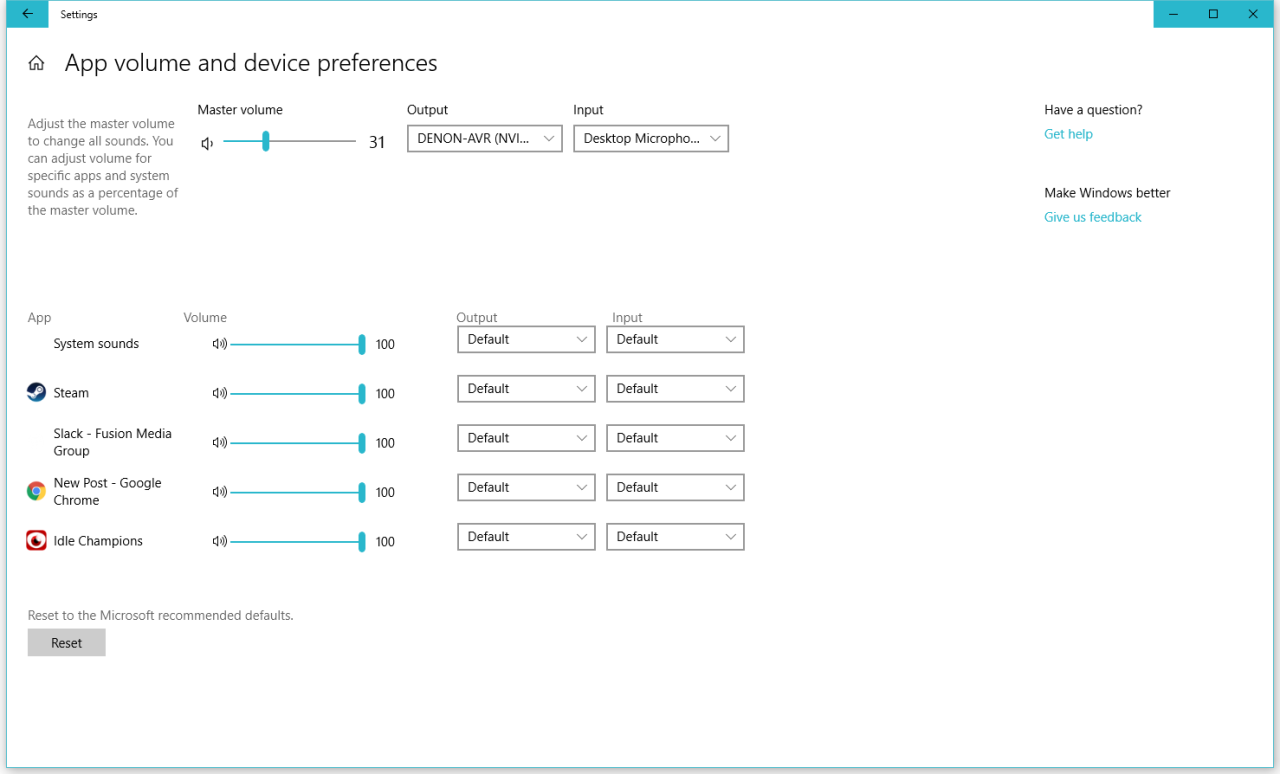 On the bottom portion of the screen is a list of all of your currently running apps. You can now set a specific volume for each, which is actually a percentage of your system’s default volume. (So, setting an app to “100” won’t blow your ears out; it will just make the volume 100 per cent of whatever your regular system volume is. Set it to 50, and that app will be half as loud as your system’s normal volume, et cetera.)

One note: When you set volumes on a per-app basis, you don’t get a handy little “ding” noise to tell you how loud the app might be, so you’ll be doing a bit of guessing.

Getting granular with your audio: headphones or speakers?

The real interesting part of Windows 10’s “App volume and device preferences” is the output drop-down menu. That’s right. Not only can you customise specific volumes for each app, but you can also tell Windows how you want to listen to it.

For example, If you’re always playing Fortnite on a headset (so you can taunt everyone else when you get the Infinity Gauntlet), have the game’s sounds output there instead of your other speakers. If you prefer to fill your room with sound whenever you strike up Spotify, make sure you’ve selected your crazy Dolby Atmos setup instead of your dinky monitor speakers.

Once you’ve made your selection, you might have to restart your app or game in order for it to take effect. In some cases, this setting might have no effect whatsoever. No matter what I tried, I couldn’t get Windows to push sound to my headphones instead of my default speakers for my Steam or Battle.net games, but the prioritisation worked great for watching videos in Chrome, the Spotify and Netflix Windows 10 apps, and Fortnite (via Epic Games’ launcher), to name a few apps and games.

In other words, Windows’ implementation isn’t perfect — that, or some third-party apps just get fussy with it — but it’s a useful little trick to play around with if you’re tired of always having to switch speakers manually.