How Telstra And Vodafone Can Sell You ‘Unlimited’ Mobile Data, With Limits

Both Telstra and Vodafone unveiled unlimited data plans for mobile customers this week and some are, again, questioning the use of the term ‘unlimited’. Rightly so! We’ve seen it all before with ADSL broadband, they say!

This time it’s a little different. The telcos have wisened up.

When we posted about Telstra and Vodafone’s new unlimited plans this week, Lifehacker readers were quick to point out that these plans aren’t actually unlimited. In both cases, the telcos provide a data allowance at maximum speed, but once that allowance is hit – they shape the connection to 1.5Mbps.

There’s been trouble with these kinds of deals before. In 2011, the ACCC declared Optus’s “unlimited” advertisements misleading and deceptive. “It is simply unacceptable to make bold headline claims like ‘unlimited’ and then to bury important conditions or qualifications in the fine print” claimed ACCC chairman Graeme Samuel, at the time.

Moreover, it wasn’t just the ‘important conditions’ that mattered — but the effect of those conditions. Samuel explained in the 2011 case that “simply disclosing the existence of a condition may not be enough… the Act also required Optus to explain to consumers the effect of the condition on the functionality of the service being provided.”

So how would the ACCC see advertisements like the one currently plastered over Vodafone’s Unlimited Mobile Phone Plans homepage? 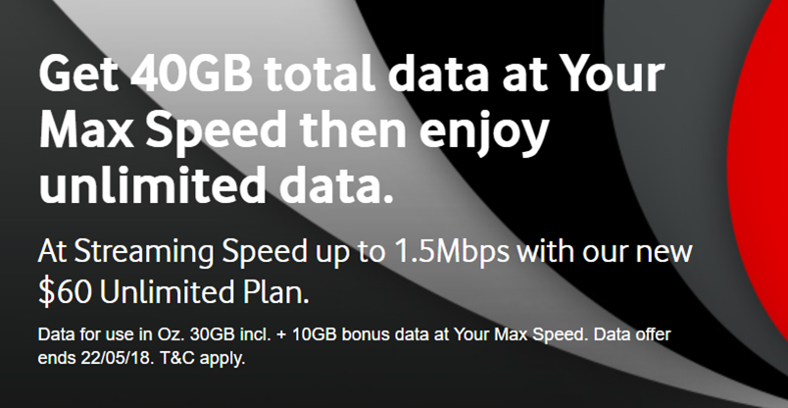 Further down this page Vodafone reverse the plan, by offering Unlimited data at ‘Streaming Speeds’ up to 1.5Mbps in Australia, then tacking on the extra data at Max Speed. For many, the different approaches in advertising may not be deliberately obfuscating the terms and conditions, though they are likely to leave some customers confused.

How about Telstra’s advertising for their ‘Endless’ data plan? In both cases it doesn’t appear that the telcos are being overtly shady about the practice of shaping your internet speeds, but the lack of information in these forward-facing advertisements could get them into some hot water. For Vodafone specifically, they word the deal in such a way that they offer a data limit as Max Speed and then give you unlimited data (at 1.5Mbps).

Similarly, Telstra’s use of the infinity symbol and UNLIMITED GB does make their ‘Endless Data’ plan relatively transparent. I admit, at a glance, there could still be confusion but if they’re separating the idea of ‘unlimited data’ and ‘unlimited speeds’, they are qualifying their offer. Of course, the fine print also says that Telstra’s Fair Use Policy applies to the Endless Data service, so if Telstra deem your usage ‘unreasonable’ or ‘unacceptable’, they have the right to cancel or limit your service anyway.

Using the terms ‘unlimited’ and ‘endless’ are perfectly reasonable and skirting the edge of those legalities around advertising telco deals.

Notably, the Telecommunications Consumer Protections Code (TCPC) does contain a specific clause relating to using the term ‘unlimited’ in advertising materials. The clause is printed below:

A Supplier must include any important conditions, limitations, qualifications or restrictions about an Offer in its Advertising of the Offer, to allow Consumers to make informed choices and to avoid Consumers being misled.

A Supplier must not engage in the following practices to enable this outcome:

Unlimited: use the term ‘unlimited’ or an equivalent term in an unqualified manner when referring to usage, unless the ordinary use of the service in Australia is genuinely unlimited and not subject to exclusions, including exclusions for various types of calls or usage, or selected parts of the network;

A spokesperson for the ACCC told Lifehacker “the ACCC has previously taken action across various sectors where businesses have used absolute claims such as ‘free’ and ‘unlimited’. Whether or not concerns arise will depend on the circumstances” before directing consumers to the TIO or ACCC to lodge if they believe they have been misled about terms and conditions.

Based on the clause in the TCPC, ‘unlimited’ is a dangerous word to use unless it truly is unlimited. However, based on the 2011 ruling against Optus, as long as the telco is providing the qualifications of the ‘unlimited’ data plans upfront and ensuring the consumer is aware of how the limitations will affect their service, they are then separating the idea of unlimited data from unlimited speed. A crucial factor.

Overseas, in places like London, you can get truly unlimited data with plans such as Three’s “All-You-Can-Eat”. The only condition being that the telco politely asks “that you use these for your personal use only and not for any illegal, commercial or improper purposes.”

Now that — that is an unlimited data plan.

Our friends across the ditch in New Zealand at 2degrees mobile? They offer an unlimited data plan, without shaping speeds, but that excludes tethering or mobile Wi-Fi hotspots and a Fair Use policy.

Conversely, US carriers such as AT&T and T-Mobile advertise ‘unlimited’ plans with data limits and streaming-quality compromises. It seems that Australian telcos are headed the same way.

Telstra Finally Has An Unlimited Data Phone Plan (And It's A Goodun!)

Telstra has been infamously stingy with its mobile data allowances in the past, but that could be set to change. The telco just announced the launch of its first smartphone plan with unlimited data - and it's better than expected! Here are the details.

Where Telstra and Vodafone are likely to run into the most trouble is when people start hitting those soft data caps. If you’re on an ‘unlimited’ plan and get shaped to 1.5Mbps how will that affect the user experience? While Telstra suggests this speed will be enough to stream standard definition video – how does that work in practice, during peak hours, on a congested network? Is it enough that Telstra put those qualifiers in? Will those speeds actually be able to provide the experience that users want — or expect — based on the way they are advertised?

Our advice for those looking at unlimited plans: Proceed with caution. As long as you understand the limits of your unlimited data plan and are happy to accept them, then go for it. They do provide some pretty hefty data limits! However, it might be worth investigating plans that offer similar data allowances (40GB, 60GB etc.) and comparing them first – especially because they won’t shape your speeds.

Are you the type of user that will struggle to hit 40GB a month anyway? Then these plans are not for you.

Further to that, if you’re only getting maximum speeds up to a certain data limit, why not just spend less money upfront elsewhere? Think Mobile, which also uses the Vodafone network, are only going to charge you $37 a month for 40GB and include unlimited calls and texts. That’s practically the same as the Vodafone offer for $23 less. Of course, if you hit the 40GB, you will be charged for extra usage.

Ultimately, it seems that our telcos have wisened up to misleading consumers with ‘unlimited’ and ‘endless’ plans, learning from the mistakes of ADSL broadband some seven years ago. Whether or not they come under fire from the ACCC will be up to the consumer and how these mobile plans stack up once they’ve shaped their speeds.

With the way we use our phones dramatically changing – and other telcos getting in on the act – Vodafone have today (also) unveiled new Unlimited Data Plans.”]