9 Anime Worth Watching On Netflix

The streaming giant is well known for their original movies, sitcoms and investments into various franchises, but Netflix's library of anime content has grown nicely over the last few years as well. Here's 9 films or series that are worth your time.

If you don't mind your anime on the brutal side, then the latest iteration of the Devilman franchise, Devilman Crybaby, might be up your alley. The Devilman series began with the tale of Akira Fudo, who is soon possessed by a demon. Relying on a friend, Akira overcame the will of his inner demon to become Devilman, one demon to rule them all.

Crybaby covers a lot of similar ground, with Akira incorporating the powers of the demon Amon but retain his human soul to prevent the destruction of humanity. The big key with the Netflix version is the more modern setting (smartphones are a thing) and a heightened focus on sex and violence.

Whether you should watch Brotherhood before working through the original Full Metal Alchemist is a different question entirely, but one way or another, FMA: Brotherhood is worth your time.

Brotherhood is an adaptation that more closely follows the plot of the source material. The original FMA anime deviates from the manga about halfway through, after Hiromu Arakawa (creator of the FMA manga) requested a different ending for the anime. As a result, I'd recommend just watching Brotherhood especially given that the two series tend to cover the same ground in the early episodes.

Differences aside, FMA is well worth a watch regardless. The series covers the journey of alchemist brothers Edward and Alphonse Elric as they search for the Philospher's Stone, in a quest to revive the latter's body following a failed transmutation. It's equal parts funny, grim and surprising, as the Elric brothers come to grips with the machinations of the state military and a divided world.

The original FMA is streaming on Australian Netflix now, while FMA: Brotherhood is only available through Netflix in the US.

One of the early Netflix original anime series, Knights of Sidonia is a deconstruction of the space opera genre. The story focuses on Sidonia, a colony ship in space housing a genetically altered branch of humans.

The human race had been battered to within an inch of its life by the alien Gauna, and so to recover their losses scientists used genetic engineering to create humans that rarely need to eat or sleep.

It's an anime that takes physics a little more seriously than most space operas, while offering an intriguing look into a manufactured humanity, struggling to survive. If you enjoyed the principle of, say, Macross but you'd prefer to see those mechs in a setting where fuel is a factor and humanity isn't able to joke its way around its own demise, Knights of Sidonia is worth a watch. 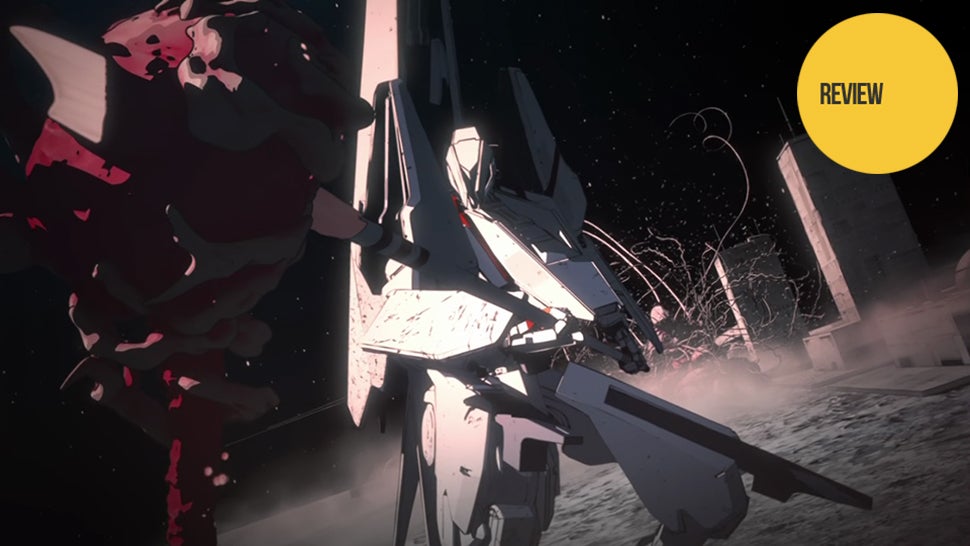 Knights Of Sidonia Is A Mecha Anime With A Realistic Twist

An isolated human colony ship is on the run from aliens and the only effective defence they have left are giant robots. No doubt, you've heard similar setups before; but Knights of Sidonia plays the situation completely straight — from the real world physics to the societal implications.

A franchise that has gone around the bend for almost two decades, GANTZ:O is a CG spin-off of the series that features 17-year-old Masaru Kato. Kato has woken up in a room with a bunch of people, all of whom have died.

In the room is a giant black ball called Gantz. It's later explained that everyone is pitched in a game of survival, where they have to kill off a range of monsters attacking Japan within a certain time limit if they want to survive.

A feature-length movie, GANTZ:O is streaming on Australian Netflix in English.

The second season of Castlevania hasn't dropped yet, but until then you can enjoy Netflix's reimagining of the series inspired by the iconic games. As a short series it's a fun screenplay largely drawn from the timeline of Castlevania 3. 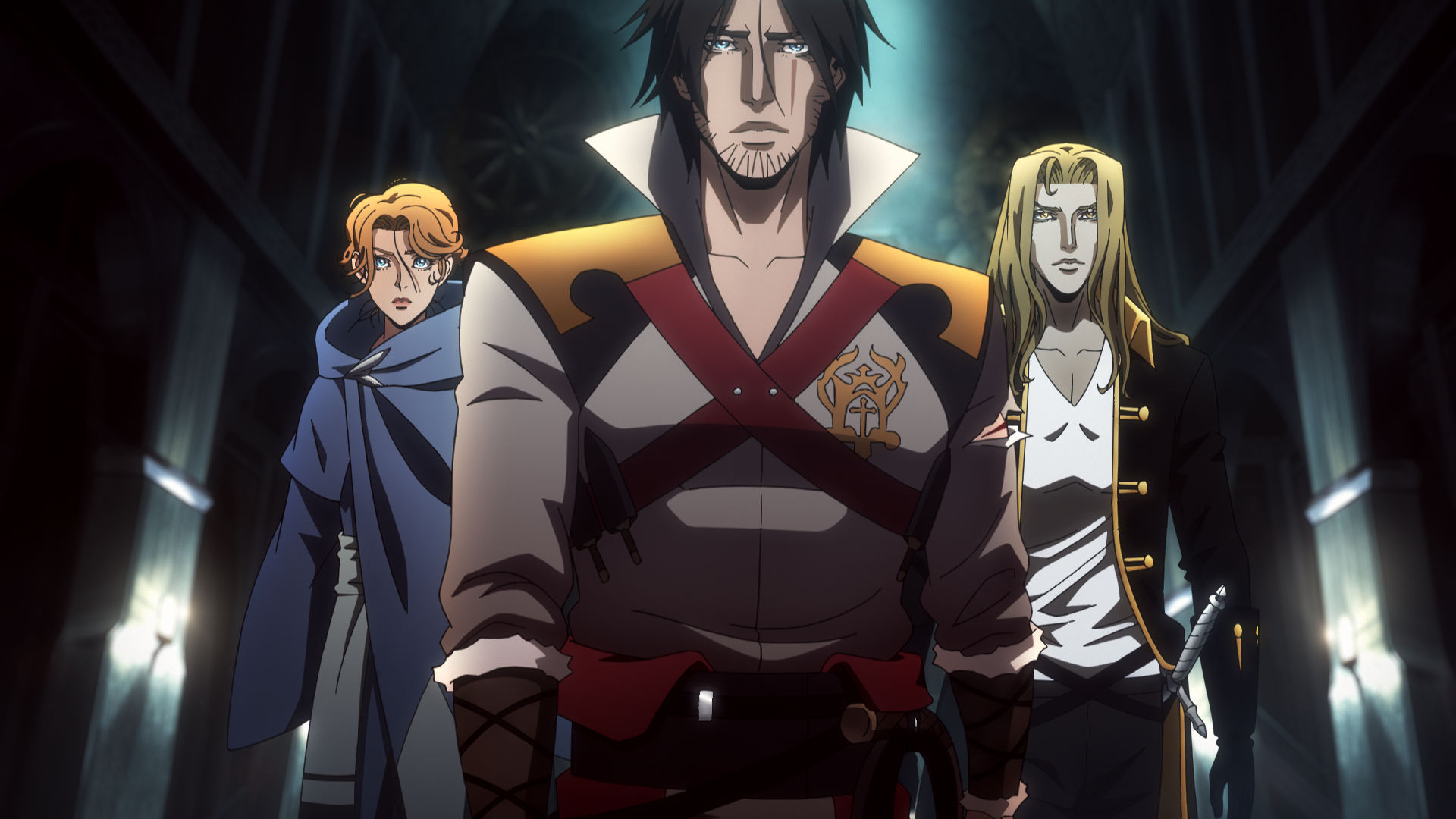 Castlevania looked pretty dang cool when it hit Netflix last month. Part of the reason is the fact that the folks at Powerhouse Animation have been waiting for the chance to do a project like this for ages. Hell, they practically stalked the producers.

I'm not one to put much stock into whether Castlevania properly qualifies as anime, given it was basically produced entirely in the United States. I don't think it largely matters: fans of anime have no trouble enjoying, say, Avatar: The Last Airbender, despite its American roots. But if that's something you care about, there you go.

And while Castlevania isn't perfect, it's a great homage to OVAs of the '80s and '90s. The four episodes are based on a script that was approved by Konami over a decade ago. Netflix greenlit a second season of Castlevania last year, with eight episodes due to be dropped online sometime this winter.

FAQ: people keep asking, so I guess word didn't get around? We're coming back this summer, for eight episodes, from @Netflix. pic.twitter.com/HckIke4REI

Little Witch Academia is what happens when you take trademark Japanese cuteness and mix it with a world of magic, ala Harry Potter. Makers Studio Trigger released Little Witch Academia as an animated short on YouTube, which generated enough interest to successfully crowdfund a feature-length sequel a couple of years later.

The magical mishaps of Akko and her friends has since spawned a full series, which you can stream on Netflix as well. It's charming Harry Potter. What's not to like?

After discovering that he is from an immortal race called the Ajin, Kei finds himself fleeing before being turned into a test subject. Ajin don't actually heal until they're dead, you see, making him an ideal target for unethical researchers. Amidst all this, there's a ¥100 million bounty up for grabs for capturing an Ajin.

So what do you do when you wake up, only to discover the world around you has declared you persona non grata? That's the general gist of Ajin, which also uses the same CGI style as Knights of Sidonia. The facial expressions are especially good, although note that this anime is more on the violent side.

Tsutomu Nihei's Blame!, first published in 1998, is a masterpiece in comic story-telling. Its 2017 animated adaptation, recently released on Netflix, is nothing like it.

This isn't the first anime adaptation of BLAME! either, with an earlier anime released in 2003.

One of the older offerings on Netflix, Gunslinger Girl on the surface stars a bunch of cybernetically-enhanced underage girls wielding enormous weapons. But what it's really about is the relationships between people with vastly shortened lives and life expectancies, due to the nature of their work, and how those characters deal with the pressure of the unusual world around them.

The series centres on the girls rehabilitated by the Social Welfare Agency, which claims to rebuild the lives of children with severe disabilities and critical injuries. What ends up happening is a process of cyberisation and brainwashing on the behalf of the Italian government, with the agency's assassins dealing with adolescence and their attempts to maintain their humanity.

What anime have you seen on Netflix that you'd recommend - and what series would you like to see get the Netflix treatment?