UNICEF Australia Wants To Use Your Computer To Mine Cryptocurrency

You may have heard some of the stories about how websites can, without your knowledge, harvest your computer’s processing power to mine cryptocurrency.

UNICEF Australia want to use that technique for good: To generate cryptocurrency they can turn into real funds.

Launched today by UNICEF Australia, The HopePage is a website that allows Aussies to easily ‘donate’ funds to UNICEF by letting them user your computer’s processing power. Instead of a cash donation, the HopePage uses your processor to solve the algorithms associated with ‘mining’ cryptocurrency, which then can be turned into real funds for UNICEF.

It’s a relatively simple process. Once you open the website, you simply click the “Start Donating” button and move a slider to explain how much processing power you’re willing to give to the effort. It defaults to 60 per cent, but you can set it to use anywhere between 20 and 80 per cent. 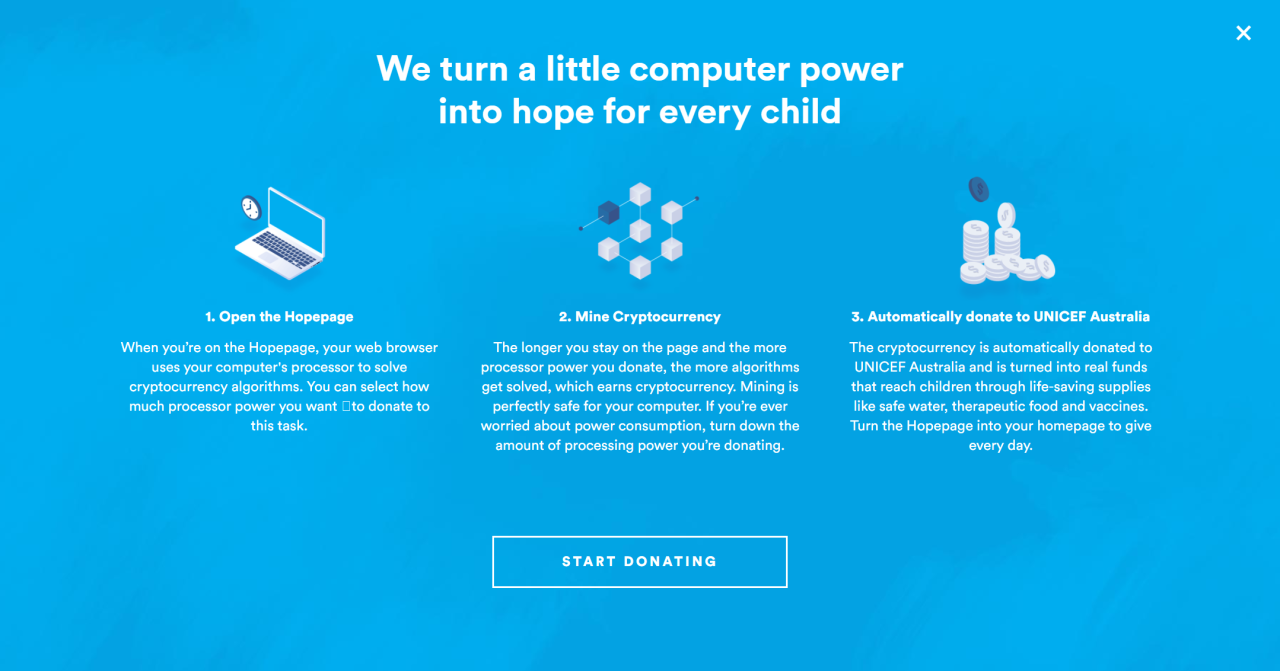 UNICEF claim it is entirely safe, storing no personal information.

The fine print shows that UNICEF Australia are using Coinhive – which is mining software used to generate the cryptocurrency “Monero”. According to CoinMarketCap, Monero is currently the world’s twelfth biggest cryptocurrency, with one coin worth about USD$256.

How much money can this raise, in reality? It’s hard to say. The more ‘hashing power’ that users can generate, the more ‘hashing power’ that UNICEF has access to and thus, the faster that power can be ‘converted’ to funds. Having spent time on the site most of the morning, it looks like there is a stable user base of around 1500 users on the webpage. A lot of factors play into how much real world money this would generate but, with some quick math, it could be upward of $500 a month.