In the future, tattoos may no longer be mere decorative statements for the body, but useful biomedical devices that can alert us when something’s not quite right.

In new research out of Switzerland, scientists have created a tattoo that becomes visible on the skin of mice only once it has detected elevated levels of calcium in the blood.

It works like this: First, they engineered cells to contain a calcium-sensing receptor. Those cells are the “tattoo,” and when in the body they can constantly monitor the concentration of calcium in the blood. Cleverly, the scientists also engineered the cells to produce a dark pigment, melanin, when they come into contact with especially high calcium concentrations. When the cells sense the elevated calcium levels, they appear on the surface of the skin as a dark patch.

To test the idea, they implanted the engineered cells under the skin of mice that were afflicted with either cancerous tumours that cause hypercalcemia (too much calcium) or tumours that do not affect calcium blood levels. As they hoped, the tattoos only showed up on the skin of the hypercalcemic mice. The mice exhibited no other symptoms of their tumours during the 38-day experiment, but the appearance of the tattoo was a red flag that something was wrong. 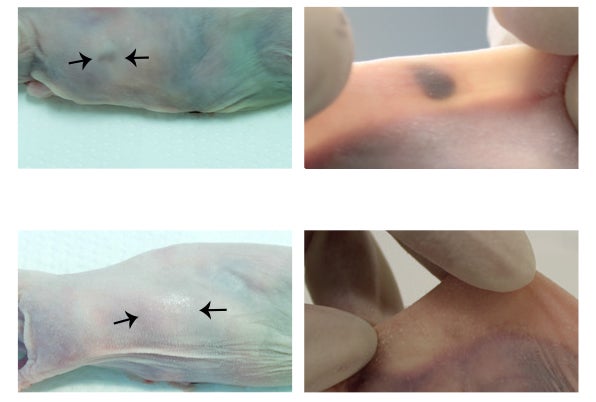 In the top row, hypercalcemic mice display the “tattoo.” In the bottom row, mice without the condition do not. Photo: A. Tastanova et al. Science Translation Medicine

Eventually, the scientists envision such tattoos could be a useful diagnostic tool, since elevated calcium levels are a sign of some ailments, including some cancers. They think the same concept would work with cells designed to detect other biomarkers of disease, too. An inconspicuous mark on the skin could act as an early warning sign. Plus, it’s pretty hardcore.

The tattoo is still in the early stages, but one day, the authors said, it could offer clinicians a way to detect disease before patients exhibit any symptoms.