The Words For Gaming In Different Languages 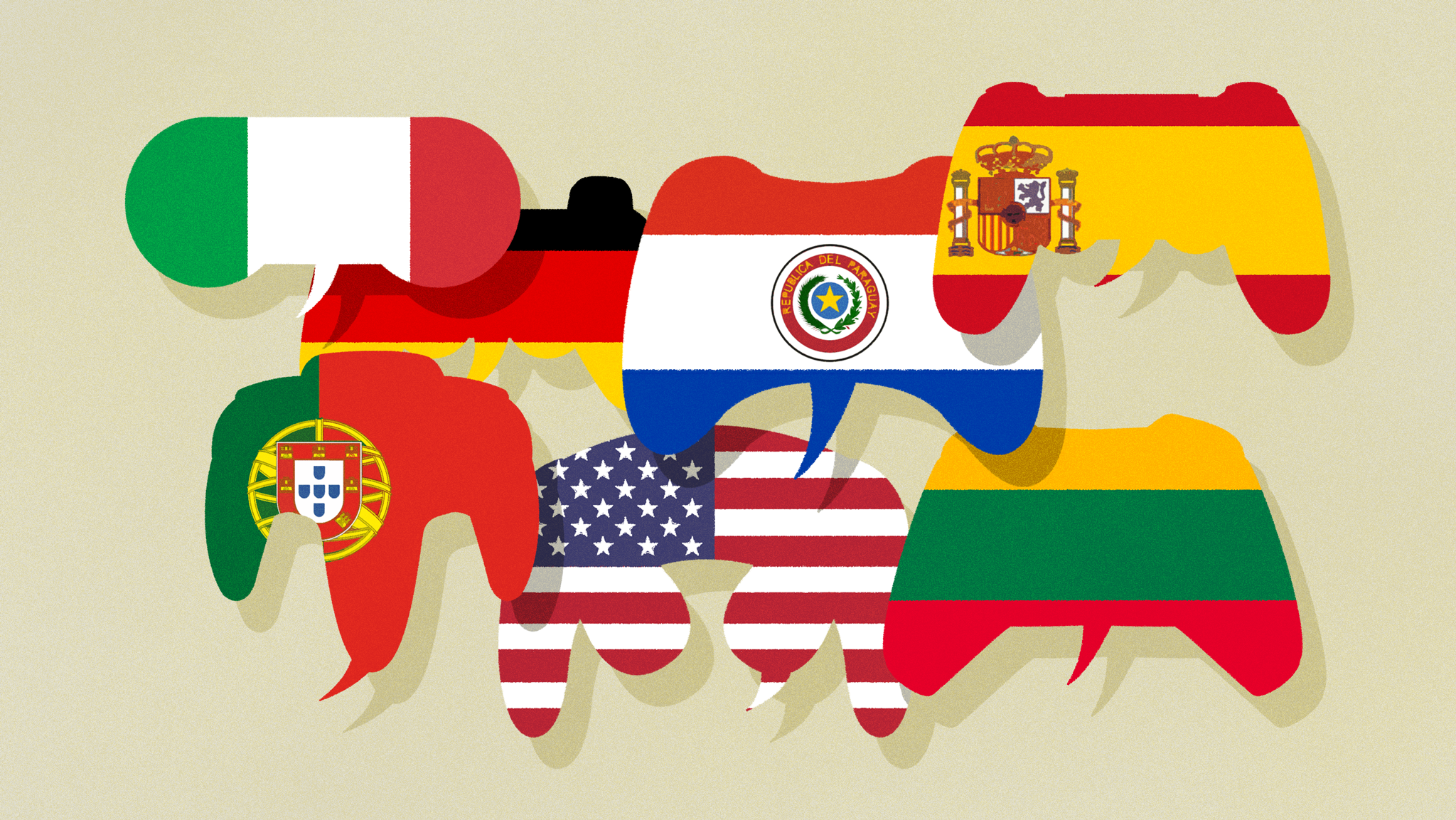 Like any community in the world, people who play video games have collaboratively created their own language and slang. Many of these words are international, but different languages have different ways of talking about play.

The language of gamer culture can be pretty adversarial and aggressive, as well as super-commercial. Anyone who writes about games is constantly brushing up against the limitations of the words we use to describe them ("gameplay", "mechanics", "content", "consumer", "level" - even "gamer"). I strongly believe that the way that we talk about games actually limits the way we think about them.

It got me wondering: What are the words for gaming like in other languages? I asked linguist and non-English-native friends and people on Twitter to share some of their languages' gamer slang.

Such is the dominance of the English language in game development across the western world that many languages simply use the English loan word when referring to people who play video games: Gamer. Sometimes it's incorporated into native syntax - in German, there are expressions like "Gamersprache" (a word for "gaming slang").

Dutch gamers use "gamen" as a verb - the literal word for "to play" is "spelen", but the association there is more with toys and board games.

Even the Japanese use the English loan word ゲーマー (ge-ma). Interestingly, the words "casual gamer" and "core gamer" have also made their way into the European gaming lexicon, though in Japan you can be referred to as a "light gamer", "middle gamer" or "core gamer". Italian, French and Spanish all use the words for "player", the same word you'd use for a sportsman or someone who plays an instrument. Italians use "giocatori"; in French it's "joueur"; some parts of Spain and Latin America use "jugador", which is one of my favourites.

In Paraguay, the diminutive word "jueguitos", which could be interpreted as "little games" and comes across as a little derogatory, has been reclaimed by gamers. Another cool bit of gaming slang from Paraguay: If someone on your team is no good, they might be called a "paquete" or "paquetón" - a package/big package. Geddit? Because you have to carry them.

Lithuanians have a weird word for gaming: "Kapoja", which literally translates to "chop up". ("I'm gonna chop up Mario Kart, wanna join?") The Germans have their own words for "gaming" as a verb, too: "Zocken", which comes from an old word for "to risk" or "to gamble" and the less common but rather cute "daddeln".

In Singapore and South-East Asia, 玩 is the verb for "to play", but the verb for "to hit" (打) — referring to literally hitting buttons — is also used. In Cantonese it's the same verb, 打機, "hit the machine". In Nupe, a Nigerian language, people "throw" games ("che").

There's more variation when you look at the different words for finishing, beating or completing a game, and this can reveal some interesting cultural differences. Even in the English-speaking world, North Americans talk about "beating" a game where Brits talk about "finishing" one.

In Britain and Ireland, back in the days of arcades, you'd "clock" a game, a phrase which could be traced back to the way that older games simply started again once you finished the last level, like a clock resetting. The French "finish" their games as well ("finir"), though if you blazed through a game, you might say you "torched" it ("torcher").

Japanese players talk about "conquering" ("攻略する," pronounced "kouryaku") or "zenkuri" ( "全クリする," literally "full clear", a combination of the character for "all/everything" and a shortening of the English loan work クリア, "clear"). You might also use コンプする - konpu suru - a contraction of the English "complete" with the Japanese "suru", an all-purpose verb for "to do". The Dutch "play out" a game ("uitspelen") and the Portuguese "zero" it ("zerar"). Norwegian uses the word "runde" — to "get around" or "circumvent" a game.

Similarly, in Chile the Spanish "dar vuelta" is used, which means "to turn". Some Norwegians say they "completed a lap" of a game ("Å runde et spill"), and the Swedish "drive" it. The Polish "walk through" games ("przeszedłem grę") and also "play in a game" rather than "playing a game".

Not every culture sees games as something to be beaten or conquered. Other languages communicate a less adversarial attitude towards gaming with their words for play. Interestingly, because gamer culture is primarily located online, there's much less variation between gamer culture and language across the globe than there is in, say, sport, or other primarily offline pursuits - but it also means we speak a shared language.

RPG might be an English acronym, but its meaning is understood all over the world.

Thanks so much to everyone on Twitter who contributed their local insight for this article, especially Lars!, Thijs Kaagman, Ben Kaestner-Frenchman, Enrique Bernardou, vegard busk, Elliot Gardner, Anders Lønning, Artur Pasiek, Edward Choy and Umar Kawu. If you've got more interesting slang to share, hit up the comments.