Is It Legal For Retailers To Cancel Sales Due To A ‘Pricing Error’?

Earlier today we reported on a pretty unbelievable HP laptop deal available at JB Hi-Fi, that was hunted down by a user on OzBargain. Shortly after posting, the laptop deal had been removed and JB Hi-Fi confirmed that the price was posted in error. Those that had ordered the laptop online later found out that JB Hi-Fi would not be honouring the sale. Is this legal?

In general, when a retailer incorrectly prices an item, it is up to them to individually decide on the recourse, dependent on their terms and conditions. If you were one of the multiple users that jumped on the deal this morning, you may be receiving or have already received a phone call stating that JB Hi-Fi will not honour that price and they will, instead, refund you the amount you were charged.

Is JB Hi-Fi allowed to do that? 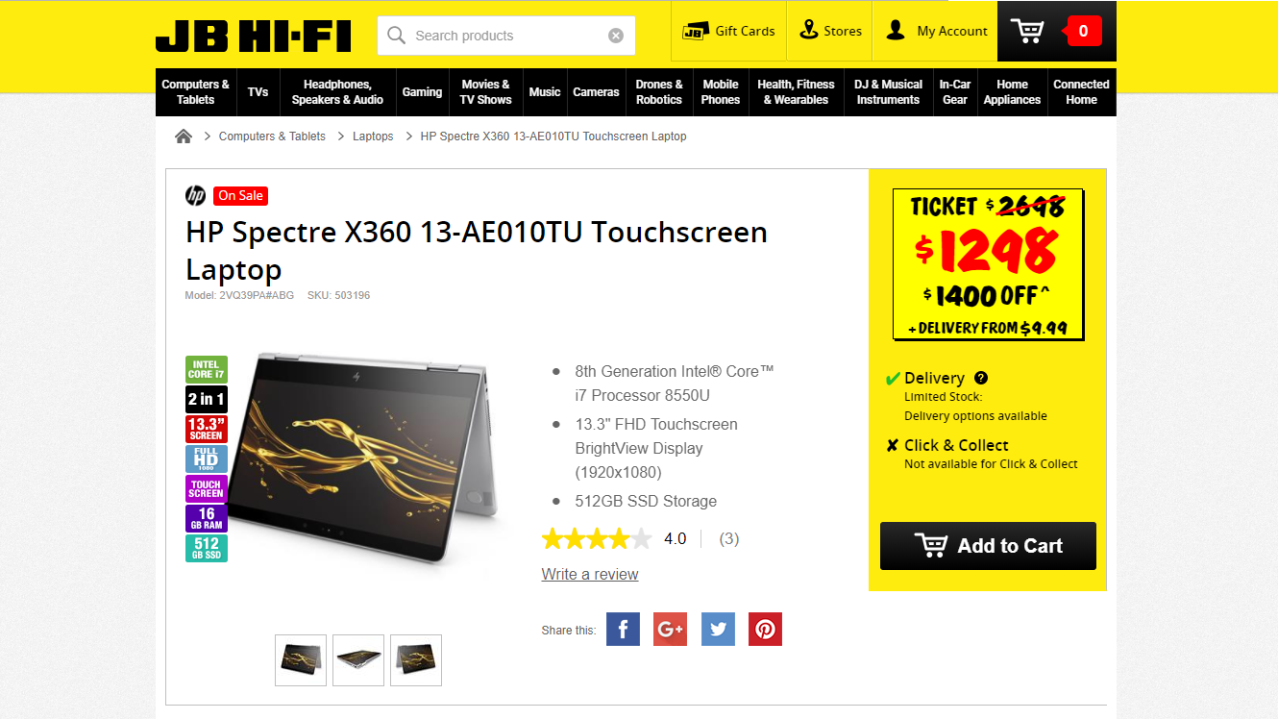 The HP in question – advertised at $1400 off, in error on JB Hi-Fi’s website at 8am this morning

Well, yes. JB are not legally obliged to honour an advertised price if it is in error – which this case certainly seems to be.

I guess with a bit of legalese thrown in there, a contract between two parties has to form during a sale – an offer and acceptance of that offer. If that offer has not been accepted by the retailer then they are still within their rights to explain to you that the pricing is in error and deny you that price.

Working in retail for several years, this occurred multiple times. Products advertised at a lower price in error were usually corrected at the point of purchase and at the registers before the incorrect price was honoured. However, places like JB Hi-Fi have been known to be a little lax on not honouring incorrect prices. On the right day, you might find a salesperson willing to do you a solid. That’s the stone cold truth of it.

On the other hand, it’s a store’s Terms and Conditions that usually provide a solid out.

In the case of JB Hi-Fi and the HP Spectre X360, their website Terms of Sale has this particularly pertinent clause (emphasis our own):

JB Hi-Fi reserves the right to cancel, at any time before delivery and for whatever reason, an Order that it has previously accepted. JB Hi-Fi may do this for example, but without limitation, where:

(a) JB Hi-Fi’s suppliers are unable to supply Goods that they have previously promised to supply;

(b) an event beyond JB Hi-Fi’s control, such as storm, fire, flood, earthquake, terrorism, power failure, war, strike or failure of computer systems, means that JB Hi-Fi is unable to supply the Goods within a reasonable time;

(c) Goods ordered were subject to an error on the Website, for example, in relation to a description, price or image, which was not discovered prior to the Order being accepted;

Where things get murky are the fact that their Terms clearly state “prior to the order being accepted”. If you were to go into a store and get the laptop, you would have scored yourself an excellent deal. It would have scanned up at the discount price – and unless the salesperson knew it was in error – and your wallet would be thanking you.

However, because many orders were placed online, it’s a little harder to discern the point of sale and acceptance of payment as finalising the sales contract. Thus, JB are within their rights to cancel the order and refund a customer before they send out the heavily-discounted HPs.