As part of a promotion run by The Economist, a pop-up ice-cream stall opened in Martin Place for the day, right near our offices in Sydney. Awesome! I love ice cream! I’ll go check it out, I said. The catch? The ice-cream was filled with insects. I was already in too deep to back out.

Now you, dear reader, get to experience what it is like to fill your mouth with dairy and dirt-dwellers. Hakuna Matata.

Before I arrived at the stall, I headed to the local supermarket, grabbed some yoghurt, a chilli chicken sandwich and a bottle of water. If I was going to eat insects, I was going to have a nice little chaser afterward.

As I approached the stand a lady seemingly appeared out of nowhere in front of me and said to the attendant ‘I’d love some free ice cream’ and the attendant said ‘I do have to tell you that this ice cream has insects in it’ and the lady, taken aback, said ‘oh my god, oh no’ and trotted away. 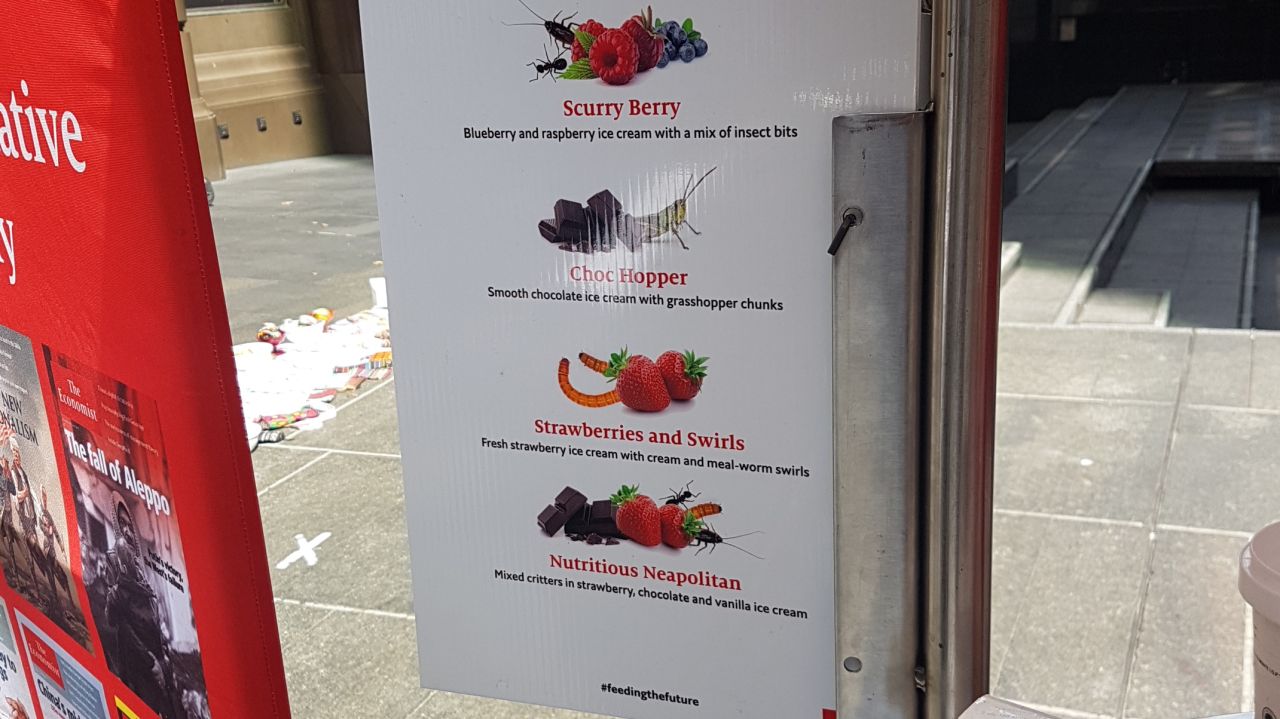 While I waited, the attendant at the ice-cream stall assured myself and the other entomophagists that these insects are ‘farmed and are safe to eat’ and that they don’t taste like anything in particular, they’re ‘just crunchy’. I’ve never seen someone so nonchalant about putting insects inside your eating hole. She was unfazed. So that eased my nerves a bit.

There were four different flavours to choose from: ‘Scurry Berry’, ‘Choc Hopper’, ‘Strawberries and Swirls’ and ‘Nutritious Neapolitan’

Another customer at the stall had just received the ‘Choc Hopper’ scoop and was telling me how he’s heard that grasshoppers reportedly have a ‘nutty’ taste and that’s why he chose that particular scoop. It seems that people have heard something about eating insects but, for the most part, no one actually does it.

The attendant gave me a peek inside the cart’s various ice cream tubs. 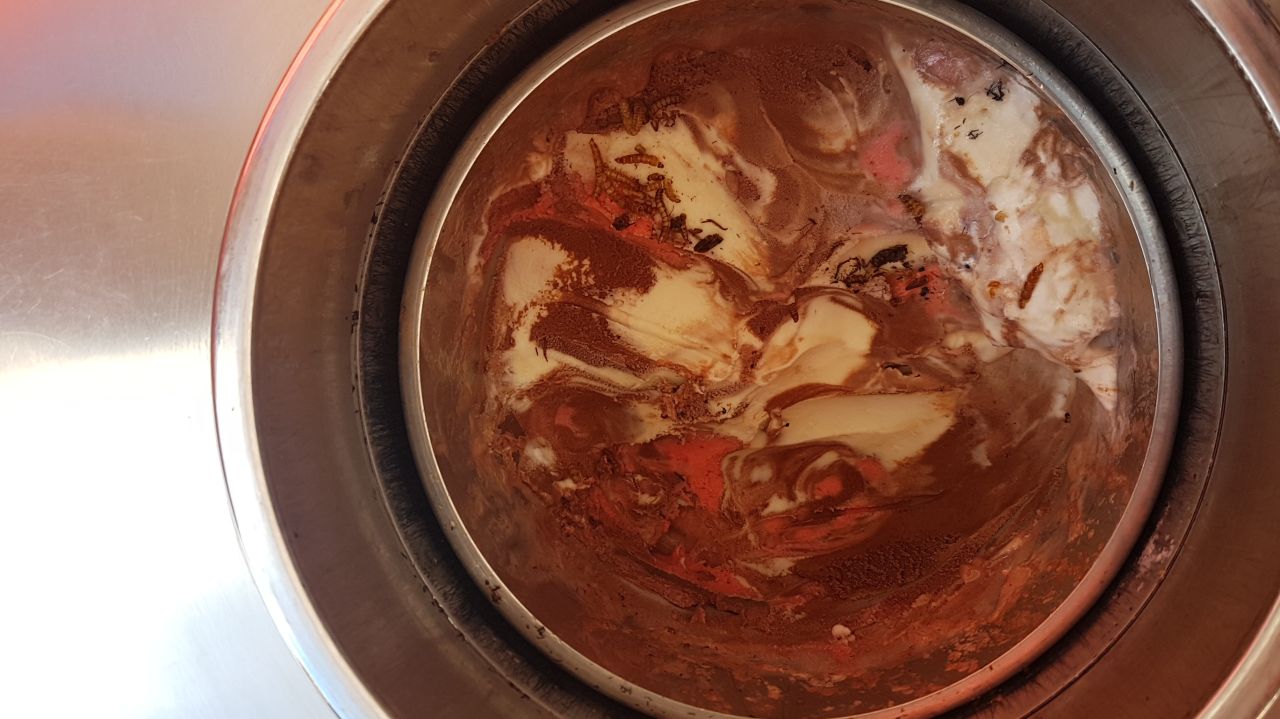 I decided on the ‘Nutritious Neapolitan’ because, I reasoned, if I am going to do this, I better do it for nutritional reasons. Duh. There also didn’t seem to be a lot of insects in there, so it was a good choice.

I let the ice-cream melt a substantial amount before I decided to give it a go. Watching it turn to goo had the mind-altering side effect of making me realise just how much (or how little) bits of bug were actually in the hell spawn concoction.

Not really that many. Still, I guess one insect is more than enough to prickle the hairs on my neck.

So, with a full water bottle at my side and dreams of a delicious lunch in my head, I loaded up a spoon. What’s the worst thing that could happen?

It could wriggle back to life and begin crawling around in your mouth
What if the insect isn’t clean and you catch an insect disease?
Have you ever seen The Fly or not, you imbecile!
What if, after eating the insects, you get a mealworm infestation… in your kidneys?!!!! 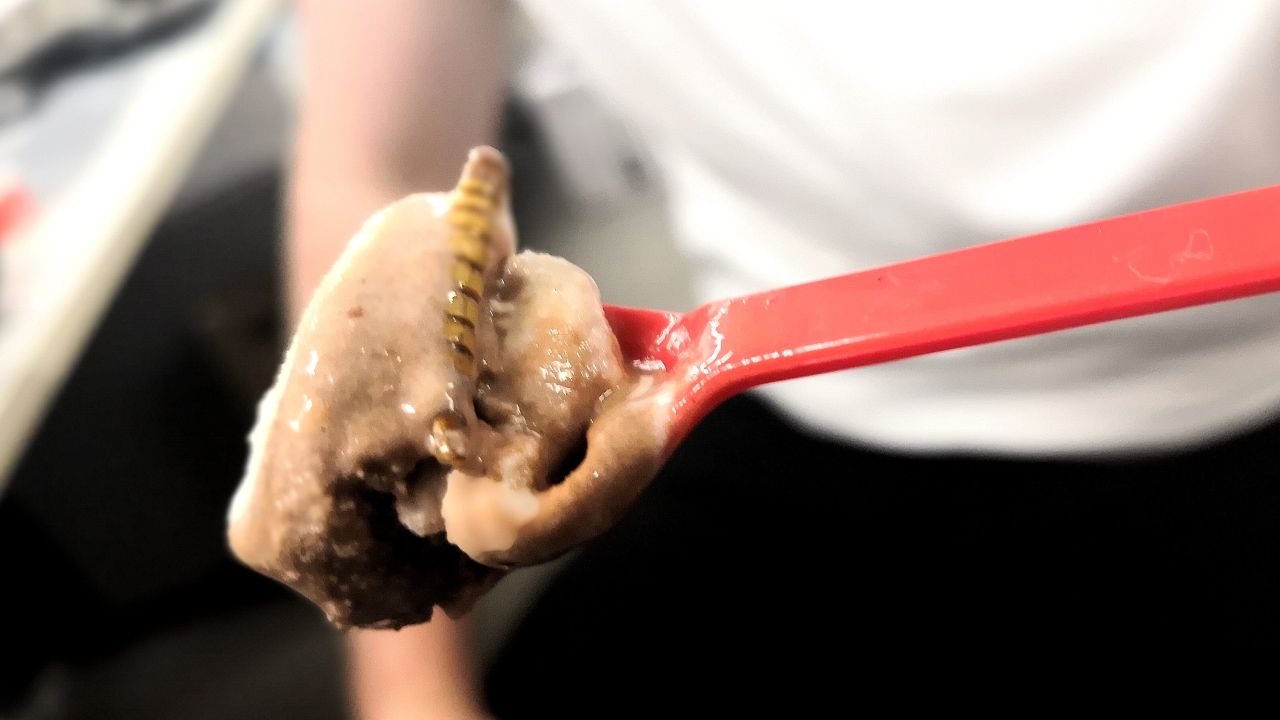 You know the thing parents do where the spoon becomes a plane because that excites kids? Well, I lifted the spoon in the same way. Except my plane was coming in an incredibly busy runway, making the wings shake and all the passengers sweat. My plane, potentially, was going to crash land just outside the runway.

But it made it and farm-safe insects ended up swishing around my gob with chocolate-vanilla-strawberry ice cream. The ice cream tasted like ice cream: Smooth, cold, sweet. The insects tasted like not much at all.

Truly, there was no real taste to them at all. It was like eating ice cream and every now and then crunching something foreign.

They did leave a horrible feeling in my mouth though, like tiny pieces of their bodies were lodged in my throat or teeth or stuck to the roof of my mouth. It was like there was grit all through my mouth. Specks of dirt I couldn’t clean. I wanted a toothbrush.

Afterward I ate some yoghurt with pistachios in it. I still haven’t been able to shake the feeling that there are insect bits caught in my teeth.

You can watch Chris eat some insects, without the aid of icecream, below: