Sydney Housing Is About To Get Cheaper

A house price ‘correction’ is coming in Sydney. Moody’s Investor Services is forecasting Sydney house prices will fall 4.2% in 2018, with the largest declines expected to be seen in inner-city regions. Here are the details.

After rising faster than any other Australian capital city in recent years, Sydney’s housing market is slowing.

According to data from CoreLogic, price in Australia’s largest and most expensive housing market have already fallen 1.7% this year, continuing the modest reversal that began in the final parts of 2017.

Moody’s Investor Services thinks there’ll be further declines to come, suggesting that Sydney prices will suffer a “correction” in the year ahead.

“Incomes in New South Wales have increased faster than the national average and underpin some of the recent gains in home values,” Moody’s says, pointing to the chart below. 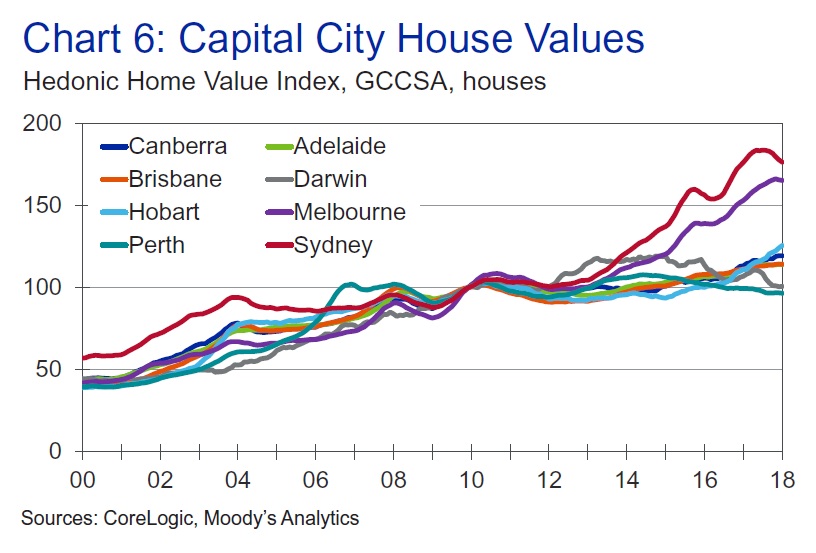 “However, housing values have risen even faster and are overvalued relative to equilibrium value. Therefore, Moody’s Analytics expects a correction across New South Wales.”

While, as a whole, the group expects prices to fall in Sydney, it says performances will vary depending on different types of dwelling as well as geographic location.

Combined, prices for houses and apartments in Sydney grew by around 80% from the start of 2013 through to late 2017.

Moody’s expects the largest declines will occur in regions close to the city centre.

“House values in the City and Inner South region are forecast to fall by 10.1% in 2018 to be the worst performing Statistical Areas in Sydney,” the group says.

Moody’s says house prices are also tipped to fall by more than the city-wide average in the Inner West, Ryde, North Sydney and Hornsby in the year ahead.

Only the Central Coast and southwestern suburbs, where housing costs are more affordable compared to other parts of the city, are expected to see positive price growth over the year. 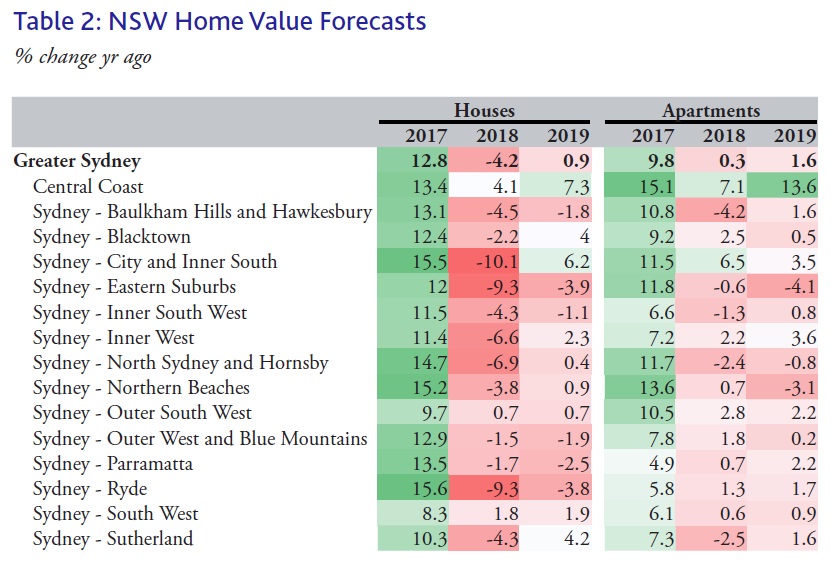 In contrast to the performance of house prices, Moody’s expects apartment prices to hold up better in the years ahead despite explosive growth in new supply.

“Apartments are expected to also slow but not as sharply with a 0.3% expansion expected in 2018, down from the 9.8% growth in 2017,” it says, adding that apartment prices are less volatile than those for houses from a historical perspective.

“Apartment prices in Sydney have not experienced the same degree of growth as houses in recent years, and so are not expected to correct as sharply over 2018.”

While Moody’s expects a housing-led correction to arrive this year, it doesn’t expect the weakness will last beyond the medium-term.

“By 2019, the correction is expected to have largely passed, with house and apartment values forecast to increase by 0.9% and 1.6%, respectively,” it says.