Omega-3s Aren’t So Great For Your Heart After All 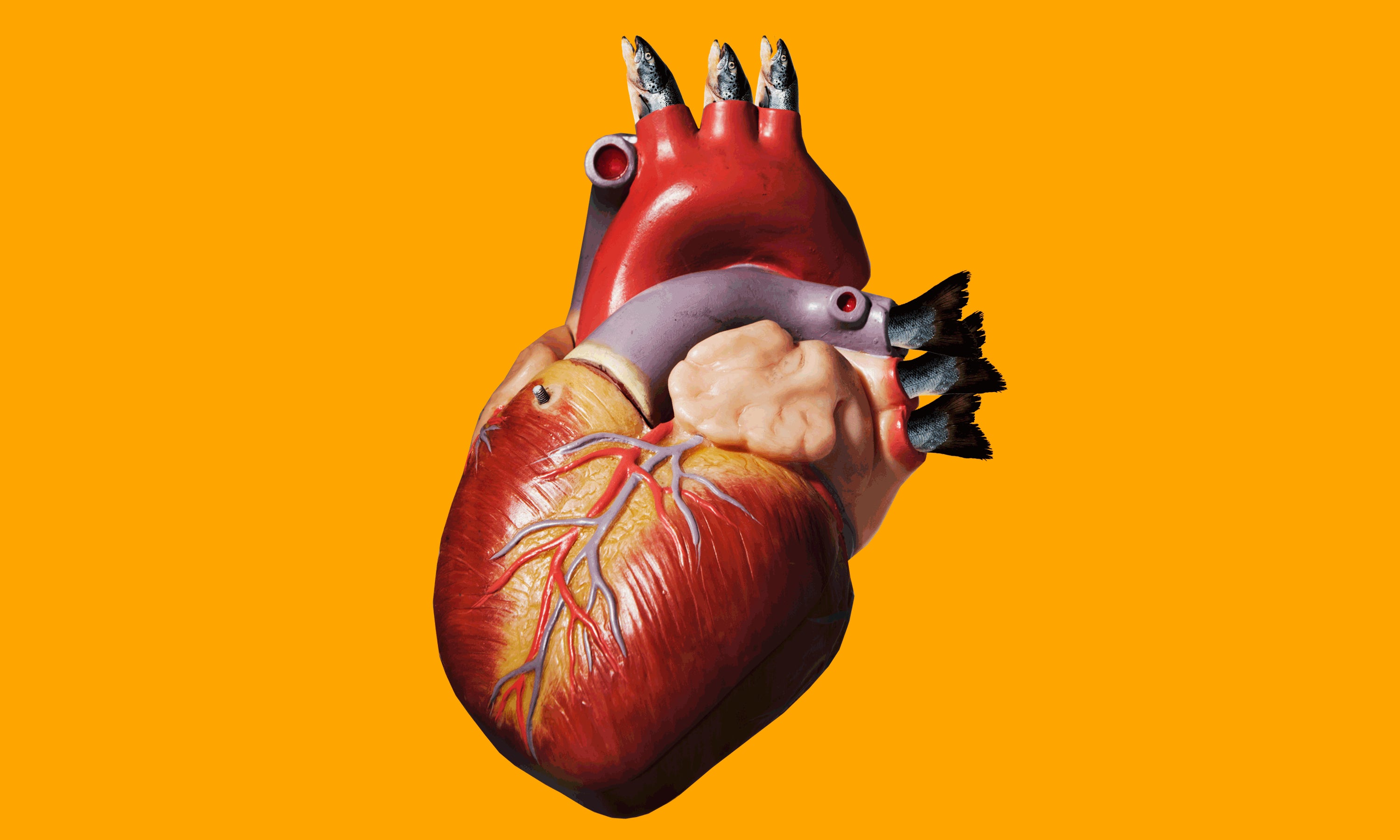 Omega-3s were supposed to protect us all from heart disease and other health problems, but it’s taken some time for the evidence to catch up with the hype around these supplements. Based on a large and important study published earlier this year in JAMA Cardiology, that evidence is here: fish oil or omega-3 supplements won’t help people with heart disease.

What about all the other reasons you might be taking omega-3s? Bad news: Major reviews have concluded that there’s little evidence that omega-3s are helpful for dementia, depression, inflammatory bowel disease, or age-related macular degeneration, all of which were at one point thought to be potential benefits of the supplements.

There’s also little evidence that taking omega-3s or DHA in pregnancy will make your baby smarter or prevent allergies.

Some studies show that taking omega-3s may lower the risk of breast cancer, but others show increased risk of prostate cancer. There are a few glimmers of hope; omega-3s may help reduce joint swelling and pain for people with rheumatoid arthritis and they may help some people with dry eyes, although more research is needed for these conditions.

Still more studies of omega-3s are underway, including the large VITAL clinical trial, which is testing omega-3 and vitamin D supplements in more than 25,000 healthy adults to see if they affect the incidence of cancer, heart disease and stroke.

Why There's So Much Confusion Over Nutrition And Health

If you believed the internet, you'd think there's huge debate over whether eggs, coffee or salt are good or bad for you. In reality, there's significant agreement on diet and health issues among experts, but the general public is conflicted.

Among US adults, 12 per cent reported taking fish oil supplements in 2012, up from just 1.3 per cent in 1999. A 2017 study found that 22 per cent of US adults older than 60 took omega-3s, making them the third most popular supplement in this age group, after multivitamins and vitamin D.

So why has everyone been telling us to take omega-3 or fish oil supplements all these years? That story begins with the Inuit people of Greenland — or rather, what European researchers observed of them.

In the 1970s, two Danish physicians, Hans Olaf Bang and Jorn Dyerberg, heard that Greenlanders had a very low prevalence of coronary heart disease. This type of cardiovascular disease is usually caused by cholesterol deposits narrowing the major arteries of the heart, which can eventually cause a heart attack if the arteries become blocked. Intrigued, Bang and Dyerberg set off to investigate the diet of the Inuit people of Greenland, to see if it held the secret to their health.

Supplement makers, who don’t usually wait around for large clinical trials before sending their products to market, started pumping out fish oil capsules.

What they found was that Greenlanders were eating pretty much the opposite of the low-fat diet recommended for cardiovascular health in the western world, yet they had lower levels of plasma triglycerides than Danish control subjects.

Their diet was low in fruits and vegetables and high in animal fat, mostly from seal and whale blubber. That fat was rich in omega-3 fatty acids, made by marine phytoplankton and passed up the food chain to the fish, seals and whales in the Inuit diet. Bang and Dyerberg zeroed in on these fats as the key to Inuit heart health.

How To Learn To Love Healthy Food

A common New Year goal is to start 'eating healthy'. That's easier said than done for those of us who don't enjoy the usual healthy foods or are simply picky eaters.

When we eat omega-3 fatty acids, they are incorporated into cell membranes and serve as precursors to eicosanoids, a diverse family of cell signalling molecules that do important things like regulate inflammation, blood clotting, and blood pressure. Studies in rodents and petri dishes and short-term human studies showed that omega-3s helped prevent irregular heart rhythms and blood clots, reduced inflammation, and lowered blood triglycerides.

Researchers around the world set to work testing the link between omega-3s and heart disease, as well as other health conditions. And supplement makers, who don’t usually wait around for large clinical trials before sending their products to market, started pumping out fish oil capsules, happy to bring the benefits of eating fish to the masses.

But a closer look at the origin of the fish oil story shows that more scepticism was warranted from the very beginning. According to a 2014 paper published in the Canadian Journal of Cardiology, Bang and Dyerberg’s hypothesis was built on thin ice. For one thing, they never actually measured the incidence of heart disease in Greenland, instead relying on sketchy local estimates, which were unreliable since many people lived too far from medical facilities to have their diseases or causes of death accurately diagnosed.

Subsequent studies found that rates of cardiovascular disease in Inuit populations are just as high, if not higher than in western populations, despite their high intake of omega-3 fatty acids.

Plus, the Greenlanders seem to have evolved genetic differences that allow them to process their unique diet. A 2015 paper published in the journal Science identified gene variants common in Inuits (and rare in Europeans) that help them metabolise their fatty diet and keep blood omega-3 levels in balance with other fats in the body.

Without that genetic background, someone of European ancestry eating an Inuit diet might end up with much higher blood cholesterol and omega-3 levels.

How Much Does Genetics Really Affect Your Fitness?

If you're not seeing results in the gym, there are a lot of things you can tweak: your diet, your exercise schedule and the types of workouts you do, to name a few. But genetics is also a big factor.

Fish is still good for us, though. Observational studies, which estimate how much fish people eat and their incidence of heart disease, consistently find that eating fish at least once per week is associated with a lower risk of dying of coronary heart disease.

Subsequent studies found that rates of cardiovascular disease in Inuit populations are just as high, if not higher than in western populations, despite their high intake of omega-3 fatty acids.

But these studies can only show correlations, not a direct causal link between eating fish and better heart health, and they can’t tell us if omega-3 capsules have the same effect as fish in the diet. Maybe fish are good for us because they contain not just omega-3s but also other nutrients, like vitamin D, iodine, selenium, and protein. If you’re eating a salmon fillet instead of a steak, you’re also consuming many more polyunsaturated and fewer saturated fats.

The Truth Comes Out

To find out if omega-3 supplements really make our hearts healthier, we needed clinical trials. Many such studies have been done over the last few decades, and the best of these were summarised in the recent JAMA Cardiology study. A meta-analysis, the study pooled the results of 10 randomised trials, altogether involving nearly 78,000 people at high risk for cardiovascular disease.

Some of the participants took omega-3 supplements and some did not. On average, the trials tracked people for about four and a half years and together recorded 6273 cardiovascular events, including heart attacks, strokes, and procedures like coronary bypasses and angioplasties. A few of the 10 trials had found benefits of omega-3s, but when all were combined, that larger pool of data showed no decrease in cardiovascular events in people who took the supplements.

Another large study published by the Agency for Healthcare Research and Quality at the U.S. Department of Health and Human Services in 2016 came to the same conclusion.

The Bottom Line: Take Fish Oil If You Really Want, But Don’t Expect Much

The American Heart Association says that despite the mixed evidence, it’s still reasonable to take an omega-3 supplement if you’ve had a recent coronary heart disease event, like a heart attack, or if you have heart failure, but there’s no evidence that they should be used in the general population.

There’s also little risk (beyond the cost) of taking omega-3s in the doses commonly used, usually containing about one gram of fish oil.

The authors of the recent study also point out that early research on fish oil and heart disease did show a benefit, and the disappointing results of more recent studies could be because of changes in diet and medicine over time. For example, maybe omega-3 supplements only benefit heart health if you’re truly deficient in omega-3s, and as early studies were covered in the media, more people started eating fish so that a supplement didn’t add any further benefit.

Or maybe, as we’ve gotten better at managing heart disease through the use of medications, like statins, any benefit of omega-3s is no longer apparent.

Maybe fish are good for us because they contain not just omega-3s but also other nutrients, like vitamin D, iodine, selenium, and protein.

It’s been more than 40 years since Bang and Dyerberg visited Greenland and published their theory about fish oil and omega-3s, and there are a lot of lessons to be learned from their story.

First, it’s easy to be led astray by the assumption that a correlation between two variables is the same as a cause and effect relationship. Nutrition (and life in general) is almost always more complicated than that. Second, science is an ongoing process, and it can take decades and many, many studies to answer a simple question.

Third, supplements are almost always overhyped, while the evidence for eating a varied diet — including fish — only seems to grow.

Alice Callahan is a health and science writer based in Eugene, Oregon. She has a PhD in nutrition and is the author of The Science of Mom: A Research-Based Guide to Your Baby's First Year.