If Your Discover Weekly Playlist Sucks, Try This

Your Discover Weekly probably doesn’t suck – the feature is so popular that it’s the subject of long glowing profiles on tech blogs and business blogs. Spotify even built an ad campaign out of users tweeting how much they love the feature. Each week, every active Spotify user gets a new list of 30 tracks, and over half of them find a new favourite. But depending on your Spotify habits, it is possible to get a garbage Discover Weekly. Here’s what’s happening and how to fix it.

Spotify uses several methods to make your customised playlist; it analyses how songs are described on music blogs, and even compares their actual digital audio content. But the main way Spotify determines if a song should appear on your Discover Weekly playlist is by comparing your listening habits to those of other users. So if you listen to a lot of R.E.M., and Spotify knows that R.E.M. fans also like Dinosaur Jr, it will put some Dinosaur Jr on your Discover Weekly.

If you skip a song before it hits the 30-second mark, Spotify registers that as disliking the song, and doesn’t give you similar tracks in your Discover Weekly. So if you keep a massive “favourite songs” playlist but you end up skipping a lot of tracks, you might be telling Spotify that you hate the songs you actually like.

Play new music for a while

This one takes an actual change of listening habits. If you suddenly discover a whole different genre, Spotify won’t go full bore on recommending similar music, because it thinks someone else might be borrowing your account or using the same computer. Keep playing that music more than a day or two.

Put your favourite music in playlists

Spotify interprets your adding a song to a playlist to mean that you like it. So if you fill your playlists with music you don’t really like – like a constantly rotating “music to try out” playlist – you might send the wrong signal. It’s a weaker signal than actually playing music, but if you make heavy use of playlists for blind or “ironic” listens, consider just using your library instead.

Spotify figures that it’s easy enough to find new kids’ music, ambient sound effect tracks or Christmas music, so unless you play those genres constantly, it ignores them when recommending new music. Same with private sessions, and playing Discover Weekly itself.

If your Discover Weekly is still bad (or if you’re waiting for next week’s playlist), make some playlists of what you’d actually like to hear more of. Spotify will recommend similar tracks at the bottom. These recommendations pull from other people’s playlists, so if you make a themed playlist, the algorithm will catch on. For instance, here’s what Spotify recommends based on my collection of 74 cover songs: 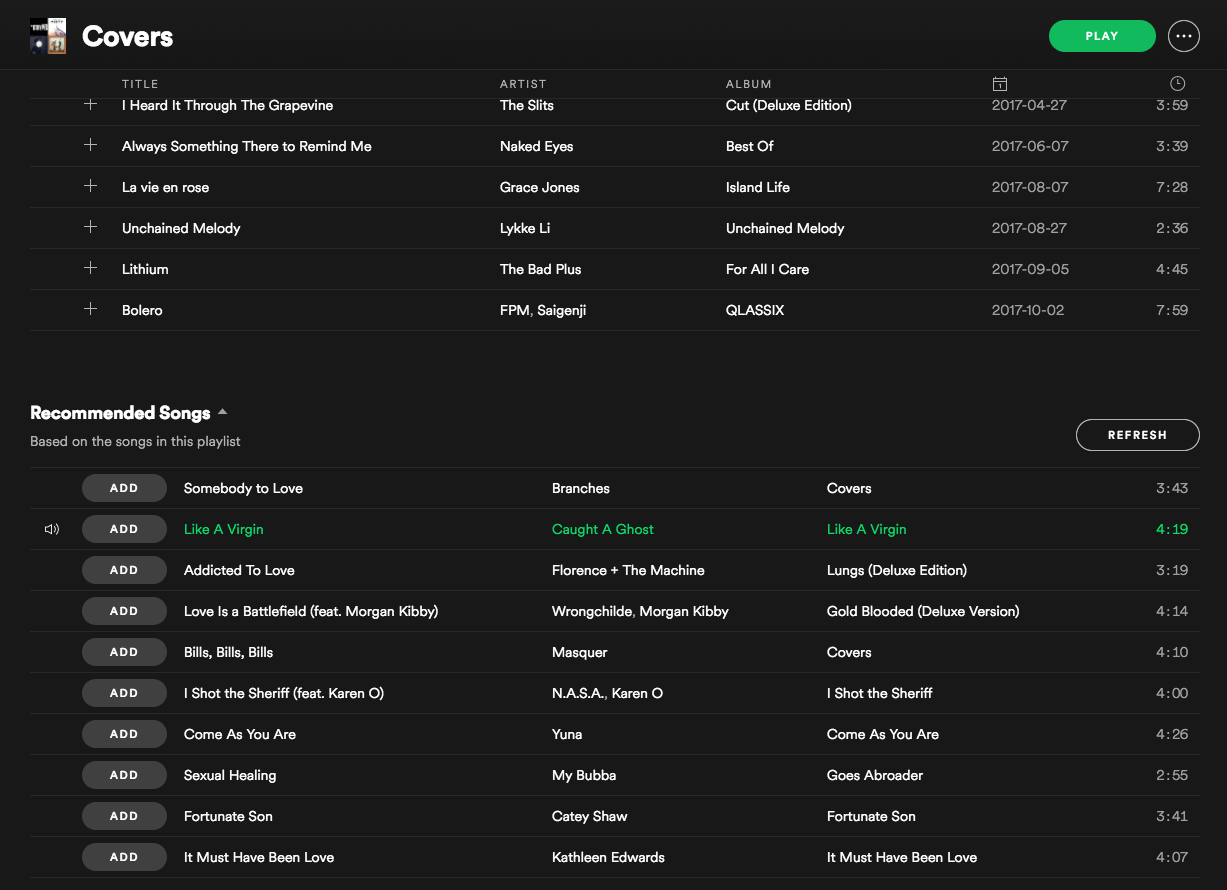 That’s 10 fresh cross-genre covers of hits from the ’70s to the ’90s. Some (such as Caught a Ghost’s “Like a Virgin”) are good, some are clichéd, but they’re exactly the kind of music I wanted to try out.

None of these methods are foolproof; Spotify doesn’t reveal all the ingredients of its recommendation algorithm, since it’s one of the service’s biggest advantages over competitors such as Apple Music. And of course the algorithm evolves, like every other part of the service. So pay attention to the signals you’re sending, and how you might change your music “workflow” to get better recommendations.