Winter Is Set to Be Cold and Rainy and I Guess...

How To Solve A Rubik’s Cube In Five Seconds

The maximum number of face turns needed to solve the classic Rubik’s cube is 20, and the maximum number of quarter turns is 26. It took 30 years to discover these numbers, which were finally proved by Tomas Rokicki and Morley Davidson using a mixture of mathematics and computer calculation. (The puzzle does have 43 quintillion possible configurations after all.)

So how did the current world-record holder SeungBeom Cho manage to solve Rubik’s cube in under five seconds? (4.59 seconds to be exact.)

You could read instructions, but that rather spoils the fun. If you want to work out how to do it yourself, you need to develop cube-solving tools. In this sense, a tool is a short sequence of turns which results in only a few of the individual squares on the cube’s faces changing position. When you have discovered and memorised enough tools, you can execute them one after the other in order as required to return the cube to its pristine, solved condition.

These tools require experimentation to discover. Here’s how I did it myself: go on holiday with a Rubik’s cube and a screwdriver. Do experiments to find tools. The trouble is that most experiments just scramble the cube horribly and you forget what you did so you cannot undo your moves.

Now you have a choice, either buy another Rubik’s cube, or take out your trusty screwdriver. Turn one face through 45 degrees, and place the screwdriver under a central piece of the rotated face. Using the screwdriver as a lever to gently prise it out, it’s then easy to take the cube apart completely and reassemble it in pristine form.

The final move of reassembly will be the reverse of the screwdriver trick: rotate one face 45 degrees and apply gentle pressure to put the final piece back in place. 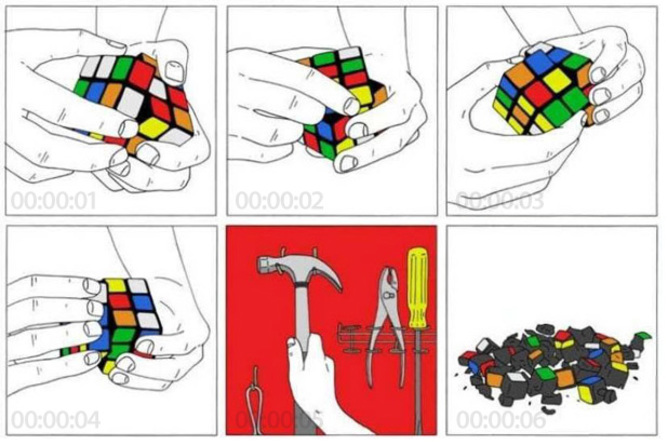 Sequences of moves of a cube form something that mathematicians call a group. If A is a sequence of moves, then let A-1 (that’s “A inverse”) be the same sequence of moves performed in reverse. So if you perform A and then A-1, the cube will be in the same state as was it when you began. The same is true if you first perform A-1 followed by A.

Now suppose that B is another sequence of moves. Many tools have the form of what mathematicians call a commutator: do A, then B, then A-1 and finally B-1. If A and B commute, so that performing A then B is the same as doing B then A, then the commutator does nothing. From a mathematical point of view, a commutator measures failure to commute, and is a key notion in group theory. When I had a Rubik’s cube in one hand, and a screwdriver in the other, it was natural to look at how commutators behave.

Think of the overall structure of the different configurations of a Rubik’s cube as a labyrinth, which has that many chambers, each of which contains a Rubik’s cube in the state which corresponds to that chamber. From each chamber there are 12 doors leading to other chambers, each door corresponding to a quarter turn of one of the six faces of a cube. The type of turn needed to pass through each door is written above it, so you know which door is which. Your job is to navigate your way from a particular chamber to the one where the cube on the table is in perfect condition.

The tools that you have discovered are ways of getting nearer to the goal. So you don’t need to plan your route in advance, you just execute the rotations of each tool so that you get steadily closer to and finally reach the winning chamber. The mathematical result in Rokicki and Davidson’s paper shows that, no matter where you are in the labyrinth, it’s possible to reach the winning chamber by passing through at most 26 doors – although the route you find using your tools is not likely to be that efficient.

How to put this to use to solve the cube in five seconds? Someone like young Lucas Etta who is interested in speed solutions will not only have memorised a large number of tools, they’ll also have practised them until they can perform it very quickly. This is mostly a matter of dexterity and practice, but it’s also important to have a high-quality cube that can be manipulated smoothly and with great precision.

Others, rather than going for speed, develop the skill of solving Rubik’s cube while blindfolded or with the cube held behind their back. In the competitive version of this variation, the solver is given a limited amount of time to study the scrambled cube and plan their solution, before they have to carry out their solution from memory without looking at the cube again.

In terms of our metaphor of a labyrinth, this corresponds to all the Rubik’s cubes in all the chambers being removed, except for the one on which you start. You can’t take that cube with you, but you can study it carefully and plan your whole route to the winning chamber in advance. Quite a feat of memory, and not for those with just a passing interest in the cube.