Here’s How Much Money You Need To Be Happy

How much money do you need to be happy? Some people believe the best things in life are free; others are happiest when they’re striking multi-million deals in the back of their chauffeured town car.

There’s no right answer, per se; naturally, how much money you need to be happy will depend on you, your circumstances and your environment. (And of course, questioning what exactly happiness is opens up a whole other can of existential dread.) You’re unlikely to be happy if you can’t afford life’s necessities — food, clean water, shelter, health care — but are all millionaires happier than the rest of us? Of course not.

It’s not all about money.

So it’s an impossible question to answer, not that that’s stopped economists from trying to figure it out. In the past, studies have pegged the “perfect salary for happiness” at $US75,000 ($97,200) per year in the US You get measurably happier as you earn more up to that mark and then after that your day-to-day happiness plateaus (researchers did note that that doesn’t mean there’s absolutely no difference; “more money does boost people’s life assessment”).

New research out of Purdue University complicates and updates that view. The study, published in Nature Human Behaviour, asserts that individuals have different optimal income levels for “life evaluation” (the “overall assessment of how one is doing and is likely more influenced by higher goals and comparisons to others”) and “emotional well-being” (“one’s day-to-day emotions, such as feeling happy, excited, or sad and angry”), which are different around the world.

The researchers found that the ideal income point for an individual globally is $US95,000 ($123,120) for life evaluation and $US60,000 ($77,760) to $US75,000 ($97,200) for emotional well-being. After that, further increases in income could actually be associated with a decrease in life satisfaction and well-being. The authors note that the satiation points are estimates that apply only to single-person households — so they are likely to be much higher for families.

The research is based on data from the Gallup World Poll, which surveys more than 1.7 million individuals from 164 countries. As you can imagine, it varies by region, with higher incomes mattering more in wealthier areas like Western Europe and North America. 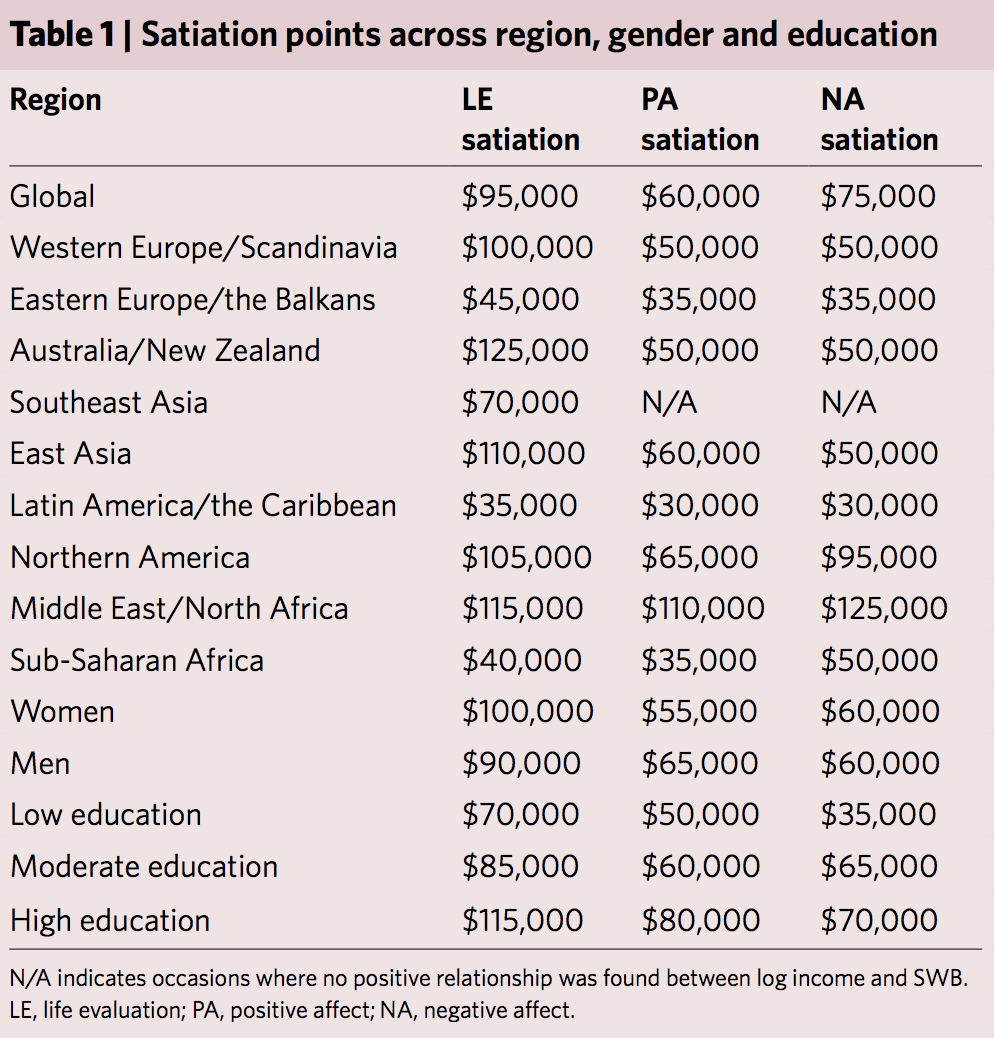 The authors of the study write in the Nature Human Behaviour that the estimates likely vary even within individual countries, especially if there are extremely different costs of living in different areas.

So what’s the takeaway? Well, it’s true that you need a certain level of income to be happy, but happiness depends on much more than just income — where you live plays a factor, and your emotional well-being is a different measure than your overall life satisfaction.

Most importantly, spending money on material possessions or a nicer house just isn’t going to make you happier. Instead, Andrew Jebb, the lead author of the study, told Mic that if you want to be happier, you should focus less on yourself. “People tend to be better off when they spend their money… in service of other people,” he said.