Can A Video Game Teach Your Kid To Play An Instrument?

I learned how to play the piano the old-fashioned way — by being dragged by my mother to weekly lessons taught by an elderly woman in the neighbourhood, and yawning at the sheet music as my kid-fingers played a clunky rendition of Für Elise. Since then, music instruction has evolved. There has been a crop of video game apps that introduce children to instruments such as the piano, guitar, drums and ukulele and through fun challenges, get them to practice — willingly.

Just connect your iPad or other device to your instrument, and watch them play. Writes one reviewer of an app called Piano Maestro: “My kids literally fight over who gets to practice the piano next.” Says a fan of the the Yousician app: “I have to tell my child, ‘OK, you have to stop now.'” As a parent, how can you not appreciate this sorcery?

But professional musicians are divided on using video games to teach kids how to play an instrument. While a game might get little Lenny to memorise “A Whole New World”, can it help him develop real musical skills that will last? It’s a tricky topic — every child is different, every game is different, and every family has different musical goals.

That said, here are some pros and cons: 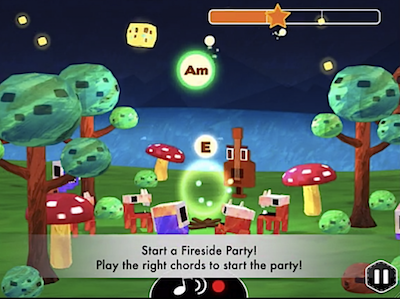 Video games can give kids an entry point to music. “Starting with music theory basics or sheet music is usually a hard sell,” says Adam Cole, a pianist, conductor and the co-director of Grant Park Academy of the Arts. “There is a significant learning curve, especially regarding reading music, around the use of the eyes — they don’t move the same way when reading music as they do for words — and their coordination with the hands, that can easily send a beginner running away at top speed.”

A game, Cole says, might pique a child’s interest in music and then perhaps eventually pursue formal instruction. And if games are something that motivates a student, the teacher can know to use games and play in their instruction.

On Slate’s parenting podcast Mum and Dad are Fighting, c0-host Rebecca Lavoie has talked about how playing The Beatles: Rock Band for hours on end was what prompted her teen son to take up the real drums. He now plays competitively.

They’re affordable and convenient. Music lessons can be a major investment, and there are no guarantees that your kid will want to stick with them. A game can be a low-pressure way to learn.

Your kid might become a one-trick pony. It is the nature of these instrument-teaching games to nudge amateurs into feeling pretty awesome about their progress. Your kid can learn how to play “Hallelujah” by Leonard Cohen on the piano, and impress relatives at the next family gathering. (The description for the piano game Synthesia declares: “Start playing immediately, even if you can’t read sheet music.”)

But jumping into songs before learning “functional skills” — music theory, sight reading and playing by ear — might hinder young musicians. Ethan Whitlow, a freelance musician in College Station, Texas, says that when you learn something essentially by rote, you’re not developing real musical skills. Many teenagers, he says, will “glue themselves to the piano for hours to learn one impressive song so they can look cool.” This, he believes, is “developmentally terrible.”

As kids rip open their birthday or holiday gifts with cake-fuelled glee, parents brace themselves for the aftermath. A house cluttered with toys that no one will express interest in until 2.7 seconds after they make their way into the donation pile. The cycle is real.

“Think of it like learning a poem in a foreign language by memorising a series of phonetic sounds without bothering to learn how to read the words, or to learn what any of the words mean,” Whitlow says. “Now imagine doing that for years, learning poem after poem that way. You could’ve just learned to speak and read the language in that time, but you cared more about reciting foreign poems by brute force phonetic memorisation for an end product. You can’t visit that country and have a conversation with people. In the end, as your memory of those poems slip, you’re left with nothing. You’ve learned no functional skills in that language.”

Your child can develop poor physical habits. Instrument-teaching games and apps are becoming smarter. Some can listen to you kid’s performance and give him feedback on how to improve. But what they cannot do is watch your kid play. Good music teachers will make sure a student is not developing bad physical habits — they will check her posture, wrist position and foot elevation, and correct any issues along the way.

Also, games involving instruments that are essentially toys, like Guitar Hero and Rock Band, can hurt your hands and wrists with prolonged playing (or sometimes even after the first song). Jamie Eads, a professional drummer in Georgetown, Kentucky, says the drums especially can do harm to young percussionists. “When you whack a piece of hard plastic, it can really hurt your hand,” he says. “It’s not like a practice pad. There’s no give. It can do some very serious damage.”

Without the screen, kids might lose interest. “What happens when the screen goes away?” Eads asks. Video games are designed to raise the level of dopamine in players’ brains. Playing an instrument outside of the game probably won’t give a kid that instant gratification — there are no flashing stars, no points, no accompanying music, no cheering squad. Says Eads, “They might feel dejected and quit because their attention span just isn’t there.”

Any entry point to music can be a good one, and games are giving people new access to instruction. But it’s easy to get stuck in a rut. If you want your kid to learn how to play their favourite songs and be done with it, a game might be what you’re looking for.

But if you want your child to develop functional music skills that will serve him throughout his entire life, for that, you’ll need a real-life teacher.