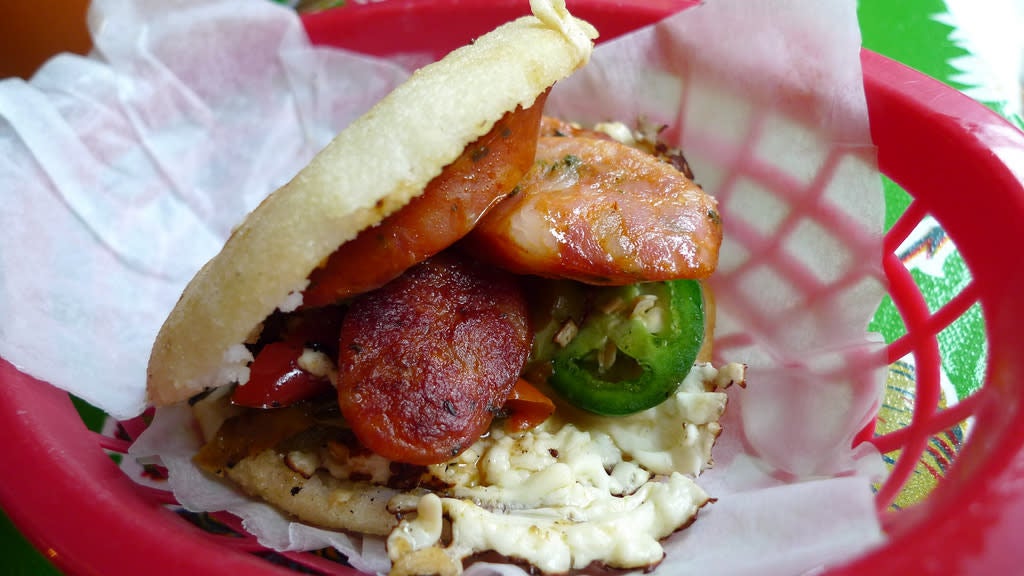 Arepas, those golden brown discs made of corn masa (dough) that usually get stuffed or topped, are the "daily bread" for a lot of Latin Americans (especially if you hail from my home country of Colombia or neighbouring Venezuela). Although not technically a bread, they can be consumed at any time of the day, much like the leavened stuff. They're served up plain alongside a steaming bowl of frijoles (beans), buttered for breakfast and topped with a fried or scrambled egg, or stuffed with all sorts of goodies such as chicken salad or marinated strips of grilled steak. The options are endless.

When I was a kid, my dad engineered an arepa "grill" of sorts that he made from a round piece of metal held together with two screws, with thinner metal grill pieces on top - so the arepa would sit neatly - and a long handle for removing it from the stove. This contraption sat atop our electric stove element. And wouldn't you know it, the darned thing worked.

This seemed like a lot of effort to me, and my mum kept the arepa maker when I moved out. If you, like me, lack said grill (or the gumption to make one), you can bake arepas, use a panini press if you're feeling fancy, or you can take my favourite short-cut and use a trusty, hot, cast-iron frying pan to cook up these golden discs. Simply make the arepa dough (see below) and shape them into any size you want. (I like them about the size of a small English muffin.) Heat up some oil (like avocado oil), and grill until bronzed and beautiful. 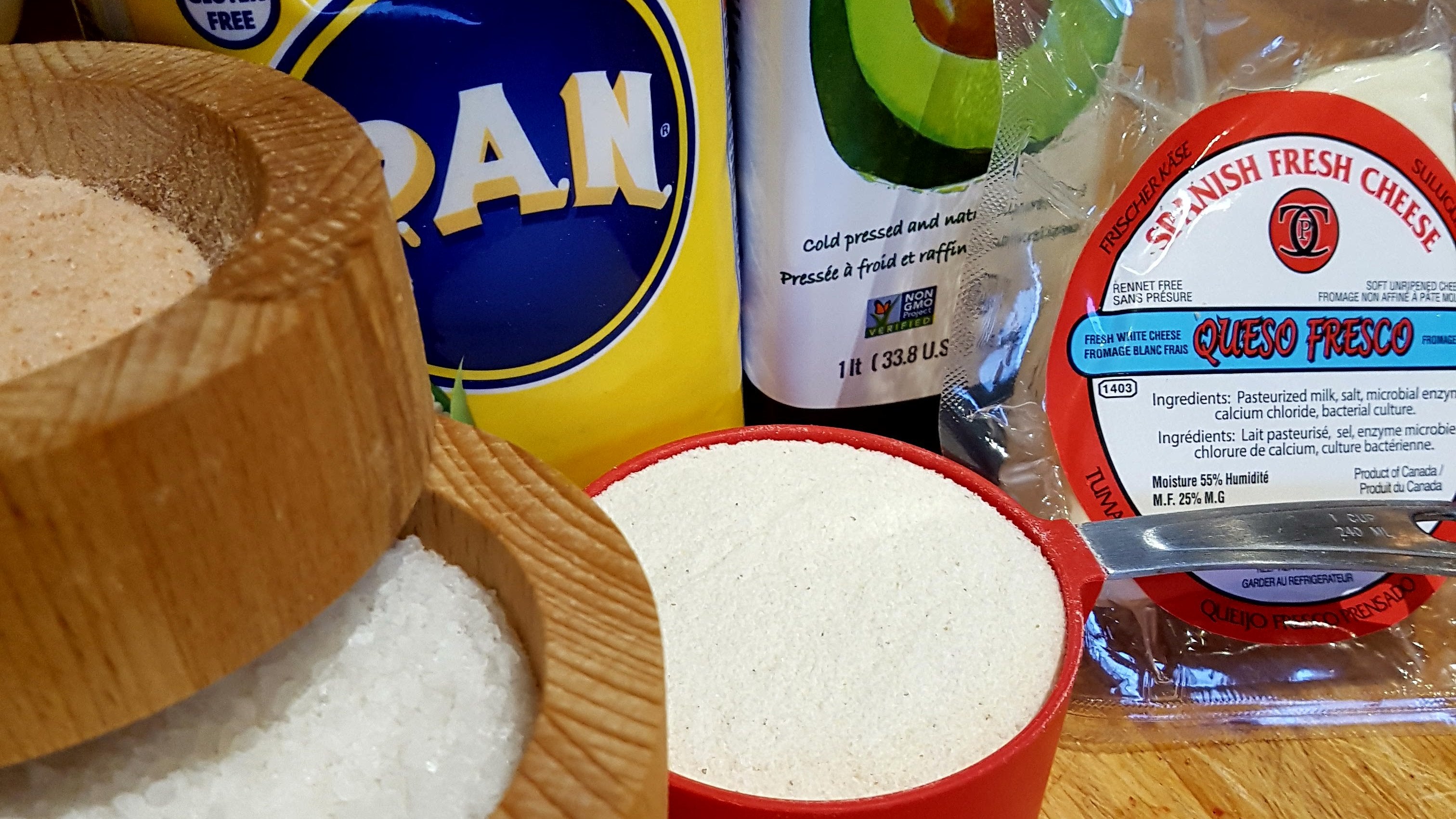 Arepa ingredients at the ready. Photo by Mary Luz Mejia.

Preparing these any time snacks is dead easy. You'll need one cup of arepa harina (such as Harina Pan), found in any Latin grocery store, a pinch of salt, a drizzle of oil, and one cup of warm water to get this party started. Mix and let the masa sit for a few minutes so that all of the corn flour rehydrates. Your dough should be smooth and supple. Pinch off a small piece, roll it into a ball, and then flatten to a disc approximately half a centimetre thick. If the arepa's edges crack, you'll need to add a little more water. Add about a teaspoon at a time until you get soft, hydrated dough.

Add a swirl of avocado or vegetable oil to a hot skillet, then place the discs onto the pan, making sure they aren't crowded. Don't move or mess about with these babies until they start to colour and get a "crust". Then flip and cook on the other side. You'll know each side is cooked when, much like a steak, they loosen their "grip" on the pan's surface. If you don't wait, you'll leave that glorious crust on the pan instead of in your belly! 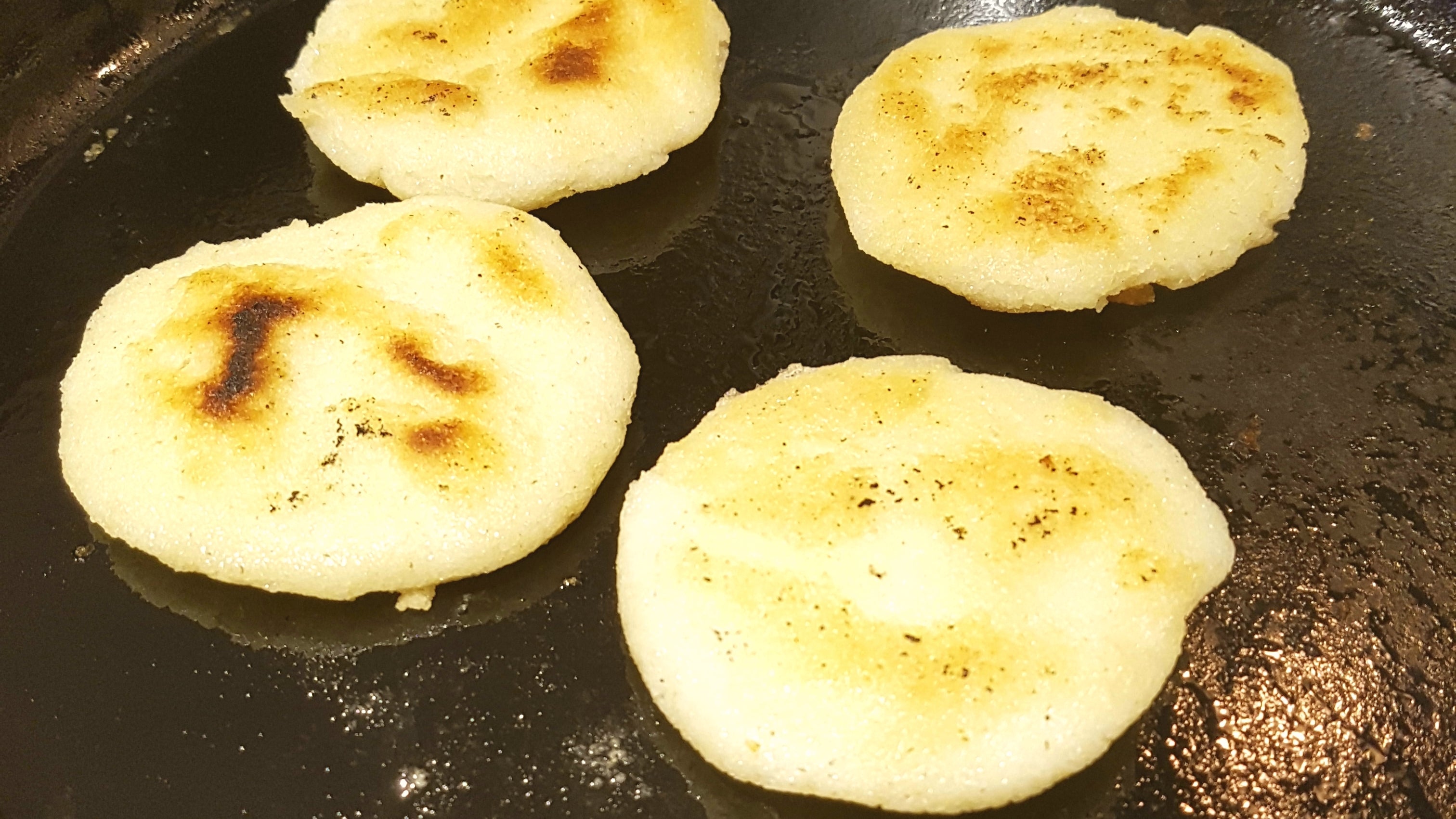 Now here's the fun part. Whether you're working on a hangover helper; going for a late-night, post-party arepa; or simply serving up the snack at your next get-together, topping or filling these beauties is an "anything goes" proposition. Have leftover guacamole? How about some store-bought roasted chicken? Shred that chicken up and either toss with the guacamole and a squeeze of lime or use the guac as a base and top with the chicken. Garnish with some corriander and, guaranteed, you'll have a happy mouthful. Leftover black bean soup? Grilled steak? Just about anything your heart desires pretty much works. Yep, even ham and cheese. 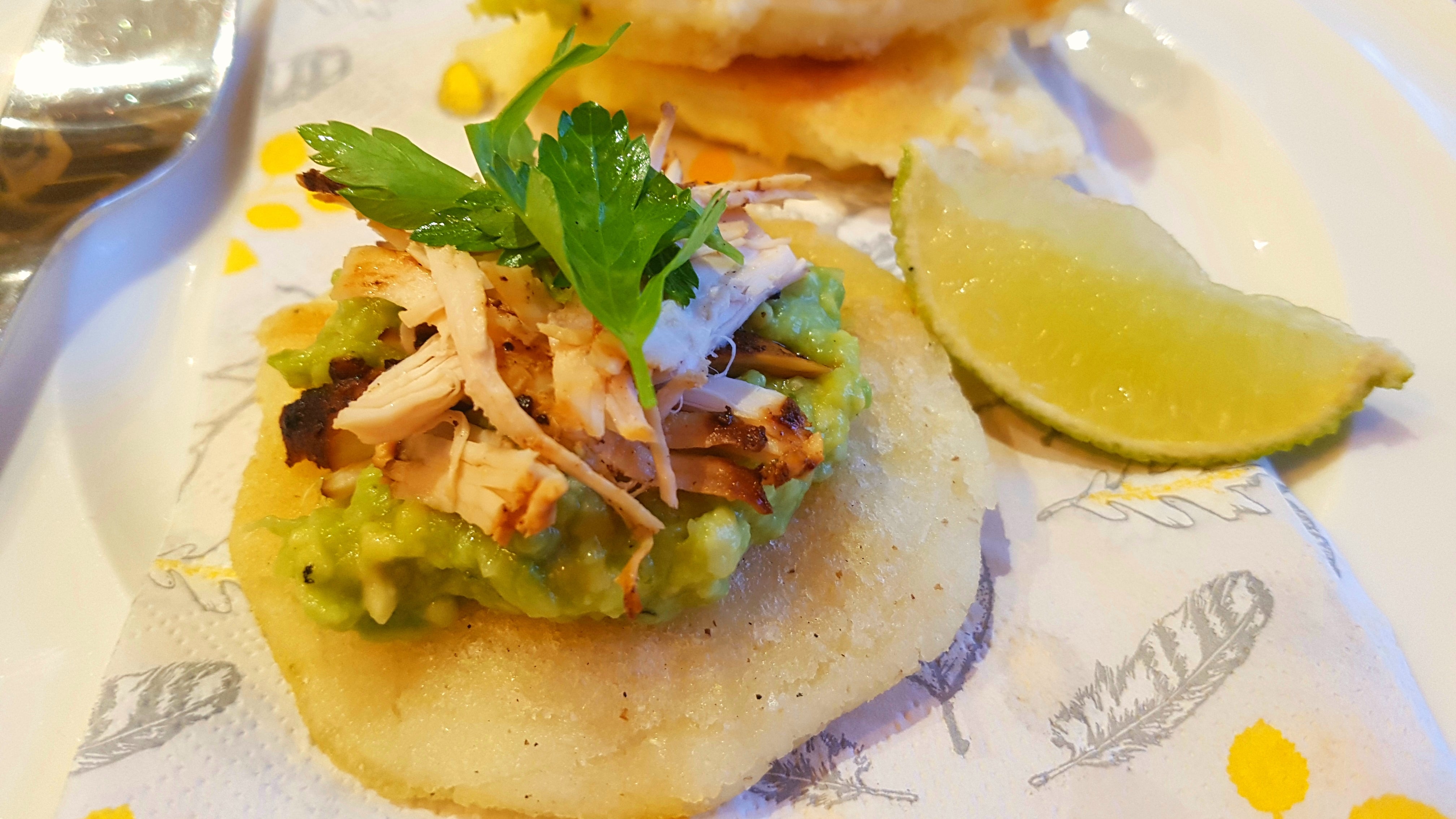 The any time snack or meal - the arepa. Photo by Mary Luz Mejia.

If you're feeling creative, you can take some of your favourite melting cheese and sandwich it between your uncooked masa before cooking. It's like the Latin American "grilled cheese" you didn't know you needed in your life.