How To Get Into Speed Skating 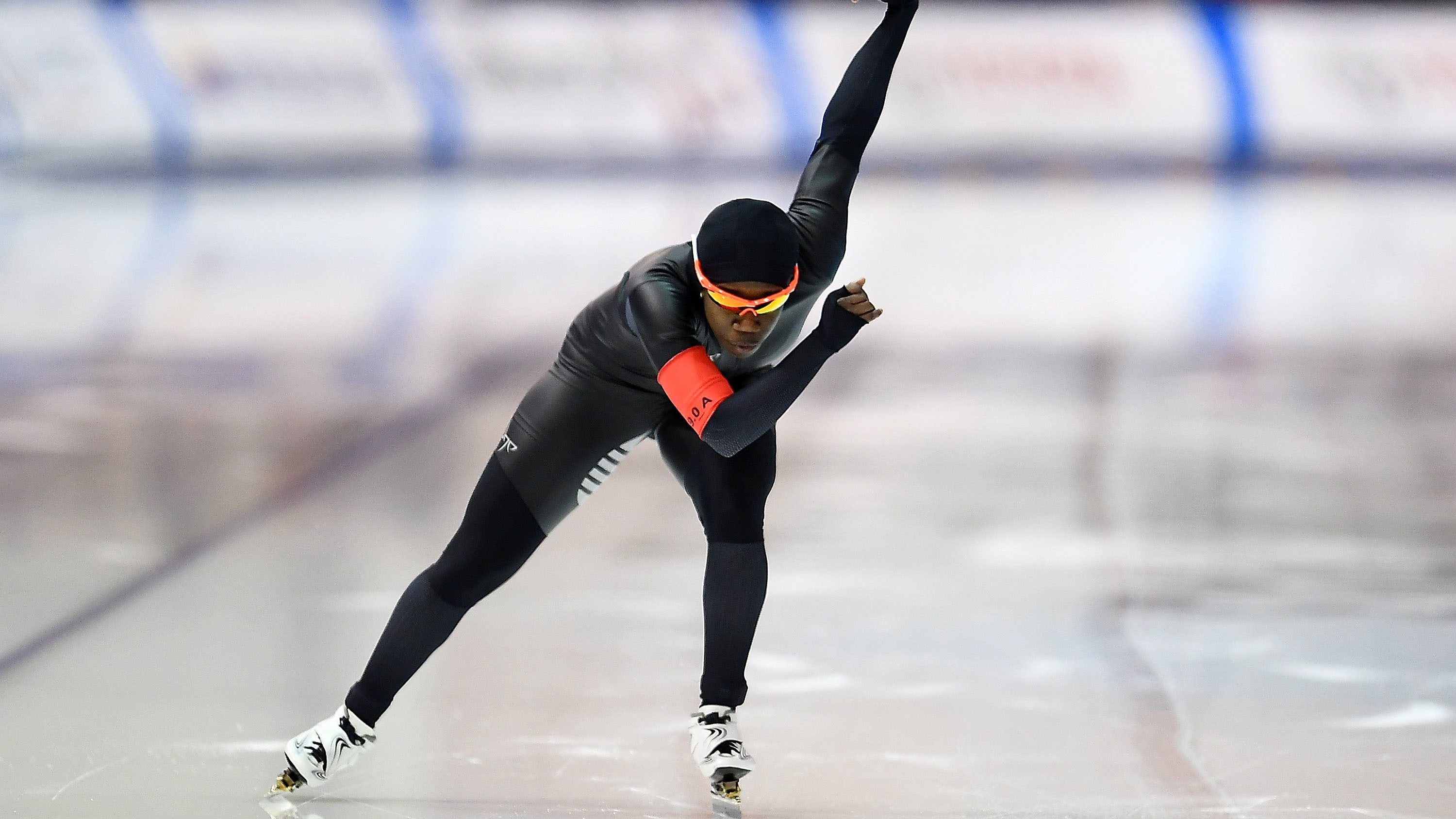 If speeding down a long lane of ice seems like your thing, or hugging tight corners while trying to get ahead of whoever is leading the pack, maybe you should consider lacing up a pair of speed skates. You don't have to have Olympic-size thighs to try it out, although that would certainly help. I stopped by a practice to get the lowdown.

Erin Jackson was an inline speed skater and roller derby player, and now she's skating in the Olympics on ice. Photo by Stacy Revere/Getty Images.

Olympic speed skating comes in two flavours: Long and short track. The long track events are timed, and typically two skaters compete at a time, in separate lanes. Whoever posts the fastest time wins. Just to keep things interesting, there is also a team pursuit event, where groups of three skate the distance together.

Short track is a different story: Several skaters line up next to each other, and jockey for position. The winner is determined by placement, so it doesn't matter how fast you go as long as you're the first one across the line. (Long track will include a similar style event this year, called a mass start event.)

If you're hoping to get into traditional long track speed skating, it may be difficult to find a full size rink with a 400m track to accommodate you. However, Australia's first female speed skater at the Winter Olympics started on rollerblades before switching to ice, and US Speedskating has been poaching skaters who race on roads in rollerblades, since there are no Olympic events for roller skating. So if you have your heart set on skating long straightaways with your arms swinging, the easiest path into the sport may be inline speed skating.

Short track is simpler, though: The regulation track fits easily inside a hockey rink. So if you go looking for a speed skating club, it may be easier to find people training for, and competing in, short track. 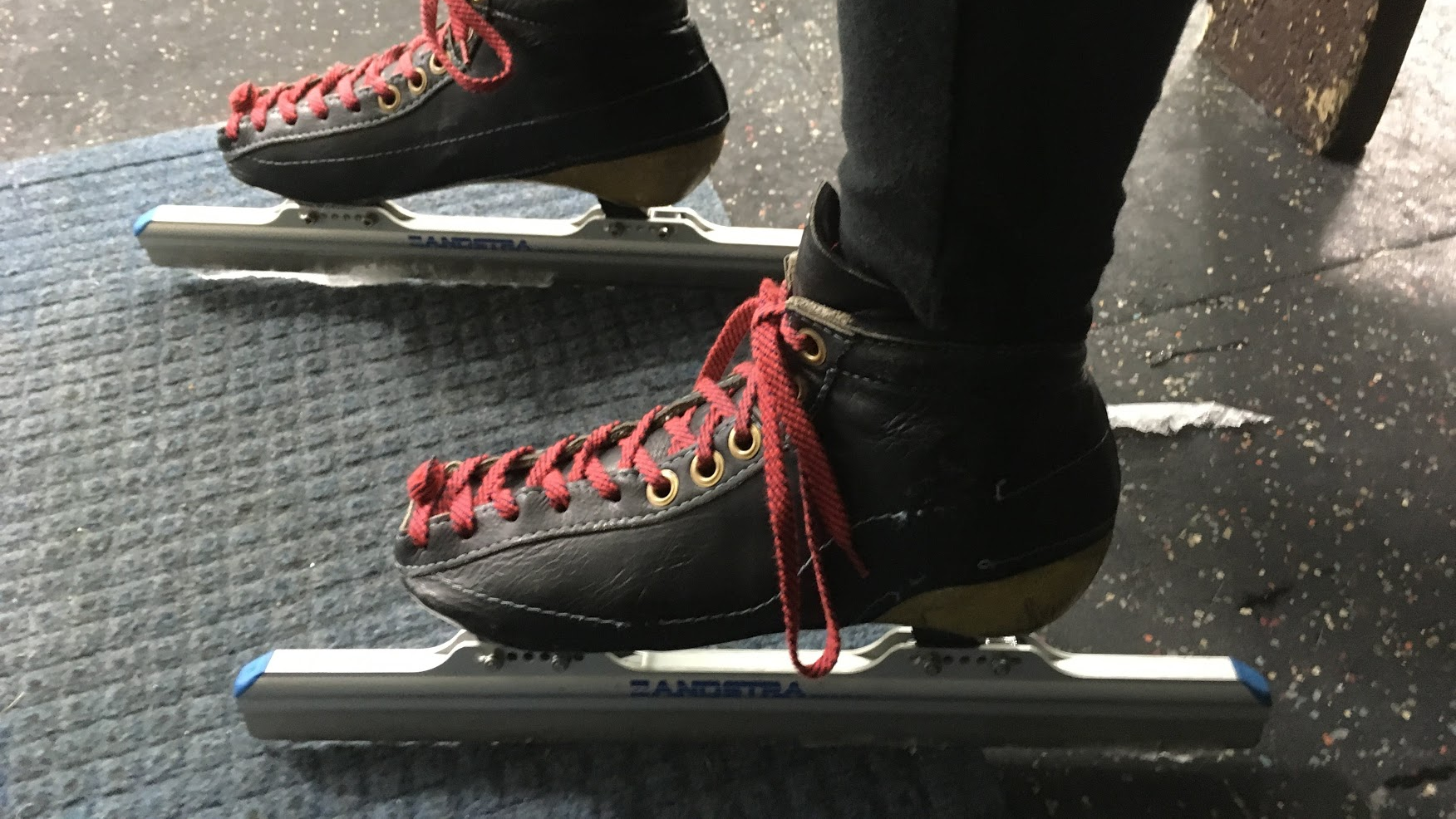 I met up with the Pittsburgh Speedskating Club at a rink near the city during open skate hours. (Hockey is so popular that it's hard to get dedicated ice time at a reasonable price. It's hard out there for obscure winter sports.) They do short track skating, and one of this year's US short-track competitors, John-Henry Kreuger, trained with this club when he was young.

They let me borrow a pair of skates, which you can see in the photo above. Speed skates have longer, straighter blades than figure or hockey skates. (All ice skates are "rockered", or shaped slightly like the bottom of a rocking chair, which helps you to glide in a curved path when you're leaning on the side of the skate.) They also have very low ankles, so you can bend your knees and get your body weight closer to the ice.

I'm not gonna lie: The hardest part of skating with speed skates on is simply skating. If you're new to the ice in general, it will take a while to get comfortable on skates. Lessons in figure or hockey skating might be a good first step before you show up to speed skating practice.

I've done a tiny bit of figure skating (I can do a three-turn and a waltz jump, and that's the end of my repertoire) but most of my skating experience is on wheels. I used to play roller derby, which involves doing speedy laps with strong crossover pushes around a tightly curved oval track. I've got this, right? But as soon as I stepped on the ice it was like I had to learn to skate all over again. I talked to another newbie whose prior experience was in figure skating; we both felt lost.

So for the next hour the coaches helped us learn the simple art of putting a foot down, pushing, shifting weight, and picking the other foot up. You want your toe, knee and face to all be lined up on top of each other, one coach told me. On one side of that vertical line are your opposite arm and leg. But on the other side of that line, countering that weight, all you have is your hip. The lower you get, and the more you stick your hip out, the more stable you'll be.

Besides shifting weight, the other tricky skill was finding my edges. All ice skates have two edges, meaning that big knife on your foot is really, if you look closely, two parallel knives. When you're gliding straight forward, you'll be on both edges of the blade. But as soon as you lean into a turn, you're on just one edge or the other.

So I spent most of the time practising my crossovers and finding the exact way to position my weight and my feet to get that outside edge to dig into the ice. Of course, I wiped out once - I was going around a turn, and before I knew it I was sliding and rolling on the ice. I don't know exactly what happened but I got up and was covered in shaved ice from waist to toes. Hey, falling on your first day is good, right? It means you're trying.