Where Does The Money From Your Electricity Bill Go?

Every month or quarter a bill comes in from your electricity retailer. While some of that bill can be directly attributable to the volume of electrons that flow into your gadgets, household appliances, lights and other energy-eating devices, a good portion of it has nothing to do with your electricity consumption.

As well as electrons, that bill needs to pay for the infrastructure, meter readers, data management and other bits and pieces that make the power system work. Here’s where the money goes.

Let’s start with those electrons. Assuming you’re using power from the National Electricity Market (NEM), that electricity is produced from a number of different generators that are registered in the NEM. In some cases, that power is transferred from one power generating region to another (the regions roughly follow state borders excluding the Northern Territory and Western Australia).

Every five minutes, the market operator, the Australian Energy Market Operator (AEMO), determines how much energy will be needed to supply the market. Energy generators bid energy into a “pool” – a virtual holding of electricity – that will supply the market.

The determination of which generators will supply the market is made on the basis of the least expensive way of supplying the NEM’s needs.

In this scenario, the following energy would be dispatched in order to fulfil the 10mWh need.

That’s the least expensive way of supplying the required energy. All the generators that are dispatched (that’s the market term for accepted bids) are paid at the highest rate of all the accepted bids. So, in this case all three generators will be paid $6 per MWh. This is because we have no way of tracing which electrons are used by each end-use customer.

The prices per MWh vary between generators and within each generator’s capacity as the costs vary depending on what it costs to produce the energy. It’s like your car. At some speeds, it runs more economically than others. Energy producing plants can deliver energy at more economical rates when they operate within a specific set of conditions.

Read more
” excerpt=”When you travel internationally, you should always throw a plug adaptor into your bag. This graphic is a quick reference to common plug types and the countries in which they’re used. This way you’ll know which type of adaptor to pack for your trip.”]

In some situations, generators will actually bid negative prices, just to keep their plants running as the cost of shutting down and restarting is not economical. There’s market rule that caps the negative price at -$1000.

In periods of high demand, the price can shoot up because generators need to run a plant that is more expensive to run. In that case, the maximum price they can bid into the system is $13,500.

The whole system becomes far more complex when you factor in regional pricing (each region has its own energy spot price) and the flow of energy between regions using interconnectors.

Energy prices – the other market

While much of the media’s attention goes into the price variances of the spot market, it’s important to understand that’s not the only way energy prices are set.

Electricity retailers (the people that send you your bills) enter into contracts with generators. Those contracts specify that the retailer’s customers will use a certain amount of energy over a period at an agreed price. This protects the retailers and, in theory, us from the price volatility of the spot market.

So, when you see the electricity price spike, it’s important to realise the spot market is only part of the story.

At risk of sparking a debate, it is interesting to see what the fuel mix supplying the pool looks like. According to data from AEMO, more than three-quarters of our power still comes from coal-fired plants with gas contributing 9% and a little over 13% coming from renewables (water, wind and solar).

That’s simply because coal is still cheaper to use. But, if coal was less economical, or the other sources could compete on price, then the equation could tip a little faster than it is today.

Getting the electrons to you

Once those electrons are produced, they need to get to you. That happens via two sets of poles and wires; the transmission and distribution networks.

How Does The Electricity Grid Work?

Where would we be without electricity? Assuming that you own a fridge, there won't be many points in your life when you aren't making use of it. But what do we mean when we talk about the electricity grid?

Those networks cost money to build, maintain and operate. So, their costs get added to the energy price. We see those on our bills as supply charges. These are costs you incur whether you use a single electron or not. Retailers collect them and then disburse them back to AEMO who distributes them back to the appropriate entities or to distributors directly.

The networks operate as monopolies – there’s little point to having competition that sets up parallel infrastructure that results in two or more sets of cables going everywhere. The prices the networks charge back to the network are set by various regulators depending on what state they operate within.

The distribution networks also employ folks to collect your meter readings and process the data so it can be used. In the old days, that involved someone walking from house to house and reading the numbers on the meter. But over recent years we’ve seen smart meters installed in more and more homes.

Typically, these store a meter reading every half hour (which can be several different readings depending on what sort of meter you have installed) and transmit it back to the mob looking after the meter data. So, that’s another party that needs to be paid on the way through.

What’s the point of having retailers?

Once you realise that all the “useful” stuff in the market comes from generators and the networks, you start to wonder what value retailers add to the chain. Aside from preparing and sending a bill – what do they do?

Those contracts I mentioned earlier are important as they protect consumers from spot market volatility. So, retailers have somewhat invisible role in protecting us from the minute-by-minute fluctuations of the market. For example, I’m currently paying a fixed price of around $0.30/KWh. But the spot price, right now, is over $107/MWh. When you do the conversion between KWh and MWh you find the spot price is over three times what I’ll be charged.

With winter in full bloom and the days getting darker, you're probably blowing up your energy bill. There are a few simple things you can do to cut that bill down to size.

That’s possible because my retailer (who only negotiates with companies that use renewable energy sources to ensure they are bid into the system) has negotiated a price that makes that possible.

The other benefit of retailers is the “one throat to choke”. Instead of having to potentially deal with multiple entities in our heavily privatised market, you have one number to call for everything.

Who gets the money?

Now that we have an idea of who’s getting paid and what they’re doing, let’s look at the carve up.

This is the breakdown from my retailer, Powershop. 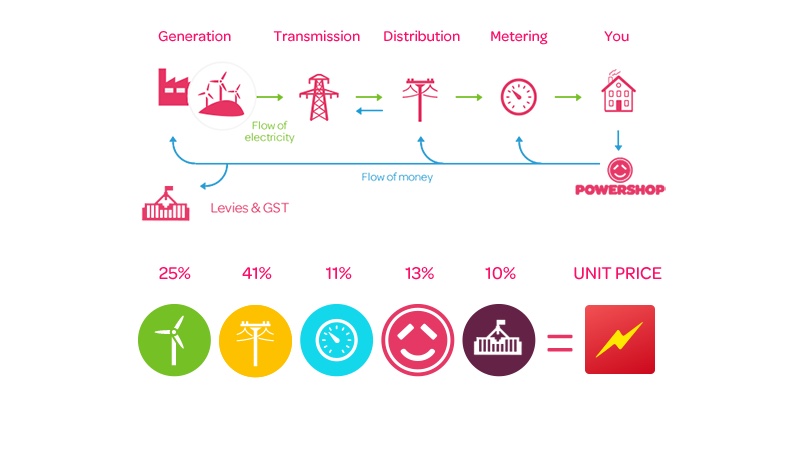 Their margin on the bill is just 13% – less than $7 on every hundred bucks I spend. On my annual spend of around $1400, they’re making less than $190. Note, this is a couple of years old so the precise percentages may be different. And they’ll also vary depending on your retailer and where you live.

Different distribution networks (the poles and wires in your streets) charge retailers differently so you’ll see some difference in daily charges. And, because the spot price for electricity is more or less state-based, there can be some further difference.

The big winners are the poles and wires mobs who, between them, collect about 40% of what you pay with generators collecting just a quarter of the cash.

It’s pretty easy to point the finger at your retailer when you get an ugly bill. But the reality is the retailer’s margins on a bill are quite thin. The real money is going to the network operators who have, arguably the cushiest job in the NEM. They operate without competition, with largely fixed costs and a regulated income that ensure they make a decent profit is responsibly managed.

Generators are under pressure as public pressure increases to reduce our dependence on carbon-based fuels.

Retailers are making less than 10% on each bill and one complaint to the ombudsman can wipe out a couple fo year’s margin on a customer for them. And they are in the firing line for every complaint and politician looking to score some cheap sound bites on the nightly news.

I’m in the process of installing solar at my home as a decent set up is less than $5000 now so I think I can achieve payback in about three years, even if I get nothing back on the feed-in tariff (which has been steadily dropped back by successive governments over the years). With grid prices rising in the long term, the best bet is to reduce reliance on the grid if you can afford the initial outlay.

Many retailers now offer cheap or no-cost financing for solar installations making it a good option for reducing your costs. But getting away from those network supply charges, which you’ll pay whether you use energy or not, is hard. Going totally off-grid is pretty hard and I’m not convinced the current generation of battery tech for homes is economical enough yet to make an off-grid possible of financially viable – yet.

Disclosure: Anthony Caruana worked from AEMO and its predecessor NEMMCO, for ten years and then at Powershop as a consultant