Top 5 NAS Units For Your Home Or Business

We now store more content at home than ever before. And even though streaming services like Netflix, Stan, Apple Music and Spotify are changing the way we access media, we still need to ensure data is reliably backed up. Many of us – me included – have large libraries of digital content we’ve already paid for and want to be able to access at home or work. So, what makes a good NAS and what’s available on the market?

One of the first questions you need to ask when choosing a NAS is how many drives do you want it to support. While there are NAS devices out there with a single drive, you can save a few dollars and simply connect a regular USB or eSATA drive to many of the routers on the market today if all you want is a simple, shared storage solution.

If you want to boost performance and add some data protection to the mix, you’ll want a NAS that can support at least two, but preferably more, hard drives.

With a two drive NAS, you can choose to that the drives as one large volume (RAID 0) or as a redundant pair (RAID 1), where all your data is written to both drives at the same time. That way, if one drive fails, your data is safe on the other.

For the record, I have a five-bay NAS running as a RAID 5 array.

It’s not just the NAS you need to consider

NAS performance and reliability is heavily dependent on the hard drives you install. When choosing hard drives or SSDs for your NAS, look for drives that are made to be used with a NAS, rather than regular drives used in a computer. NAS drives are designed to run for long periods of time and handle the read/write needs of a NAS, which are quite different to those in your computer.

All the major drive makers have disks in their product ranges specifically designed for NAS applications. Look for those as you won’t get the best from your NAS with cheap drives.

When I first started looking at NAS gear, there were just two things to worry about; the number of drive bays and performance. But today’s gear is far more sophisticated and it really more like a server than a file storage and distribution system.

Most NAS gear now supports the installation of plug-ins and apps that extend the usefulness of the NAS. For example, there are apps for automatically downloading files, transcoding media so it can be watched on different devices, secure remote access, media servers that support Plex and iTunes (for music only in my experience), backups, web servers and other useful tidbits.

Many also support being used to store data from surveillance cameras. If this is one of the use-cases for your NAS, make sure your camera is supoirtedf by the NAS software or firmware.

While you might not need all those things, they’re useful to have available should the way you use your NAS change.

Depending on where you put your NAS, the appearance and noise emissions may be a big deal.

Noise levels will be dependent on the disks you choose and the level of activity. I keep my NAS by my disk in a small shelving unit that provides space around the device so it’s well ventilated but also muffles some of the sound during periods of high activity, such as when it’s being used to backup a system or I’m moving lots of data around.

If you’re considering a NAS for the lounge room, consider using SSDs as they are much quieter than spinning drives. However, you might need to sacrifice capacity depending as they are often more expensive per gigabyte than hard drives.

There’s a stack of great NAS options on the market, but here are five that we are particularly enamoured with. We’ve also included links on where to buy. 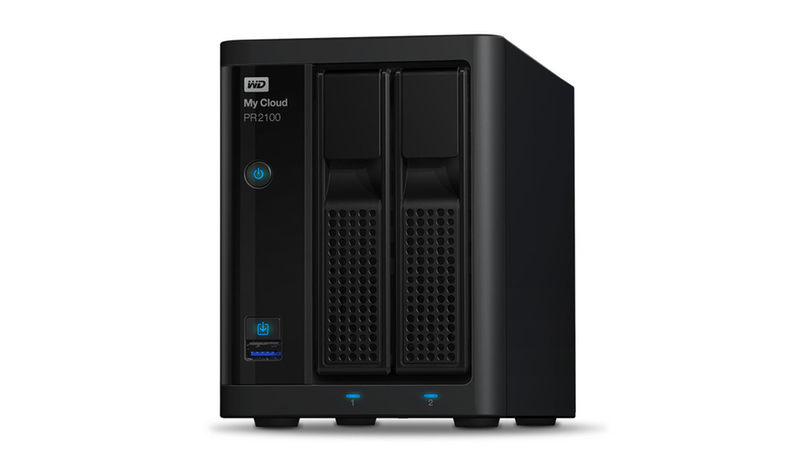 If you’re looking for a small two-bay NAS for sharing media and a few files around the home or small office, the Western Digital PR2100 is a solid choice. It supports RAID 0 and RAID 1 and is capable of streaming 4K media. It can be loaded with a pair of drives of up to 10TB each, giving you plenty of capacity.

It supports a variety of apps including Acorns for backups, Plex for sharing media as well as Dropbox so you can keep a networked version of your online files handy and you can create a local WordPress blog if that’s something handy for your office.

You can buy it either as a barebones unit, where you can add your own drives for around $630. It’s also available in capacities of 4TB, 8TB, 12TB, 16TB or 20TB if you prefer to get one ready to go. 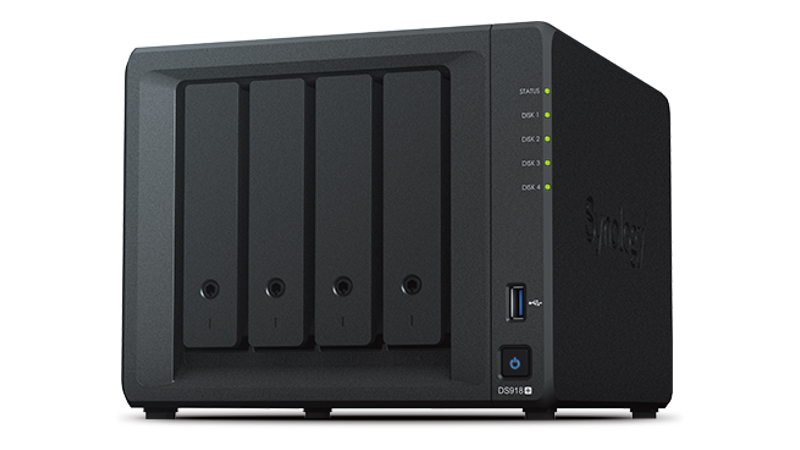 Synology has a NAS for every occasion. Whether you’re a business looking for a high capacity rack-mounted system, or a a home user after a simple two-bay NAS, they have all of that and everything in-between covered. The DiskStation DS918+ is a four-bay NAS that the company’s DiskStation Manager (DSM) software. Rather than the usual browser-based configuration system, DSM looks like a regular desktop GUI that present all of the NAS management and configuration tasks clearly.

There’s broad app support for all sorts of utilities as well as the option to use Synology’s own office productivity tools, mail server, calendar system, chat client and file sync and storage solution.

While some of those extra applications come with their own licensing fees, they give you the option to create your own cloud solution rather that relying on external companies. That may be of interest to some folks who prefer to not trust their corporate data to third parties and off-shore entities.

It can be loaded with up to four 12TB drives. A diskless Synology DiskStation DS918+ will set you back about $785. 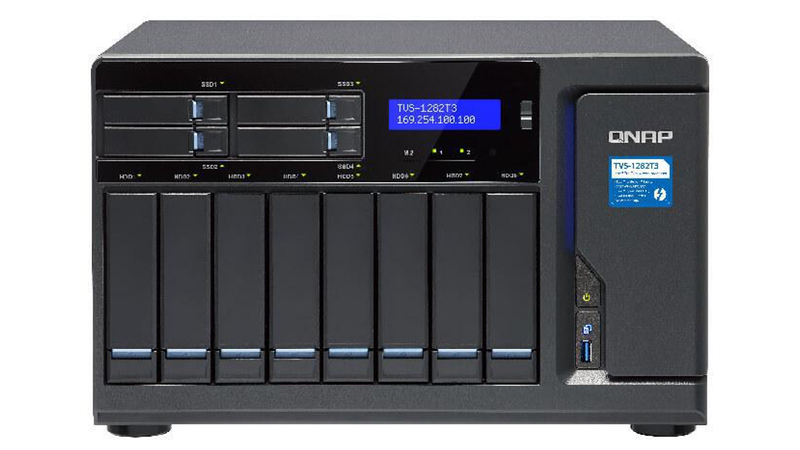 If you need gargantuan storage capacity, then the 12-bay QNAP TVS-1282T3 might be just what the doctor ordered. Those 12 bays are split between eight traditional 3.5-inch disk bays and four 2.5-inch bays making it easy to combine tractional drives with faster SSDs. And, as well as supporting a LAN connection, it boasts four Thunderbolt 3 ports for those who want the data protection and capacity benefits of a NAS but the speed of a local 40 Gbps connection.

As you’d expect, it also supports a wide variety of different backup, file management, media serving and security tools. It even boasts a Gmail backup tool – something I suspect many of us would find reassuring to have around.

At a little over $5100, the QNAP TVS-1282T3 is not an insignificant investment. But it’s a NAS made for those who want plenty of storage, oodles of performance and have the budget to pay for it. 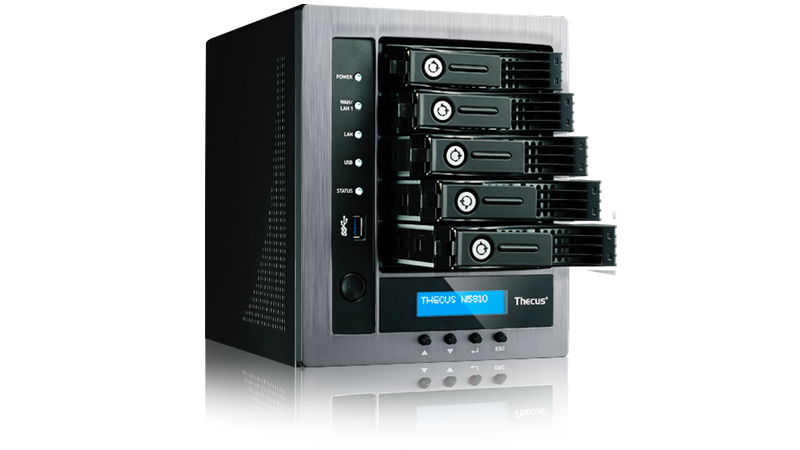 The first NAS I ever owned was a five-bay Thecus and it’s still running, almost continuously for the last eight years or so. Their more recent five-bay NAS, the N5810 looks a lot like that older model but supports larger drives and boasts a HDMI port as well as better data encryption along with the expected support fro a wide variety of different RAID levels to keep your data safe and deliver solid performance.

Unlike many of the other NAS makers out there, Thecus has focussed on capacity, performance and reliability, eschewing the addition of lots of third-party add-ons. While you can use it to share printers and other USB hard drives, the only utility you can add is Acronis’ True Image backup server.

If you want to install other applications such as WordPress, you can do it but you’ll need to manually install the required components and configure the settings yourself. 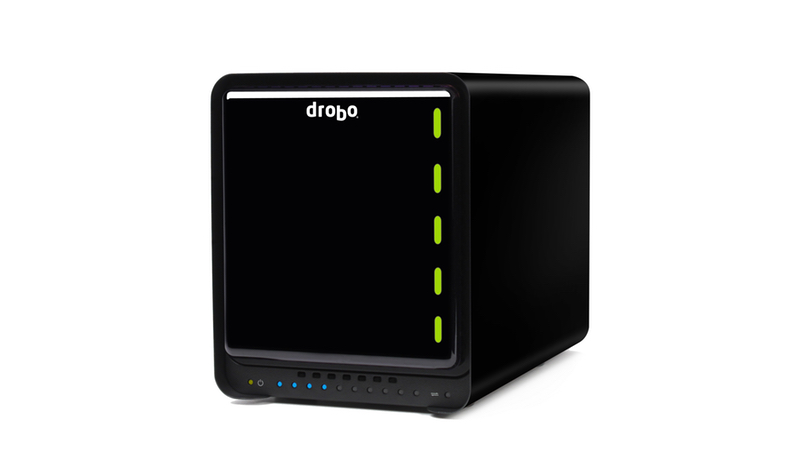 Drobo has been around for a while now, offering a more stylish take on the traditional NAS. The Drobo 5N2 is a great looking five-bay NAS that doesn’t require a technical qualification to use. It boasts the ability to combine drives from different makes and of different capacities and then increase the capacity as your budget allows by removing the smallest drive and replacing it with a larger one.

They use a system Drobo calls Smart Volume technology. Smart Volumes are thinly provisioned volumes that automatically utilize capacity as needed from a common pool of storage. Additionally, as data is deleted, free capacity is returned to that common pool. Typically, when you set a NAS up, you need to make decisions early on about how much space to allocate to each volume. Drobo’s approach is a lot more flexible and protects you from the annoying moment when you find one volume is barely used while the other is full.

You can expect to pay around $850 for a barebones Drobo 5N2.