Where Can You Spend Bitcoin In Australia?

Bitcoin’s had a bit of a rocky end to the year. After clearing the $25,000AUD mark earlier in December, in the lead up to Christmas its value plummeted and people panicked. Especially new Bitcoin investors, who thought the going was good. It seemed everyone wanted to get rid of their coins before it dropped any further – but where exactly can you spend your bitcoins in Australia anyway?

As it turns out, not very many places.

We recently provided Lifehacker readers with a comprehensive guide to buying Bitcoin in Australia. Now you’ve bought into the hype and you’re holding onto your coins for dear life as the market crashes.

This isn’t the end times for Bitcoin – it’s still just getting started. However, if you are beginning to worry about your investment and want to spend some coins to see how far they take you, you’re likely going to struggle to actually find a place where you can cash them in. Personally, I am not sure that I would be spending any significant amount of coins right now – but it’s not like I can do that anyway, considering the few places that accept them as payment.

Over the past few years, several companies have accepted Bitcoin as payment for goods and services. Some of the most notable are Dell, Steam, OKCupid and Microsoft. However, even though Bitcoin’s price rocketed upwards, most of these services stopped offering Bitcoin as an option. Of the four listed there, it’s only Microsoft that still allows you to do so, with Dell, Steam and OKCupid pulling their support for the cryptocurrency over the last year.

These services generally offer luxury buys – not necessities – so perhaps the uptake hasn’t been as strong as anticipated in these areas. Indeed, that was why Dell stopped offering Bitcoin as a payment option earlier this year. How about products you buy daily though? Coffee, lunch, public transport tickets, fuel?

You won’t find too many places to spend your Bitcoin for those either.

Coinmap provides a heat map of places around Australia and New Zealand where Bitcoin is accepted as payment and you can clearly see in the image below that most of the activity is focused in the major urban centres, along the east coast of Australia. 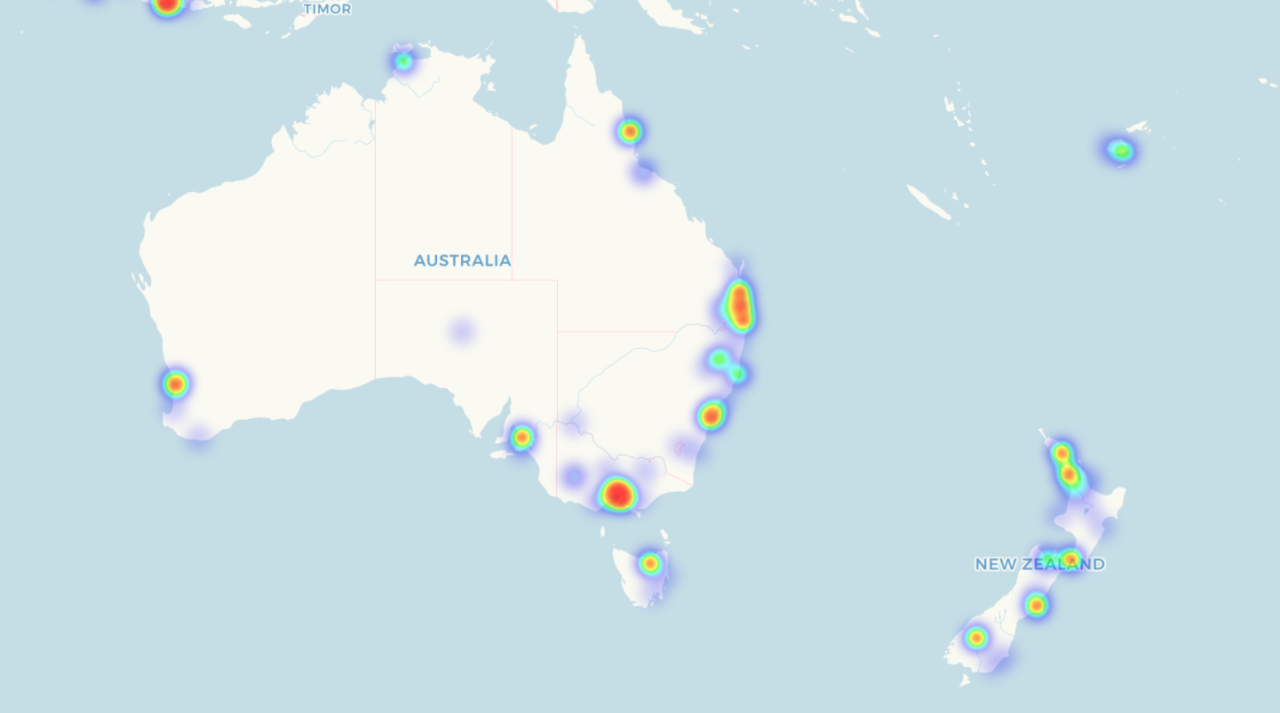 If you begin to look a little closer, you find that there aren’t a lot of places within that heat map actually providing somewhere to spend the coins. Within Sydney’s CBD a spattering of 41 restaurants, financiers, Bitcoin ATMs and bars are the only places the currency can be used. Most of these locations, but for the ATMs, appear to be small businesses.

The same can be said for Melbourne – which can probably claim Australia’s Bitcoin Capital, if that’s a title they’re really after – with 54 CBD locations. Again, they’re mostly small businesses – there’s even a podiatrist that apparently accepts Bitcoin as payment. No small feat.

Bitcoin is highly volatile and even eight years into its life, still remains firmly in its infancy. The mainstream press are more than happy to report the ups and downs of the currency and give air time to those who both decry Bitcoin as the future and champion it as a way forward that it’s all become kind of messy.

There also exists a pervasive idea that Bitcoin really isn’t anything at all, that it doesn’t exist as a tangible object you can hold, and the complexity of the technology that underlies it only serves to widen the knowledge gap between consumer, investor and big business. Unless Bitcoin can overcome that while still maintaining its core ideals of decentralization and fast transactions, we will continue to see few places support it as a payment option.

I am sure 2018 will see greater adoption of cryptocurrency by the mainstream but whether or not it can make the leap to larger, more well-known businesses will truly determine how far the currency can go over the coming year. With many altcoins announcing partnerships and constantly improving their services to get one step ahead of Bitcoin, it would serve the crypto well to ensure that it has value in the real world.

Let us know in the comments if you’ve been purchasing anything with Bitcoin!