Anybody can spew out some half-arsed apology to save face, but a real apology takes serious introspection and sincerity, and focuses on helping the victim heal. It isn’t easy to do, but this simple interactive tool can help if you’re struggling. “It’s good that you’re here,” the first screen reads when you load it up. It is good.

How Not To Apologise

Man, this last couple of weeks has seen a veritable tsunami of sexual-harassment allegations, right? And while some of the accused are silent or flat-out denying any culpability, others have been swift to apologise.

The tool, called Am I Part of the Problem?, comes from game designer and activist Elizabeth Sampat. It’s a step-by-step self-examination tool she built using the Twine open-source storytelling platform which allows those who need to apologise a way to better understand the intent of their actions, how they harmed others, and what they can do to make amends in a way that benefits the victim. It gives you an opportunity to be honest without being judged and learn how you can not only apologise better, but how you can grow as a person.

For example, you’ll be asked right off the bat if you meant to hurt someone with your actions. If you say yes, you’ll be shown a list of reasons why, such as “I was angry,” “I was jealous,” or “I was insecure.” Then you see a message like this: 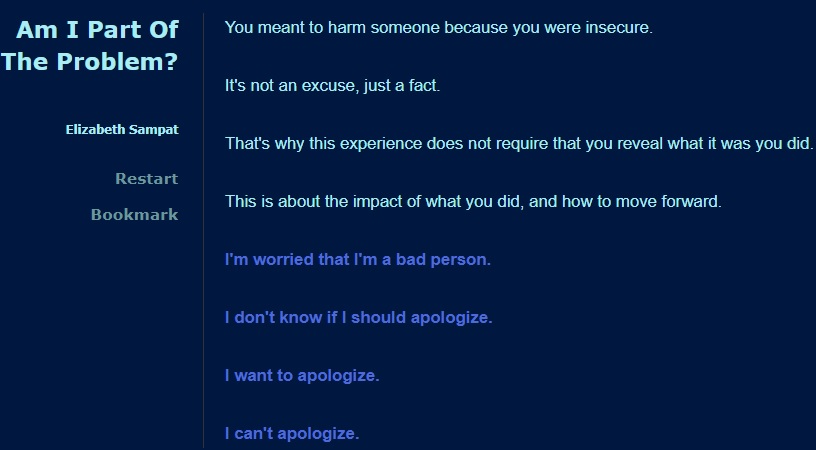 At that point, if you say that you’re worried that you’re a bad person, the tool keeps you focused on what matters in a good apology by saying:

As you go on, the tool walks you through the process of writing an effective, well-meaning apology, and tries to see if amends can or should be made for what you did. 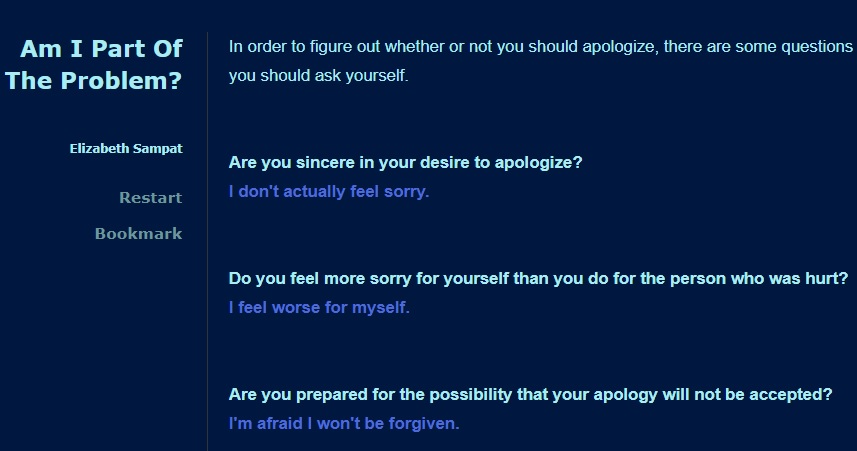 In some cases, the tool will even warn you to hold off on an apology for now, as it might interrupt the victim’s healing process. There are several types of scenarios built into the tool, and they all end with additional resources for transgressors to consider. Sampat explained to The Verge:

I know that it can be really overwhelming to realise that something in your life needs to change, and not know where to start. I wanted to make sure that people using this tool at least had a place to begin.

That said, Sampat also admits she’s no expert. Am I Part of the Problem? draws from a wide variety of real psychology and professional resources, including the 12-step program found in most recovery programs, but it’s only a starting point. Still, if you’ve hurt somebody recently or in the past, give this tool a try. It will help you apologise for what you did the right way, but it might also open your eyes to a larger problem you can work on. Check it out at the link below.

Am I Part of the Problem? [Elizabeth Sampat]