The Best Web Programs For Teaching Kids How To Type

Oh, sorry, my nine-month-old hasn’t yet mastered the keyboard, but I’m letting him indulge his love of button-mashing early because typing skills are more essential than ever. It’s important for kids to form good typing habits early. Today’s generation may never know iconic type teacher Mavis Beacon (who, as it turns out, is a FRAUD), but fortunately parents have access to loads of online typing tools to help their aspiring stenographers achieve total keystroke command.

Here’s a rundown of our favourite programs:

Beginning typists should start with hand placement, key recognition and proper form, so it helps to find programs that boast good visual demos that follow along in real time.

Advantages: Many sites/apps gamify typing, but where QwertyTown stands out is in its head-to-head matchups, progressively-unlockable features and social rewards. Users design their own avatar and participate in solo or league-style play, which better integrates with how kids use technology, while offering competitive incentives for improvement.

Drawbacks: With separate experiences for teachers and students, QwertyTown’s software is most ideal for classrooms (where there’s also a built in community of users), which limits its appeal for home use. They offer a 30-day free trial, but after that, it will cost you.

Typing Club prompts players to type out words to hurl various objects at an attacking (and honestly, pretty cute) yeti.

Typing Club prompts players to type out words to hurl various objects at an attacking (and honestly, pretty cute) yeti.

Drawbacks: The site design feels a little dated, and is cluttered with ad placements (users can disable ads by signing up for a premium profile). Though the pumpkin-chucking ninja is fun, it would be nice to see more variety in free gameplay, too. Also, this is extremely trivial, but the name “Typing Club” isn’t going to make your kid feel super cool (as if learning typing in general will).

Advantages: BBC does more than churn out droll television programming. Their Dance Mat Typing program lets younger users start at the “home row” and type their way through four vibrant three-stage levels. “Graduates” can also select a broad variety of typing games and tests at the KidzType affiliate (ignore that regrettable typo). The whole program nestles in nicely to their broader Primary Computing hub, offering a natural segue to more-complex digital lessons.

Drawbacks: The games are Flash-based, a bummer for those on newer devices (though perhaps it’s simply a note of dry British irony). Not having a social function built-in to software designed for kids in 2017 also feels charmlessly retro.

After your kid has mastered the basics, they will want to work on upping their words per minute and minimising errors.

Advantages: Ratatype is designed specifically to boost typing accuracy and speed. Users can’t simply power through levels, as even a paltry three typos results in a replay. If your kid doesn’t smash the keyboard out of frustration, they will surely develop Twitter fingers of the most nimble and precise variety.

Drawbacks: It makes sense that a more advanced typing program would forgo childish animations and gameplay variety, but Ratatype’s lessons and tests feel somewhat clinical, which doesn’t inspire much replay.

Advantages: Key Hero is handy for users looking to chart their progress, as they offer robust stats to track personal progress, alongside community percentile placement. Another huge plus: they use complex passages from compelling literature in their tests (i.e. V for Vendetta, The Man Who Laughs), a refreshing break from other programs’ paragraphs, which often feel lifted from standardised reading tests.

Drawbacks: Key Hero offers even less frills than Ratatype, with the only faint pulse of joy in the text selections (hard to savour when you’re trying to type them so quickly) and a chart trending in a favourable direction. The site’s design is also rather (sigh) text-heavy. 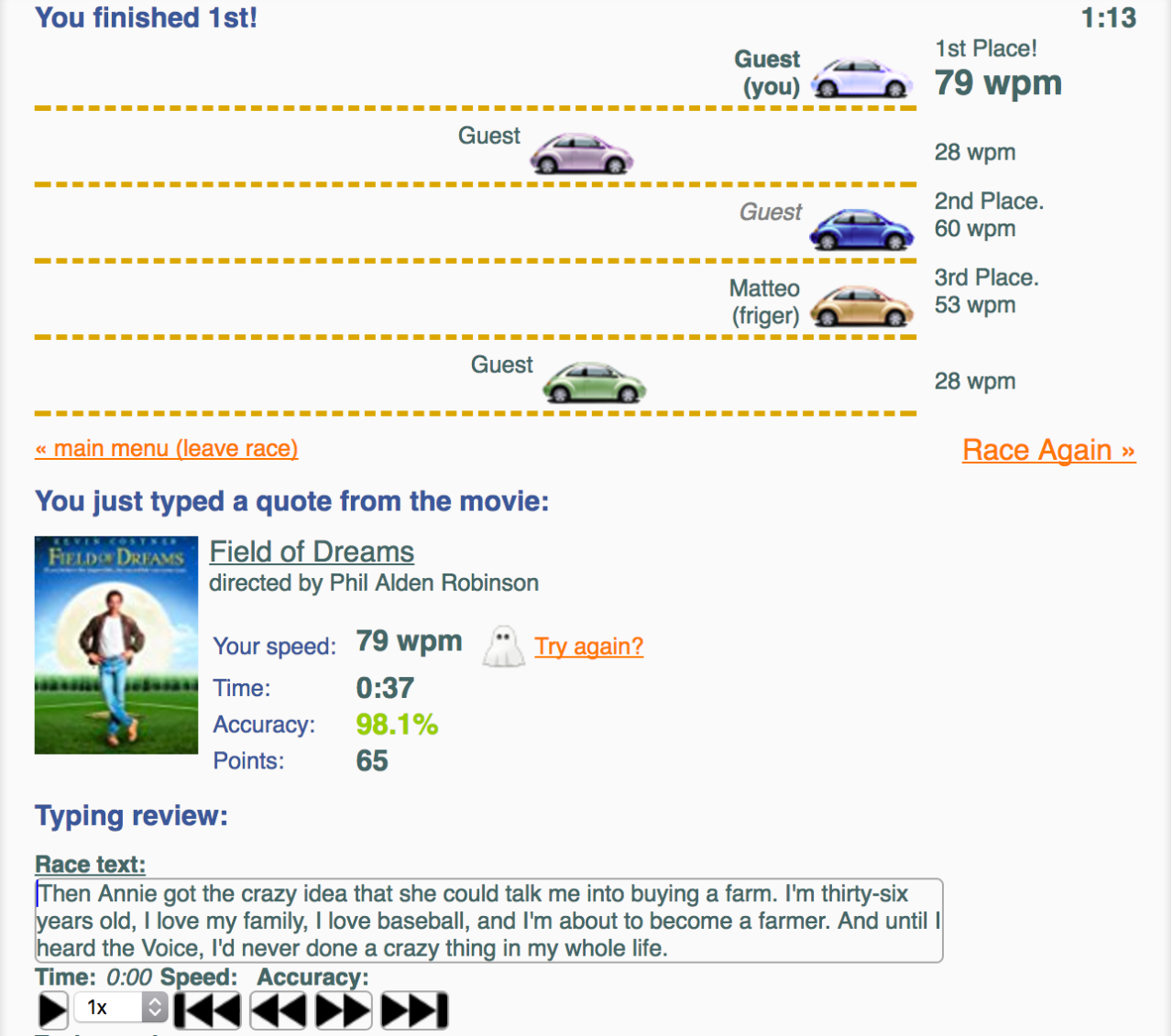 TypeRacer pits users against other typists from around the globe in a frenzied race to type pop culture passages.

TypeRacer pits users against other typists from around the globe in a frenzied race to type pop culture passages.

Advantages: Finally, a little fun. TypeRacer pits global users in a competition to type a chunk of text fastest (all errors must be corrected to finish). VW Beetles move across the screen in realtime, encouraging hyper-focus during a photo finish. In a fun twist, text selections are pulled from more than literature, also drawing from song lyrics and TV/film quotes.

Drawbacks: Fun as the competitive angle is, motionless VW Beetles inching across dotted lines is little more thrilling than watching a progress bar. Again, it’s a bit much to expect an immersive experience for an intermediate typing game, but a bit more thematic pizazz would be nice.

These are our favourites on the web, but there are many other options, too, some of which install software if you prefer a program separate from the distractions of the internet.

Now if you don’t mind, my nine-month-old has to get back to work.