The Best Way To Freeze Bananas

Nothing is dreamier than a frozen banana in a smoothie and for bakers about to embark on a banana bread or muffin, nothing is easier than having frozen bananas on hand. But the internet is full of bad advice about how exactly to freeze these lovely fruits.

Method #1: Freeze the bananas whole in their skins.

1. You cannot peel a frozen banana easily. In order to peel it you need to either defrost it the old-fashioned way (via time); put it in the microwave, which adds a second step to the process; or slice it out of its skin, a process I find a little fiddly.

2. There is nothing grosser than a defrosted, unpeeled banana. Defrosting an unpeeled banana produces a slimy, sticky beige liquid you have to figure out how to get rid of, which adds another step to the process. (I’m not in fact Harold McGee but I imagine this happens because the peel, unlike the fruit itself, contains a lot of water.)

So that method stinks.

The instructions usually run along the lines of: “Peel the bananas, cut them into chunks, lay the chunks — not touching — on parchment-covered cookie sheets and put the sheets in the freezer. Then, when they’re frozen, put the chunks in a Ziploc or tupperware in the freezer.”

2. This requires a lot of cookie sheets and freezer space, especially if you’re planning to freeze a whole bunch of bananas.

3. If you are freezing bananas to use in a baked good (rather than a smoothie) the recipe usually calls for a number of whole bananas, meaning you’ll have to line up a bunch of chunks in a length that might approximate a whole banana, which adds yet another step. OK, so this is a minor quibble.

4. In my experience, unpeeled bananas stick to each other in the freezer and are very difficult to separate, meaning that after you’ve gone through the trouble of isolating each chunk on the sheet pre-freeze, they might just congeal into a solid block when thrown together in the Ziploc, and you’ll be left trying to extract chunks with a knife or some other sharp implement, which is a terrible idea. 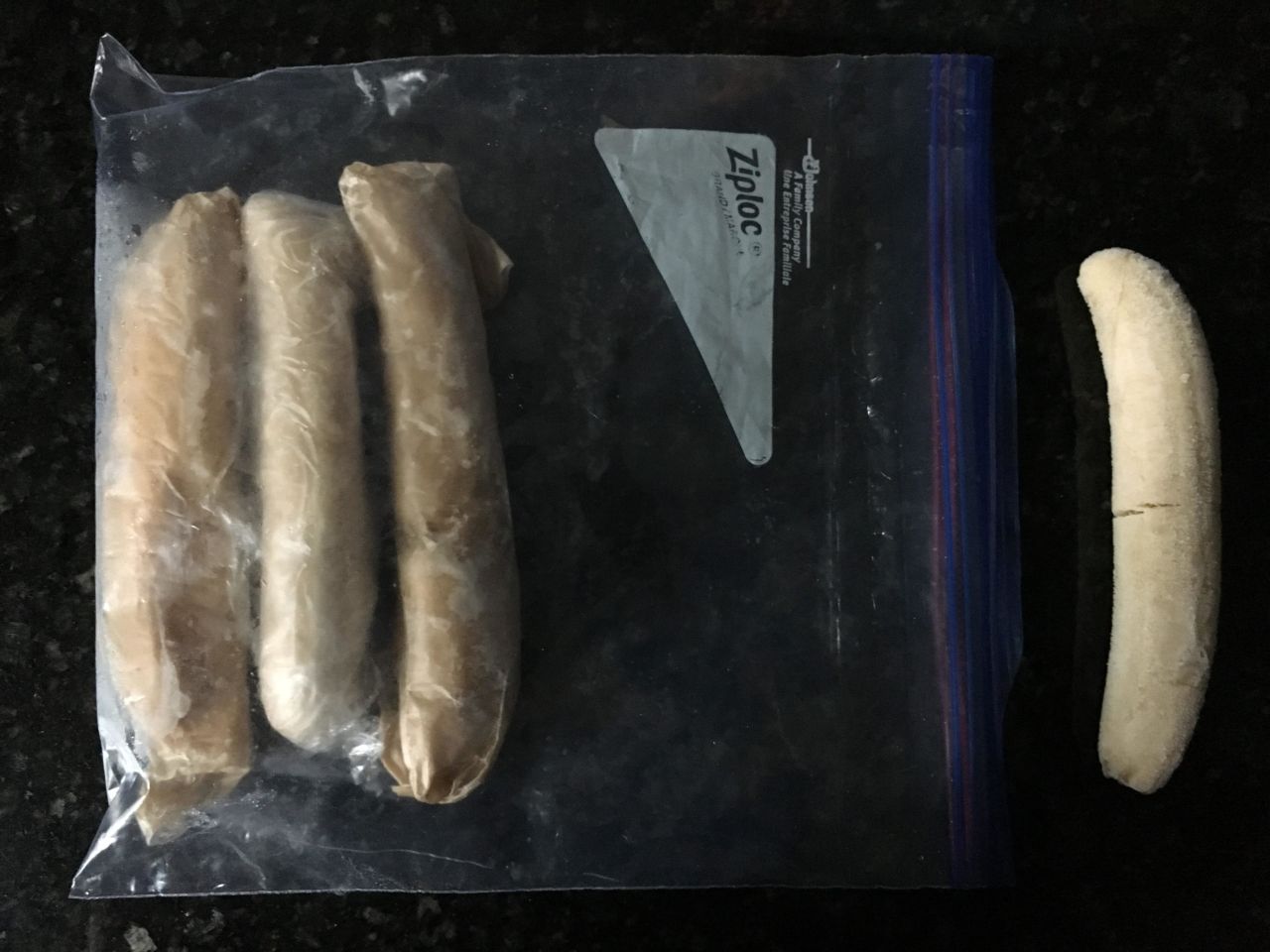 1. Peel the banana (if you do it from the “wrong”/non-stem end you will get a much cleaner peel that takes with it more “strings” along with that nasty brown bit at the end).

3. Put the wrapped fruits in a Ziploc or plastic storage container in the freezer.

4. When you’re ready for a smoothie, so are your bananas.

If need be (say, your blender isn’t the strongest) you can easily snap the banana in two. For baked goods, you’ll still have to defrost the bananas, but you won’t have to mess with any icky ooze.

Note: Some stores offer deep discounts on ugly, past-their-prime bananas. Snatch them up! Those homely suckers are perfect for freezing (just be sure to get the peels out of the house ASAP — they’re prime targets for fruit flies).