When Apple announced the iPhone X on 12 September 2017 you’d have thought they had made peace in the Middle East, cured all disease and made a decent DC superhero movie. But the reality is they simply released a new, very expensive smartphone. They skipped version nine, delivering the iPhone 8 and iPhone X that day. I’ve been using an iPhone X for a little while now and have found that it’s a story of compromises as Apple lays the foundation for their next generation of smartphones.

I have to lay out some potential biases here. I’ve owned or used every iPhone since the 3G was released in Australia back in 2008. And while I’ve dabbled with Android devices in that time – I’ve probably spent a tenth of that time using Android – iOS is my preferred smartphone platform. I purchased my iPhone X from a local Apple Store so I’m writing about a device that has hit my hip pocket to the tune of $1829. I get that many of you will say I’m crazy for spending those dollars but we are talking about the computing device I use more than any other through the course of a day.

As it’s narrower and shorter than the iPhone 7 Plus, it’s a far more comfortable device for me to use. My hands aren’t US Presidentially tiny but they aren’t huge either so the more compact size makes it far more user friendly. It’s also a little lighter. And while the 10g difference doesn’t sound like much, it was noticeable – particularly at this time of year when I’m holding the phone up to shoot video of the kids at school concerts and Christmas pageants.

Despite the smaller footprint, the iPhone X offers more screen real-estate than the Plus-sized iPhones. And that screen is quite a big leap forward on the 7 Plus I recycled to my son. It is noticeably clearer. The use of an OLED display, for the first time by Apple in a smartphone, results in really deep blacks and the colours in photos really pop. Text is clearer and those extra pixels per inch – iPhone 7 Plus ran at 401ppi while the iPhone X has 458ppi – makes it a little easier for me to read messages and news. My eyes aren’t great but I find the iPhone X easier to read than the iPhone 7 Plus.

The updated cameras are great. It wasn’t until I compared the pics I was shooting with my older iPhones and the iPhone X that I could see the difference Apple’s work on camera tech has made. Scrolling through my photo library, it’s obvious that the cameras in later models are vastly superior to their predecessors. But I’d call this improvement incremental.

Battery life is also interesting. When I set the iPhone X up, I backed up my previous phone using iTunes and then restored it to the iPhone X. So, it has all the same apps and settings as my old iPhone. The iPhone X definitely has better battery life. I can get though a typical day without needing to find some juice in the late afternoon.

Earlier this week, I did one of my regular day-trips between Melbourne and Sydney. When I did this trip with the iPhone 7 Plus, I would be down to 50% battery by 10AM after catching up with emails in the cab to the airport, playing some games of watching some TV or a movie on the flight and following up some email and other messages. Doing the same with the iPhone X only cost me 25% of the device’s full complement of juice.

FaceID was a centrepiece of the iPhone X release. And, for the most part, it works as expected. I pick the iPhone X up, look at it and it unlocks. But then I have to flick up from the bottom of the screen (remember, there’s no home button to press anymore) to see my home screen. With TouchID, I could set it to jump to the home screen as soon as the device unlocked with my fingerprint.

So now there’s an extra step to get to my apps.

I wear glasses most of the time but not always. FaceID was able to unlock my phone consistently but there were occasions when it didn’t and I had to tap in my passcode.

One of the good things about TouchID was that I could enrol my wife’s fingers to unlock my phone. But FaceID only lets you enrol one face so she has to use the passcode to unlock my phone. It makes sense as phones are typically single-user devices but it was handy to be able to unlock each other’s phones via fingerprint.

Downloading from the App Store now requires that I double-press the power button before FaceID will allow me to download. Again – it’s an extra operation I need to carry out. And there’s a similar process when using Apple Pay.

So, while FaceID is more secure, according to Apple, than TouchID, it’s a little less user-friendly; I’m paying for better security with a little inconvenience.

But if I didn’t have TouchID before, this would be a big step forward.

Apps that used TouchID for security before work just fine with FaceID as far as I can tell. For example, my banking apps and another piece of software I’m testing for a hardware product I’m reviewing, refer to using TouchID for security but they use FaceID in its place just fine, even though the apps haven’t been updated. That’s good news for developers who want to use this for securing access to their apps.

The new animoji feature, which overlays a cartoonish character over your facial movements, is kind of fun but reminds me of the programmatic interface Apple put over the motion sensors that were part of the hard drive set up in some portable Macs a few years ago. For what its worth, I cannot see animojis taking the world over any time soon.

And there’s been some concern that Apple is sharing FaceID data with apps. For example, I used the MeasureKit app to show what data it could capture about my face. 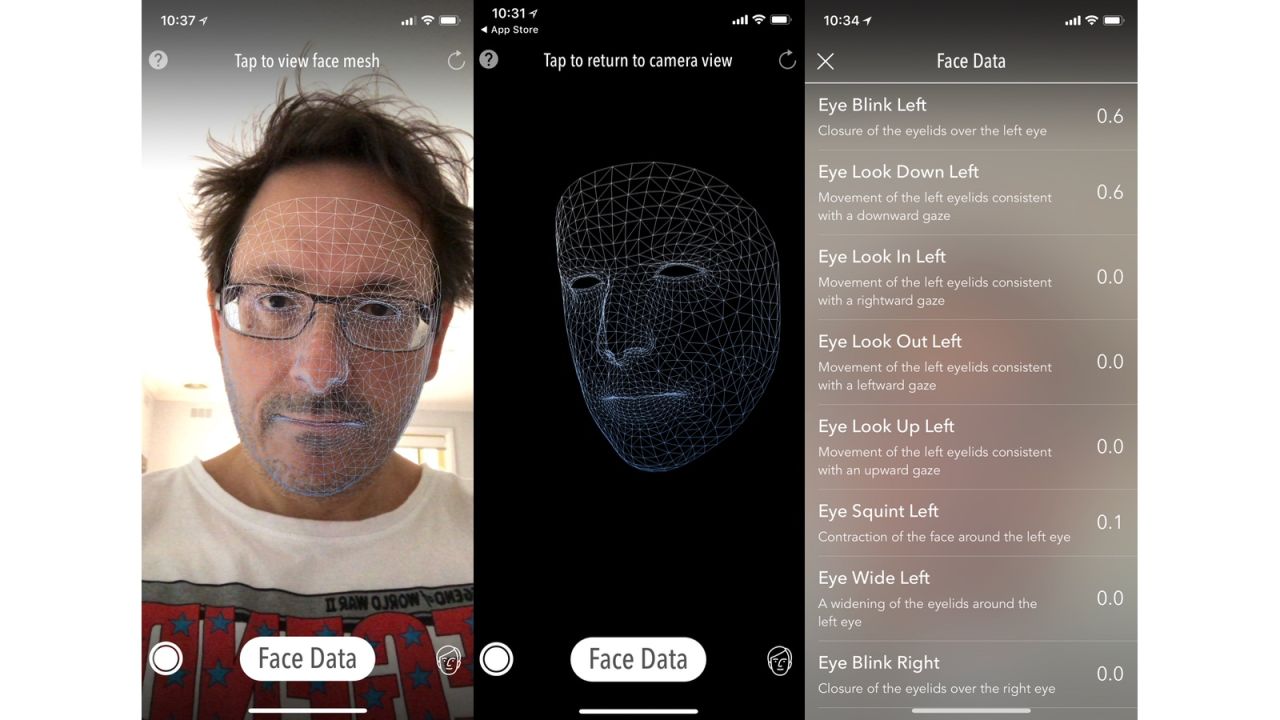 I think the jury is out on the impact of that but I also think we need to be very careful about installing apps that use facial mapping.

I haven’t had a chance to look at any wireless charging accessories yet but I have a few coming in for review. Once I’ve looked at those, I’ll report back.

But there’s no button

Apple’s decision to go for an almost complete edge-to-edge display means there’s no button to press for getting back to home or invoking other features such as some of the accessibility settings or double-tapping to access the app switcher. Many of those tasks are carried out by swiping up from the bottom of the display. Often, but not always, there’s a white bar there so you know were to swipe from.

The cutout at the top of the screen, where the camera and phone earpiece are housed, means the screen extends up with two horns in the top left and right corners. Swiping down on the left horn reveals the Notification Centre while the right horn is for Control Centre.

The app switcher is involved by swiping up from the bottom of the display and holding for a moment and you can kill apps, not by swiping but by tap-holding and then pressing the close button that appears on each app’s window. As you use iOS 11 you’ll find you need to change what you were accustomed to doing on previous devices and with previous releases of Apple’s mobile OS.

If you need to snap a screenshot, that’s now done by pressing the power and volume up buttons together.

Not having a button on the face of the iPhone is a little jarring at first but it only took a couple of ours for me to stop looking for it.

Over the last couple of weeks, I’ve had dozens of apps pop up with updates. Although this is no different to most other IOS releases, I suspect the effort for developers is a little greater this time as they have to accomodate another screen resolution and display size.

However, not all apps are updating to fill the entire iPhone X display. Many still only use the same display area as non-X iPhones. That means there’s a black band at the top and bottom of the application window. As the OLED screen displays really deep black, this doesn’t look too bad. None of the apps that ran on my iPhone 7 Plus have failed on the iPhone X.

In short, unless your apps are really old and don’t run on iOS 11 at all, I’m confident they’ll run on an iPhone X.

How breakable is it?

I’ve almost always used a case with my iPhones and the iPhone X won’t be an exception to that. For most of the last year, I kept a Quad Lock case on my iPhone 7 Plus so I could easily use it with an arm-band or on my bikes.

Although I recently tested some 3SIXT cases and accessories, I’ve purchased a new Quad Lock case which I’ll use. The iPhone X has an all-glass covering which means it’s potentially one of the most fragile iPhones on the market. In the US, Consumer Reports did their tumble test on the iPhone X, revealing it’s more fragile than the iPhone 8.

When it boils down to it, the things I most use my smartphone for are messaging via email, SMS, WhatsApp and a couple of other tools that are multi-platform, a couple of games, web browsing, reading the news and occasionally publishing something using one of the CMSes my clients use. And I could do that perfectly from any of hundreds of smartphones on the market today.

The reality is that Apple, Samsung and others have conditioned us into annual release cycles and most of the phone carriers have us conditioned into replacing our phones every couple of years in coordination with new contracts. I really like the iPhone X – it’s far more comfortable to use and has a vastly superior display to the iPhone 7 Plus it replaced.

But I suspect the iPhone 11 will take a lot of what we’re seeing in then iPhone X and refine it substantially.

If you’re an iPhone user and are happy with what you have, then I think you can easily hold off for another year. If you’re in the market for a new iPhone and plan on keeping it for a couple of years and have the budget to spend an extra $500 or so over the iPhone 8 then I think the iPhone X makes sense – at least as much sense as a phone that costs more than a decent computer makes sense.