How To Shut Down A Troll, Once And For All

Even if Twitter finally bans the Nazis (lol yeah right), there will always be boring, stupid, annoying and bad people on the internet. And sometimes they will find what you put online, and bother you about it. How do you deal with them without feeling like crap? We got some advice from Eli Yudin, CollegeHumor’s community manager, whose whole job is talking to strangers on the internet.

Shaming your trolls can be fun. Do it publicly, where your usual audience can see it and chime in. Most trolls are attacking a weak imagined version of you, so it isn’t hard to beat them at their own game. Here’s an example of Yudin’s work: 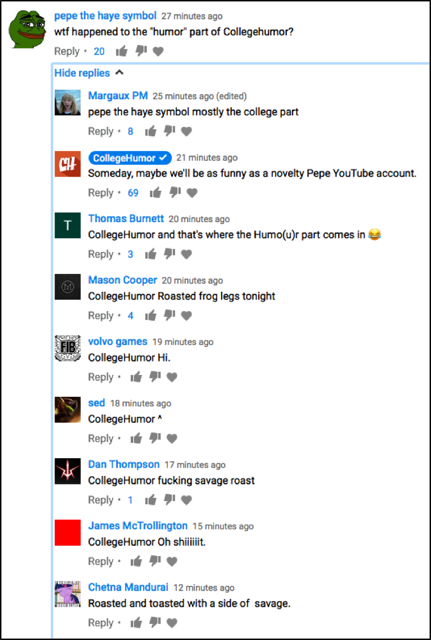 With all respect to Yudin, it clearly doesn’t take a world-shattering slam to beat a troll. You just need to show that you aren’t intimidated, you aren’t impressed, and you aren’t outclassed. If the troll has come to your page or feed to bother you, use your home-court advantage and play to your audience.

By making an example of someone, you show other trolls that they’re only embarrassing themselves. Yudin compares his work to that of a substitute teacher, who sets the tone by how they respond to the first unruly student.

Once you’ve roasted someone, let them twist in the wind without a further reply from you, and let everyone watch. You’ve moved on.

There are two conflicting definitions of the phrase internet troll, just as there are two conflicting origin stories. The more refined definition comes from the fishing technique of trolling (dragging a fishhook behind a boat) and is a synonym for trickster. This type of troll knowingly strings others along, often by aggravating them by pretending to take a ridiculous attitude or position. Ideally, they cause no harm, other than what the target inflicts upon themselves. Trickster trolling is a skill - a skill I will teach you.

Ignore and Mute the Harassers

Unless it’s your job, you don’t actually owe a response to anyone online, and some strangers should not even be dignified with a roast. “The idea of trolls used to be posting something stupid,” he says. Now it’s applied to targeted harassment. “I feel like the word troll is too fun for that.”

There are certain behaviours that Yudin never highlights with a retort, such as any comment containing a slur, or with an obviously aggressive tone. Ignoring (and muting or hiding) an offensive comment, while engaging with positive or good-faith comments all around it, sends a message.

Engaging with those good comments and replies encourages more of the same, and it helps you forget the bad ones.

Even people who mean well might be dull and annoying. Some people’s riffs on your joke will be less than clever. If you’re a woman, men will try to explain your joke back to you. You can roast or ignore, or you can give a quiet “like” so they feel acknowledged and shut up.

Don’t waste too much time replying to people who missed your joke or took you too literally. They’re going to misunderstand your reply too, and you’ll end up trapped in an “actually”-off. Even when you’re right, you often end up boring the people who got your joke. (This rule applies more to men than to women. Women shaming pedantic men will always be funny and good.)

Yudin also avoids getting dragged into unrelated political conversations. “The Facebook comments to CollegeHumor are not the place to solve the concept of reverse racism.” You’re not obligated to engage in anyone’s debate, even if they try to hold it in your online space.

Take Care of Yourself

However you act on the outside, you might really feel hurt on the inside. Pay attention to the story you’re telling yourself. Have you thought about what that arsehole on the other end of the line actually looks like right now?

“When you imagine them on the other end, rubbing their hands together villainously,” Yudin says, “that person seems so sad that you can just be like, ‘What are you doing?'” You don’t have to sympathise with them, you just have to remind yourself how little power they have over you.

It shouldn’t be like this. But most online platforms have abdicated their responsibility to ban harassers and bigots, so if decent people want to keep participating, we have to cope. Now give me a minute to emotionally prepare for this comments section.