How To Measure Pepper Straight From The Grinder

Until recently, I never measured freshly ground pepper. If a recipe called for half a teaspoon, I would simply grind the berries over the dish until I thought I had “enough”, based on nothing but my nose and how pungent I was feeling that day, because there was no elegant way to measure it by teaspoon from the grinder. But, if you take the time to do some measuring just once, you’ll be able to dispense the amount needed in any recipe, no measuring spoon required.

For the initial, somewhat tedious, measuring process, you’ll need a scale, a measuring spoon, and a couple of ramekins. The more precise your scale is, the more precise your future pepper measurements will be, but there’s no need to go crazy; 10 or so extra milligrams of pepper isn’t the end of the world. 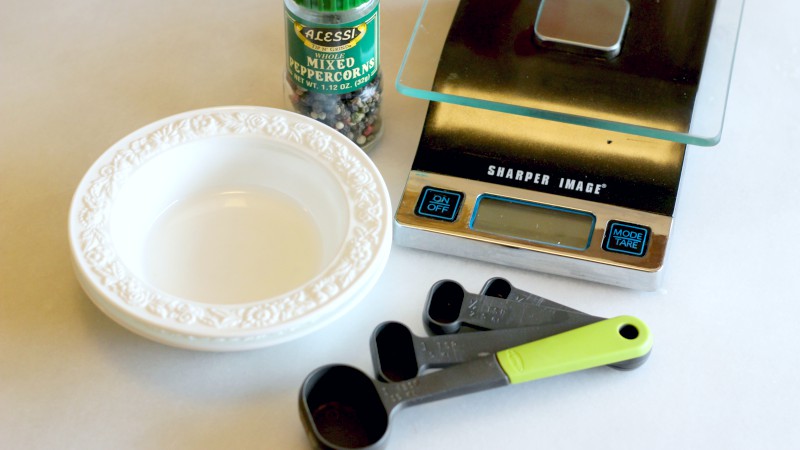 Once you have your supplies, grind out a good amount of pepper into one of the ramekins. Place another ramekin on your scale, then scoop half a teaspoon of pepper out of your supply, weigh it, and write down its mass. Your weight will vary based on the coarseness of your grinder, but it should be around a gram. (You could also just start with the assumption that half a teaspoon of pepper is about a gram, and skip this initial step, but I don’t know how precise you like to be in your kitchen.)

Next, empty out one of the ramekins, place it back on the scale, and grind more pepper into it, counting the number of turns you make on the grinder. When you hit a gram (or whatever mass you wrote down), stop counting, and write that number down. Then make a little note that says “1/2 teaspoon = X turns”, where “X” is the number of turns, and tape it either inside the door of your spice cabinet or onto the grinder itself. (For me, “X” was 35.)

The next time you need to measure fresh pepper, simply count the number of grinds, scaling up or down as needed. Of course, this method does rely on the consistency with which you operate your grinder, but it sure beats guessing, or grinding a bunch of pepper and scooping it out of a ramekin each and every time.

This is part of The Grown-Up Kitchen, Skillet’s series designed to answer your most basic culinary questions and fill in any gaps that may be missing in your home chef education.