Explained: Why Your Car Engine Loses Power Over Time

As soon as your car leaves the factory and is properly broken in, it's probably cranking out the most power it will ever make in stock form. That's because, over time, certain components wear down; here's how that happens.

For an engine to run well, it needs the right supply of fuel, proper intake and exhaust flows, good compression, and a healthy spark to set off the combustion process at the right time. Those ingredients can get compromised over time, which can lead to power loss, as Engineering Explained's Jason Fenkse describes in his video:

The video mentions 10 reasons why internal combustion motors gradually lose power, starting with a clogged air filter, which can increase the restriction in the intake system, and rob power by making the pistons work harder to suck in the charge.

On a similar note, restrictions in the exhaust system - like a carbon-clogged catalytic converter or muffler caused by a rich fuel mixture or an engine that burns oil - can increase pumping losses and sap power, too. Fenske also mentions a stretched throttle cable - which doesn't allow the throttle plate to open entirely - as a potential culprit in an engine's loss of grunt over time.

On the fuel side of things, he talks about clogged fuel injectors (dirty fuel can cause this) throwing off the air-fuel ratio, and a fuel pump that has worn down over time and can't send enough fuel at high engine speeds and loads. 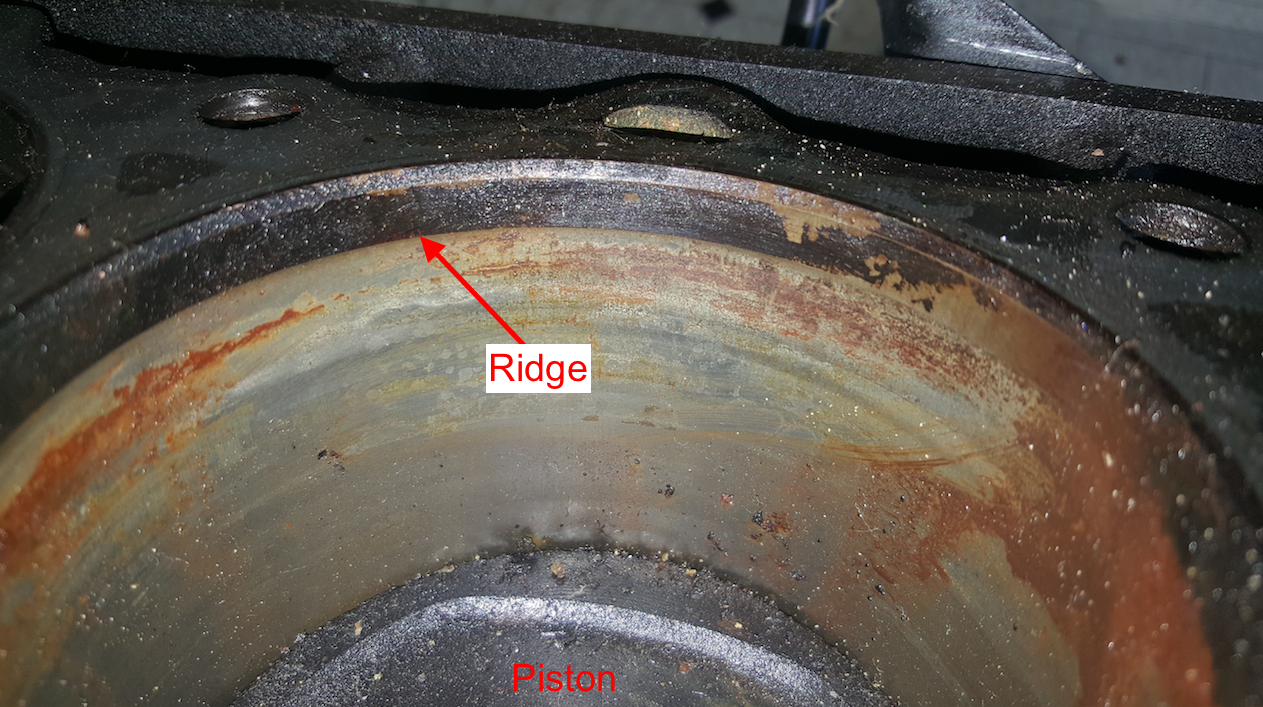 Often times, when someone talks about an engine "wearing out," they really mean it has lost compression. This can happen a number of ways, but one of the obvious culprits is cylinder wall wear, caused by piston rings gliding up and down the bore. The photo above (ignore the corrosion) shows a distinct "ridge" that represents how much the bore diameter has increased as the piston rings slid along the thin film of oil on the surface.

The larger that bore diameter, the worse the seal between the rings and the cylinder wall, meaning more blow-by, less compression, more oil from the crankcase entering the combustion chamber, and ultimately, less horsepower.

Another way an engine can lose compression is via poor valve sealing. This can happen over time as carbon deposits - which, as Fenkse mentions, can stem from oil from the crankcase ventilation system - compromise the sealing surface between the valve and the valve seat, as I explain in the clip above.

The final reasons Fenske mentions for a loss of power have to do with fouled or otherwise degraded spark plugs and carbon deposits on the pistons, which can lead to hot-spots that cause knock, for which the engine compensates by retarding timing, ultimately reducing output.

Obviously, there are a few things he doesn't mention. Especially on older cars, you have to worry about ignition component wear in things like the points, distributor cap and rotor, and you've got to worry about the timing getting out of whack. Then there's degradation of rubber seals (like valve seals), which can cause the engine to burn oil and make less power. And there's also the possibility of sludge buildup, which can lead to additional engine friction.

Really, your engine is constantly searching for ways to make less power, so keep up your maintenance - change your plugs, wires, fluids and filters - and make that motor work like it promised you it would.

This article originally appeared on Jalopnik.