The Switch To Outdoor LED Lighting Has Completely Backfired

To reduce energy consumption, many jurisdictions around the world are transitioning to outdoor LED lighting. But as new research shows, this solid-state solution hasn’t yielded the expected energy savings, and potentially worse, it’s resulted in more light pollution than ever before.

Using satellite-based sensors, an international team of scientists sought to understand if our planet’s surface is getting brighter or darker at night, and to determine if LEDs are saving energy at the global scale. With the introduction of solid-state lighting – such as LEDs, OLEDs and PLEDs – it was thought (and hoped) that the transition to it from conventional lighting – such as electrical filaments, gas and plasma – would result in big energy savings. According to the latest research, however, the use of LEDs has resulted in a “rebound” effect whereby many jurisdictions have opted to use even more light owing to the associated energy savings.

Indeed, as the new results show, the amount of outdoor lighting around the world has increased during the past several years. “As a result, the world has experienced widespread ‘loss of the night,’ with half of Europe and a quarter of North America experiencing substantially modified light-dark cycles,” write the researchers in the new study, which was published today in Scientific Advances.

This conclusion was reached after analysing high-resolution images collected by the Day-Night-Band (DNB) instrument that’s onboard the Suomi NPP weather satellite. This sensor features a spatial resolution of 750m, and can “see” light in the range of 500-900 nm (humans see in the range 400-700 nm). Traditional lamps emit some infrared that the DNB can detect, and LEDs produce a lot of blue light that the sensor cannot see. So as cities transition their outdoor lights to LED, scientists often see decreases in the light observed by satellite (which, to the human eye, would seem to have the same brightness).

“For that reason I expected that wealthy countries would appear to be getting darker (even if that wasn’t truly the case). Instead, we observed wealthy countries staying constant, or in many cases increasing,” said Christopher Kyba, lead author of the study and a researcher at the GFZ German Research Centre for Geosciences, in an interview with Gizmodo. “That means that even though some cities are saving energy by switching to LEDs, other places are getting brighter by installing new or brighter lamps (that need new energy). So the data aren’t consistent with the hypothesis that on the global scale, LEDs are saving energy for outdoor lighting applications.” 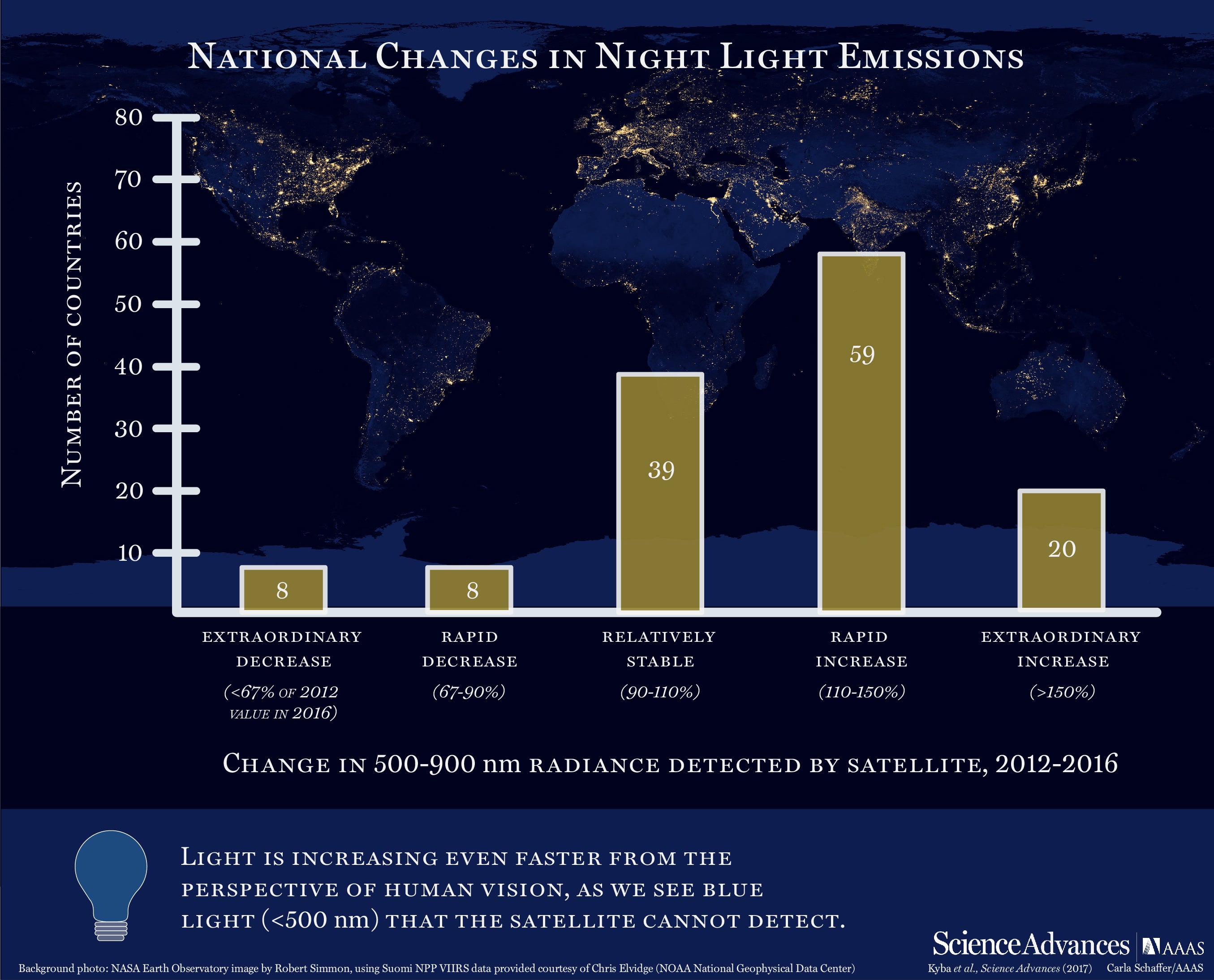 Researchers have been documenting the steady growth of artificial lighting ever since it was invented, and they have been wondering when the trend might stop. During the second half of the 20th century, electric light grew at an estimated rate of three to six per cent per year. According to the new study, Earth’s artificially lit outdoor areas grew by 2.2 per cent each year from 2012 to 2015, with a total radiance growth of 1.8 per cent each year. During this span, nearly 60 countries experienced rapid increases in nighttime illumination between 110 to 150 per cent, while another 20 countries experienced growth rates as high as 150 per cent or more. Nearly 40 remained stable, with only 16 countries experiencing decreasing rates of nighttime illumination.

And as Kyba pointed out, these rates weren’t consistent around the globe. In developed nations such as the United States and Spain, illumination rates remained stable, but most nations in South America, Africa and Asia experienced growth. In war-torn countries, such as Syria and Yemen, the rates of outdoor lighting decreased. The new study shows that, when it comes to nighttime illumination, most of the world is still playing catch up to First World outdoor lighting standards.

“This study… validates… two things we have suspected: that the rate of growth of light pollution continues upward on a worldwide scale, and that the migration of outdoor lighting from older technologies to LED isn’t having the anticipated benefit in terms of global reductions in energy usage.”

“This study is important because it validates with data two things we have suspected: That the rate of growth of light pollution continues upward on a worldwide scale, and that the migration of outdoor lighting from older technologies to LED isn’t having the anticipated benefit in terms of global reductions in energy usage,” John Barentine, the resident physical scientist for the International Dark-Sky Association, told Gizmodo. “The latter point is especially important because a number of governments have been convinced to convert their outdoor lighting to LED on the basis of promised reductions in energy usage.”

Barentine, who wasn’t involved in the new study, says the cost savings from the improved energy efficiency of LED lighting has been directed towards the deployment of more lighting, and with important environmental consequences both in terms of light pollution and carbon emissions.

Satellite images of Calgary, Alberta, taken from the ISS in 2010 and 2015. Many areas on the outskirts are newly lit compared to 2010, and many neighbourhoods have switched from orange sodium lamps to white LED lamps. (Image: Earth Science and Remote Sensing Unit, NASA Johnson Space Center)

“It’s not hyperbole to describe the global problem of light pollution as both unprecedented and astounding,” he said. “Beyond the energy issue, the main environmental impact of artificial light at night is on the health and wellbeing of practically every organism on Earth, including humans.”

Nighttime illumination is considered a serious environmental pollutant, one that’s disruptive to nocturnal animals, plants and microorganisms. But it’s also bad for human health as it disrupts the biological circadian rhythm, leading to metabolic disorders.

University of Exeter community ecologist Thomas Davies, who is not affiliated with the new study, says it’s no secret that artificial light at night is a globally widespread pollutant, but estimating the rate at which it is expanding has been technically challenging.

“This research overcomes many of these technical issues, providing reliable estimates of the global rate of expansion in artificial light pollution,” Davies told Gizmodo. “The numbers are truly shocking, given that we know illuminating the nocturnal environment can have widespread ramifications for the environment and human health.”

Barentine says the solution to this problem is actually quite simple, but it will require us to gradually change our relationship with light at night.

“We could instantly reduce the problem by about half if we assured that all outdoor lighting fixtures were fully shielded, meaning that they emitted no light directly above the horizon,” he told Gizmodo. “We could then further reduce the amount of light pollution in the world if fixtures were properly designed and installed such that the light they emit was confined to the task area, and provided in no greater intensity than needed to safely illuminate the task. Lastly, we could reduce the biological harm of our lights by ensuring that they emit as little short-wavelength (blue) light as possible, by choosing ‘warmer’ lamps.”

The most effective way to bring about these changes is through public policy, says Barentine, so we should encourage the encoding of these principles into local, regional and national laws throughout the world.

These solutions sound simple, and they’re certainly sensible, but it’s rather convenient for those of us in the developed world to impose such lofty standards onto places where nighttime light is being used for the very first time. Sure, we need to change the culture around the use of outdoor light, but let’s start this conversation in places where we already take nighttime illumination for granted.