Apple has AirDrop for quick and easy file sharing between iPhones and other Apple devices. Now Google is bringing a similar feature to Android with a new app called Files Go.

The app, which launched in beta last week, can also help clear up space on your smartphone. Here’s what you need to know about Files Go before you get started.

You can grab Google’s new app from the Play Store right now, as long as you have a device running Android 5.0 or up. The app is free to use, with no ads or in-app purchases, though Google is probably scanning all the data you share to serve better ads elsewhere online.

PhoneArena notes that the beta isn’t super stable, but the design is slick and it seems to work pretty well despite a few bugs. The only other drawback is that Google limits the storage space inside Files Go to just 6MB, at least for now.

How to Use Files Go 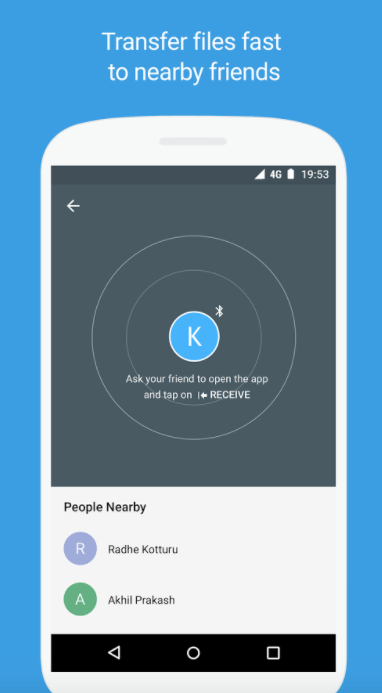 If you decide to download Files Go you’ll find that most of its features are actually focused on saving space on your smartphone. It’s built to seek out files you don’t need – rarely used apps, duplicate images and spam – so you can easily delete them. It also offers built-in search for quickly finding the photos, videos and documents you actually care about.

If you want to use Files Go to share a picture or document with someone else, just go to the Files tab and tap the Send button. You’ll see a list of people nearby, but for the app to work, they will need to have Files Go installed themselves, then open the app and hit Receive. That creates a Bluetooth connection (which Google claims is secure) for you to quickly share files.

Using Files Go is a bit more complicated than Apple’s AirDrop, which doesn’t require you to download any extra apps or open anything on your phone to receive a file – but that isn’t necessarily a negative. AirDrop’s open system has been used for harassment in the past, so plenty of users will likely have no problem with the fact that Google’s version has a few extra barriers in place.