A while back I decided my apartment looked like a teenager lived there. Video games were front and centre, comic books were lying all over the place, and there were toys strewn about for no reason. So I made my place look a little more sleek, organised, and “grown up” – without sacrificing the things I loved.

We all buy things from time to time that we don't really need. It's OK to appeal to your wants every once in a while, as long as you're in control. If you struggle with clutter, impulse buys and buyer's remorse, here's how to put your mind in the right place before you even set foot in a store.

Pare Down First, If You Can 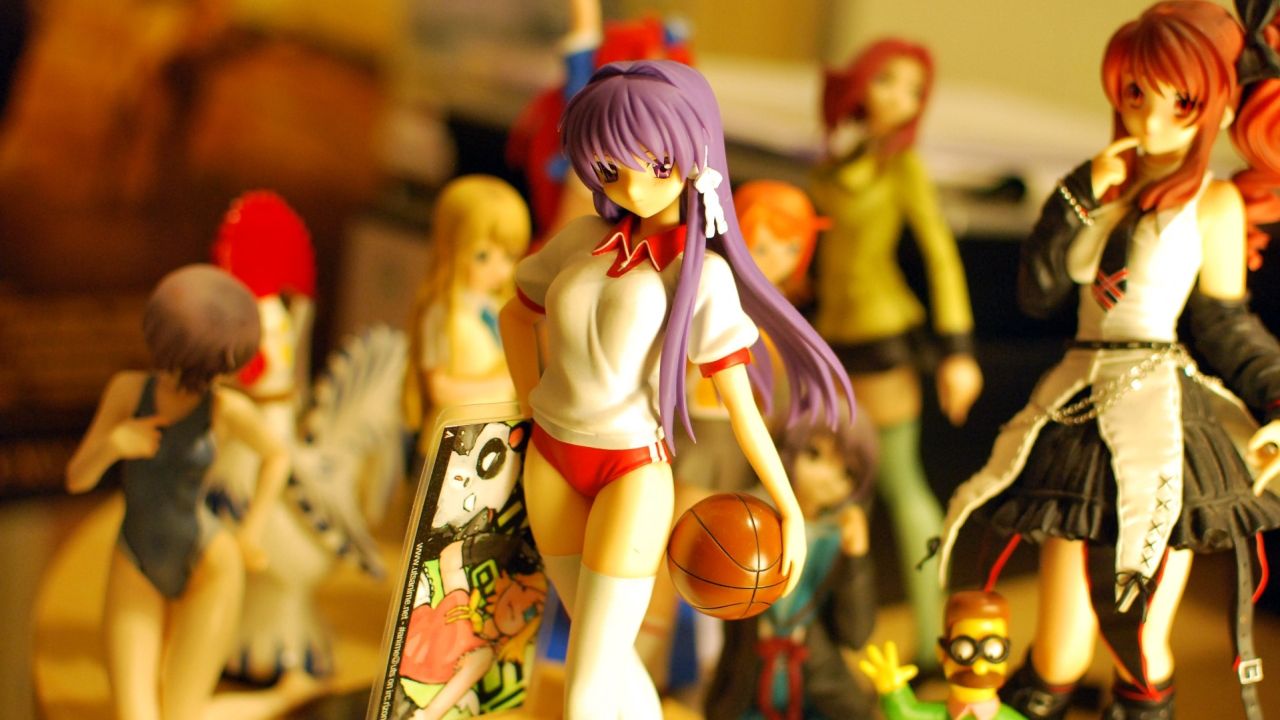 Maybe you have a few favourites? Photo by Ruben Schade.

Maybe you have a few favourites? Photo by Ruben Schade.

Now, before we get into this, please keep in mind that I’m not saying you have to get rid of or hide all of your nerd stuff in order to be considered an adult. That said, if you’re interested in making your place look a little more “geek chic” and a little less “nerd dungeon”, the first thing you should do is get rid of some things you don’t really want.

I don’t want to get too Marie Kondo on you here, but if you have a bunch of toys, posters, figures, and other stuff that doesn’t truly bring you joy in some way, get rid of it (sell it, give it away, and so on). It’s all taking up space and will make organising it all harder later on. Maybe you only really want a couple of those movie posters and the rest just kind of accumulated somehow. Or maybe just keep your favourite toy of that character you love instead of the entire collection. Let go of all your “nerd cred” here and focus on keeping the things that actually make you happy.

Put Only a Few Exceptional Items On Proper Display 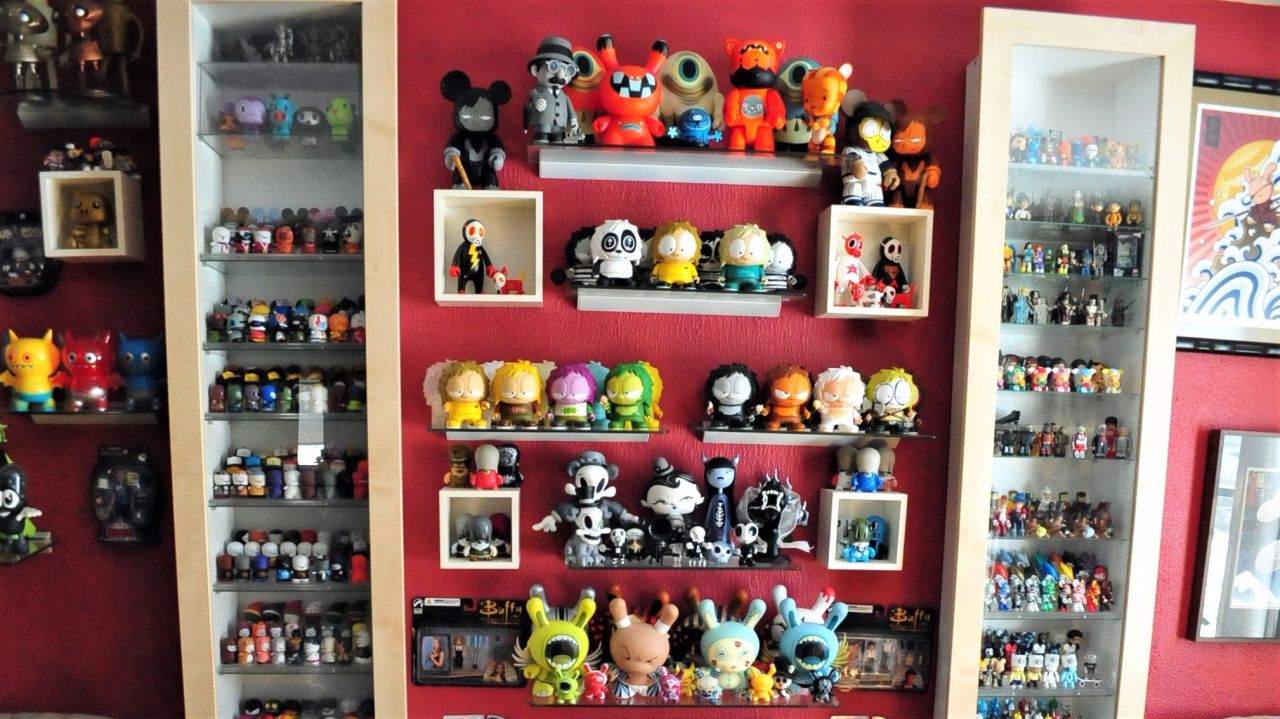 This is… a lot. Maybe too much. Image via State Farm.

This is… a lot. Maybe too much. Image via State Farm.

Part of having a “grown up” looking home is keeping it organised and somewhat easy to clean. So, once you’ve pared down and have a few less things to work with, be very select with what you put on display. Display the really cool stuff, and pack away the rest. Remember, the less you have out for people to see, the more focus there will be drawn on those things anyway. Too much stuff just means the items you truly love get lost in the swarm.

And if you’re going to display something, do it right. Get a nice display case for those collectible figurines, frame your movie posters, and organise your graphic novels on a nice bookshelf. Part of making a place seem more mature is about showing you can take great care of your things. So, if your geeky stuff means so much to you that you absolutely must display it to everyone, you should do it right and show how much you care about it.

Go Digital With Your Comics and Manga 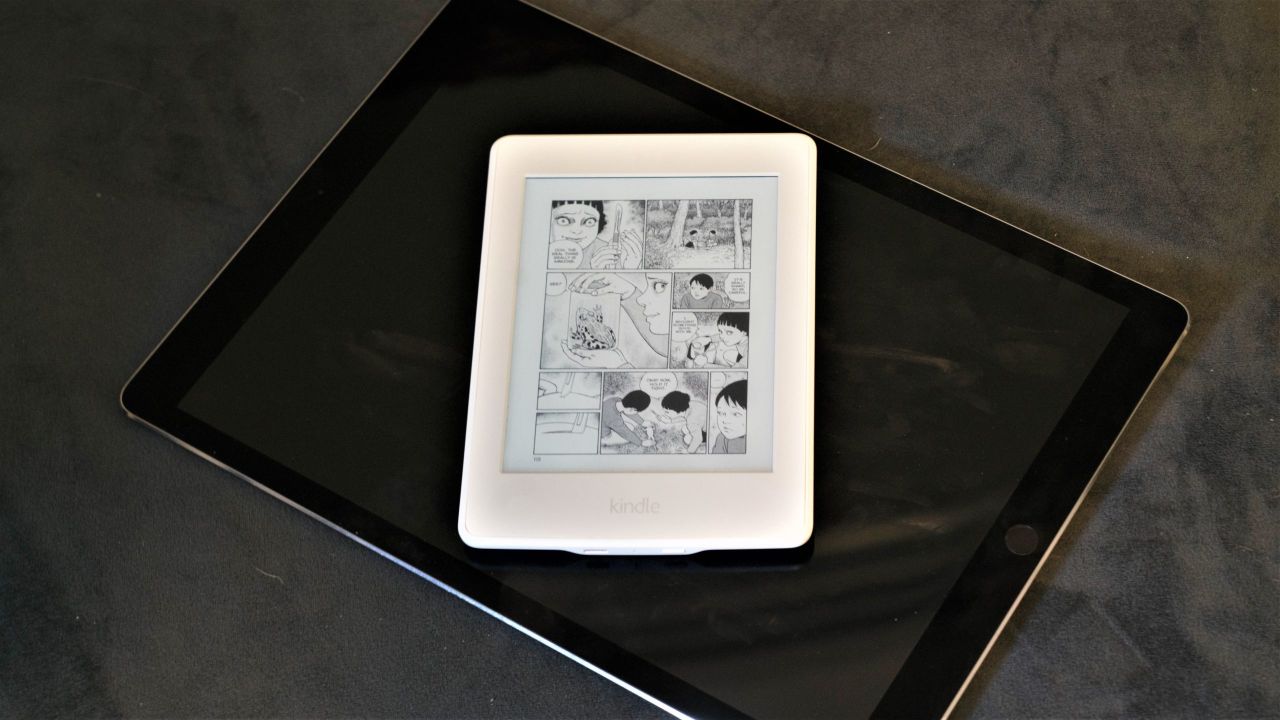 It’s so much easier…

It’s so much easier…

Comics and manga can take up a ton of space, and let’s face it, they just scream “nerd alert!” This is especially true when you have a whole wall dedicated to them. Again, if that’s the aesthetic you want, there’s no need to change! Me? I don’t like to wear my hobbies on my sleeve and I didn’t want to get pigeonholed as a “comics guy” or a “manga guy” by every person that walked in my door. That might sound insecure, but I wanted people to ask me what I’m into, not make a snap judgement from a single glance. So, I went digital with everything.

Now, I love the feel of comic books, but unless I feel like an issue is going to be a special collectable in some way down the line, I just read it on a tablet. Same goes for manga. I don’t read a lot of them, but I buy most of my manga for my Kindle Paperwhite (which is actually pretty great for it). I still have a place where I keep all my collectable comics and whatnot, but they’re safe and stored away. It isn’t like I’m going to take them out of their sleeves and read them again anyway. 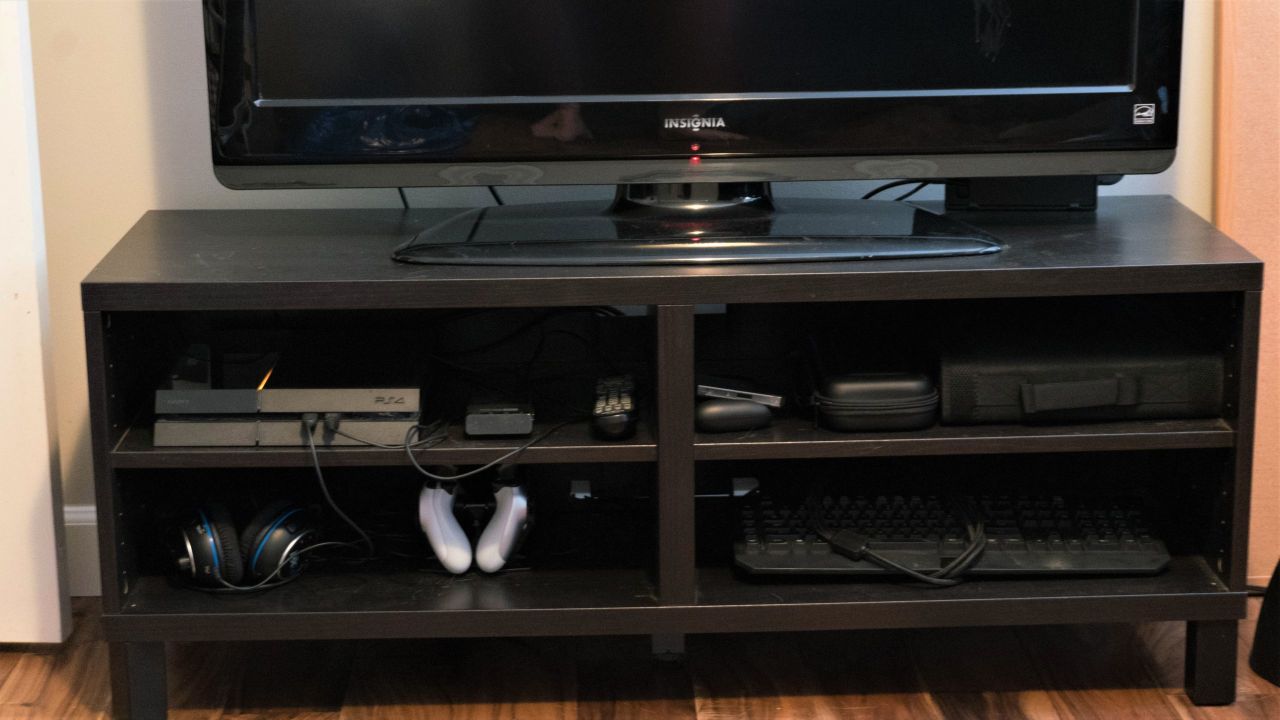 This might seem like blasphemy to some, but I rarely keep movie or game boxes any more. They take up a ton of space and, unless you’re a collector, there’s no reason to keep them. Besides, they don’t make cool instruction booklets any more anyway. So why keep them?

Buy one of those massive CD binders and keep all your games and movies in there. They keep things organised, they look nice, and nobody needs to know that you own hundreds of games unless you want them to. Remember, the goal here isn’t to lie about your hobbies (I don’t, ask my girlfriend). It’s about having more control over the aesthetic of your place. I want my entertainment centre to look sleek and clean, but I can’t achieve that if I have dozens of game cases lying around.

Declutter Your Entire Home With This 8-Week Plan

Few of us have the time or energy to declutter our entire home in one go, but in 30 minutes or less every day over a month and a half? It just might be possible. This plan can help. 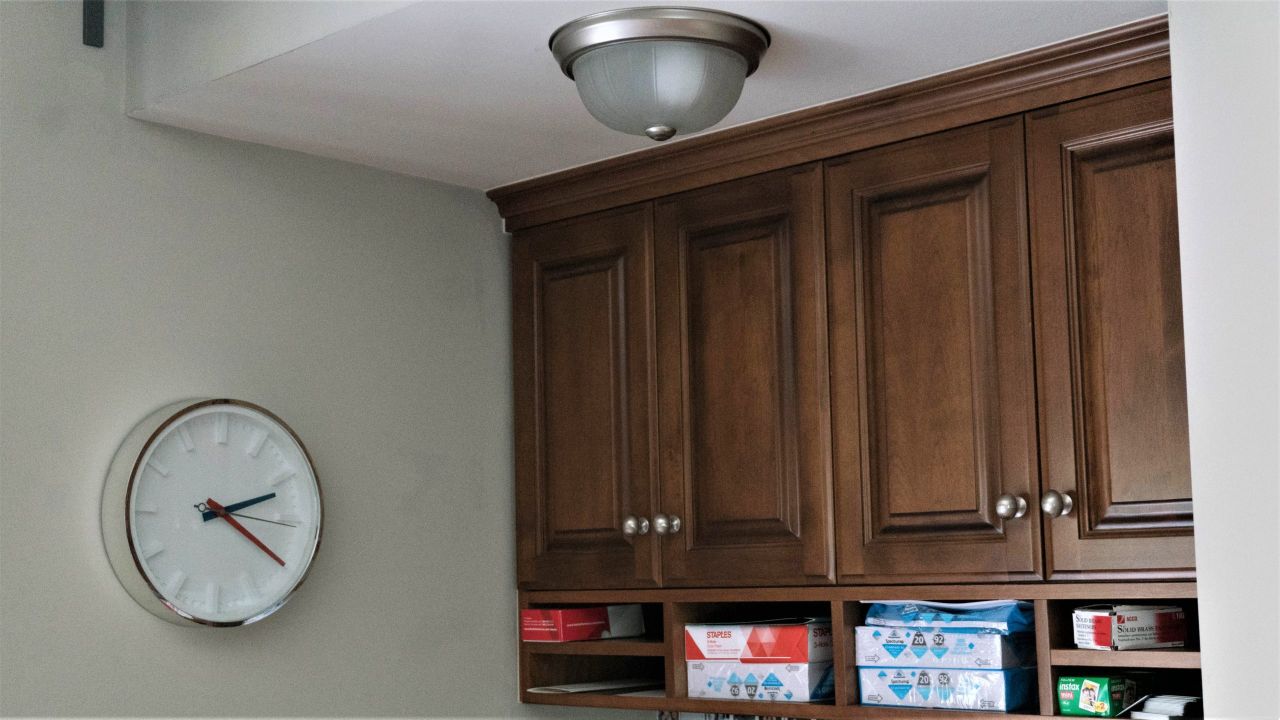 What’s in here, you ask? Games!

What’s in here, you ask? Games!

Did you know cabinets make great storage space? Use them. If you don’t have any, get some cheap ones at IKEA, and use those. They’re the easiest way to hold onto all your cool nerd gear and not have it all out to see, acting like a geeky lighthouse that may or may not attract ships on the endless sea.

Say, for example, you have a substantial board game collection. Me too. They’re great. I keep them all in a nice-looking cabinet dedicated to those types of games. They’re organised well, they don’t get dusty, and, again, nobody knows I have every Arkham Horror expansion unless I choose to show them. Plus, nothing wows other board game enthusiasts like swinging open your cabinet doors with a flourish to reveal an awesome selection for game night. Come on, people. Have some theatricality.

Don’t Give Up Anything You Don’t Want to 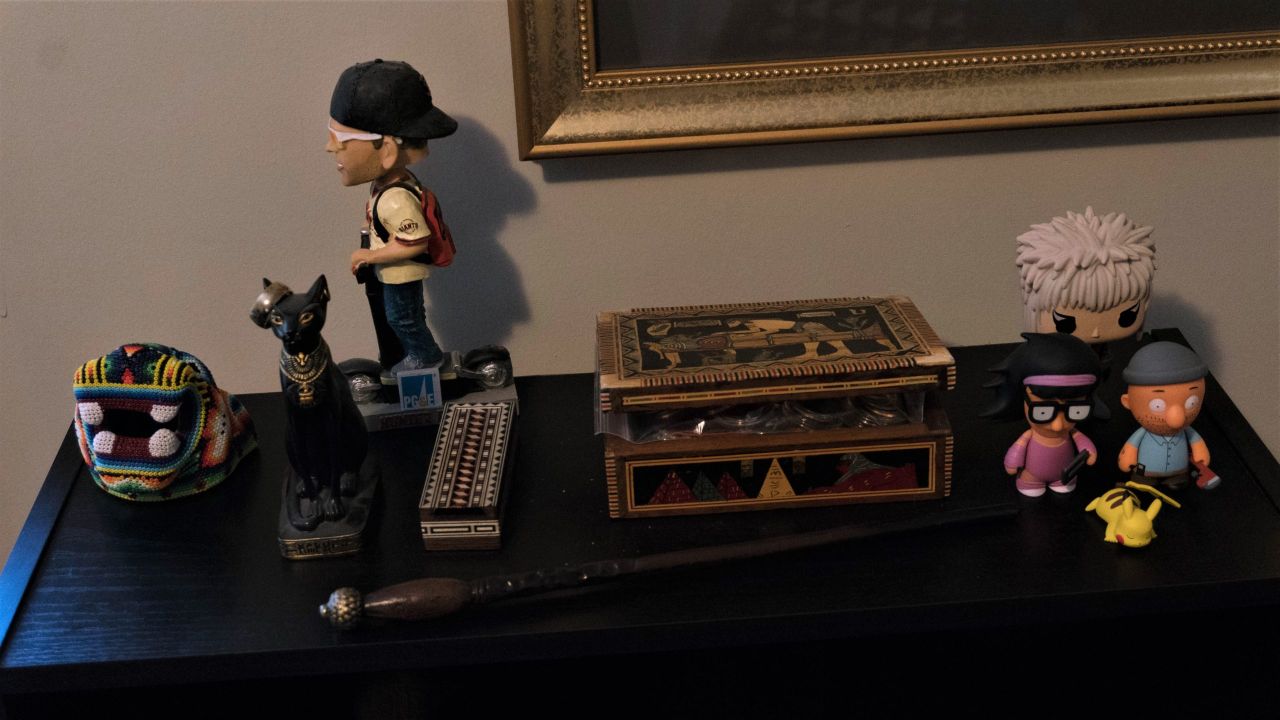 What? I can’t give up this stuff…

What? I can’t give up this stuff…

Don’t get me wrong – I’m a huge nerd, and I love nerdy things. But I felt there was more to me than the geeky things I had on display, and I wanted to show it. Plus, dating can sometimes get more awkward when your place is drowning in the kind of stuff you might find in a Loot Crate box. So I changed things.

These tips worked for me and the look I wanted to achieve, but you may differ, and that’s totally OK! Don’t change your likes or style just because someone else tells you to. But if you feel the way I felt, and think your place is starting to look a little less “grown up” for your tastes, give these suggestions a try. And if you have any suggestions of your own, share them in the comments below!