How To Keep A Woolies Orchid Alive, Or Get It To Bloom Again

I’ve seen some crazy things in my time: A man peeing into a public postbox in the city in the middle of the day while pedestrians pretend not to notice; a train forced to reverse course and creep backwards into the previous station while the conductor and motorman loudly panic in front of the passengers; three Rolls Royces casually street parked with no fear of being keyed. But the craziest thing I have ever seen is fancy florists offering simple white moth orchids for $110 each.

Why would anyone spend that much money when you can get the exact same plant at Woolworths for $25 and pick up milk while you’re there? But spend they do, or the florists wouldn’t sell them at so high of a markup. There are people who will tell you that the flowers on expensive orchids somehow last longer, or that expensive orchids will bloom again while their cheaper cousins will never grow another stalk of flowers. I am here to tell you that the only real difference between what you get at that high end florist and Woolies is the fancy pot the florist variety comes in.

The only real difference between what you get at that high end florist and Woolies is the fancy pot the florist variety comes in.

So go ahead, buy the grocery store flower and enjoy regular yearly fresh blooms. Put it in an extra fancy pot if the mood strikes you.

While not meant as a comprehensive guide to growing an orchid, here is what has worked for me and my $25 plant.

Your orchid’s beautiful flowers will probably last between one to three months before they start to wilt and the stem dries out. When all the flowers have wilted, it’s time to cut the stem so a new one can grow. Get a pair of very clean scissors and cut the stem off around 2.5cm from the base. I leave about one node – that’s the little bumpy line on the stem – at the bottom. Some people like to cut it right at the base, others leave two nodes – I compromise. Either way, the tiny remainder of stem will dry out before the new one grows in.

Chances are the TJ’s orchid came in a tiny terracotta pot with an even smaller plastic pot inside it. If you remove the plastic pot, you’ll likely see the roots of the orchid pressed against the sides, trying to find new areas to expand into at the top of the pot.

After the orchid is finished flowering is an excellent time to re-pot it. Get a pot with a drainage hole that is several centimetres larger than the one it came in. Buy a bag of orchid potting mix. You can get the moss variety, which is what Woolworths orchids tend to be planted in at the store, or you can get orchid bark, which despite its name is actually a mix of tree barks and charcoal. Personally, I prefer orchid bark, but either one works well.

Be careful not to tear roots.

Gently remove the plant from its pot and try to pull away the moss or other planting materials that are around the roots. Try not to disturb the roots; it’s better to leave some clinging moss than to tear a root. If you see any dead and shrivelled roots, you can cut them away with a pair of scissors before replanting.

Pour some of your fresh orchid potting medium into the pot, gently place the roots inside, and cover with more potting material. You do not want to tightly pack an orchid into a pot as you want the roots to have some breathing room. 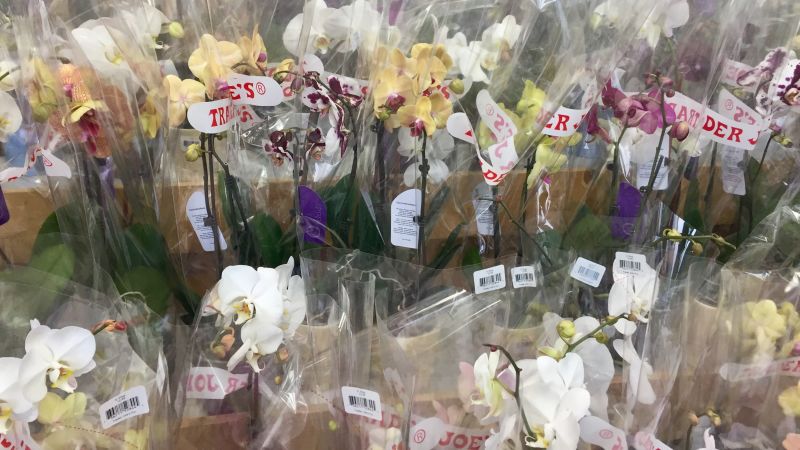 There are any number of commercial orchid fertilisers on the market, so take your pick. Right after replanting and after the flowers have died away is a good time to start feeding your plant so it has the nutrients to bloom again. I prefer a water soluble fertiliser so I can fertilise when I water.

The orchid will first grow one or two new leaves, taking advantage of its flowerless state to ensure it has enough fresh green leaves to sustain itself, so be patient when waiting for a new flower stem to emerge. Eventually, after the new leaves have grown in, the stem will start to poke out. As it gets longer, be sure to tie it gently to a stake you stick into the pot. You can save the bamboo stake and ties your orchid came with and use them again. Try to tie the stem to the stake before the flowers start coming in.

4. Give the Plant Regular Care

Keep the orchid in a spot that gets a lot of light but is out of direct sunlight. I keep mine on a little plant stand that is just to the side of an extra-sunny window to avoid burning the leaves. If the orchid isn’t getting enough light, it may not put out a new flower stem.

When it comes to orchids, it’s better to forget to water than to water too much. The roots can easily rot from being wet too often, which will eventually kill the plant. So try to allow the planting material to dry completely between waterings. The large moth orchids sold at Woolworths in particular like to dry out a little between waterings.

It’s better to forget to water than to water too much.

While it will depend on how humid your home environment is, watering once a week to once every two weeks should be enough. I like to take my orchid over to the sink, pour a generous amount of water over it, and wait until all the excess drains out of the pot, so the orchid is never sitting in standing water. Orchid bark planting mix dries out faster than moss potting mix, so if you tend to over-water plants because everyone knows food is love, bark might be the right medium for you. If you forget to water, moss may be a better choice.

Orchids like humid homes, so if yours is dry, especially in the summer when the air conditioner is on all the time, you can mist the orchid gently every couple of days. Don’t spray it in order to get it wet, but just mist in its general direction to create a moist little cloud of dew around it.