Hands On With the Netgear Orbi Networking System

Netgear has long been a significant player in the networking business. The Orbi is their play in the competitive world of mesh networking, that uses multiple wireless devices that interoperate to cover a large area with a single WLAN.Netgear sent me me three different Orbi systems to try out. I’ve reviewed their premium system, the AC3000 system, which is designed to cover up to 350 square metres of area.

Like the TP-Link Deco and Linksys Velop, the Orbi requires a mobile app in order to complete the installation process. But that’s pretty much where the similarities end.

I didn’t need to create an account with Netgear in order to set the Orbi up. And unlike the Linksys and TP-Link rigs I tested, each different Orbi set comes with two components – a router and a satellite. The others come with three (although you can purchase smaller packs depending on your needs).

I followed my usual practice of setting up the Orbi with my regular SSID and password settings so I didn’t have to reconfigure all of my peripheral devices. As there were just two competes to set up – the router and satellite – I placed the two components in slightly different locations to the other sets I tested. 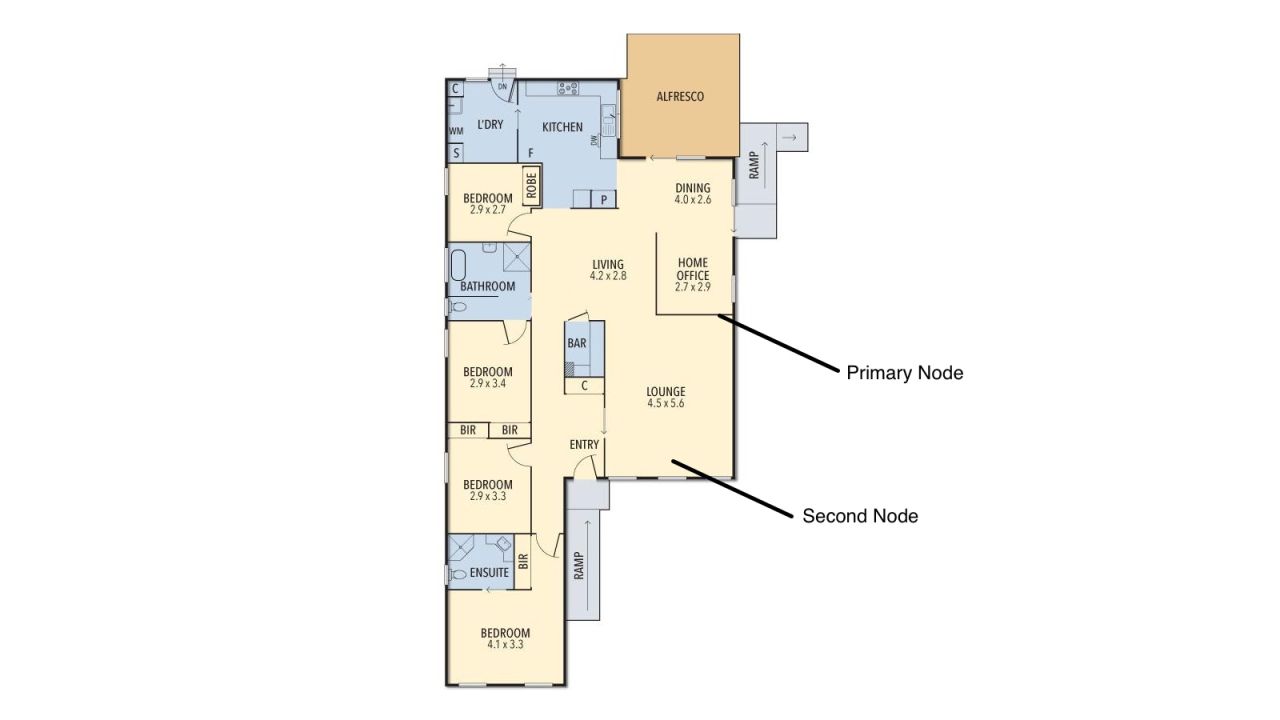 As is almost always the case, the main factor limiting where I placed the router was the location of my inbound internet connection with the satellite’s position determined, to a large degree, by where I had a spare power outlet. I described the test environment in more detail in the introduction to this series of reviews.

One of the big plusses of the Orbi over the other set I tested was that both the router and satellite make it easy to add plenty of wired devices. The router has three ethernet ports and the satellite throws in another four. That’s a big plus over the Linksys and TP-Link set ups which only offer one or two available Ethernet ports per access point. And each Orbi device also has a USB port for sharing storage or printers.

As well as the default network, Orbi lets you establish a guest network that can be toggled on and off as needed suing the app.

However, while the app makes it easy to access basic features of the Orbi system, I needed to go to my computer and access orbilogin.com and log-in with the admin username and password I created for my network during setup to access more advanced settings. Unfortunately, this is where the Orbi let itself down. And while I could get to a screen for QoS (Quality of Service), all it left me do was carry out a speed test – I couldn’t actually allocate any prioritisation of connected devices.

Also, the browser-based interface indicated that there were firmware updates available for the router and satellite. However, the app (I was using the iOS version on an iPhone 7 Plus running iOS 11.1.2) said the firmware was up to date. My Orbi system shipped with firmware version 1.12.0.18. The browser configuration software said the current version was 2.0.0.74.

But that firmware update was a good one. It added the ability to set up the Orbi network either as a Hub and Spoke or as a daisy chained set-up if you have two or more satellites in the mix.

You can create address reservations so specific devices receive the same same IP address on the network each time they connect. The process is straightforward but can only be done using a browser on a computer.

For home users keen to use parental controls to control which sites your kids access and how long they spend on the network, you’ll need to download and set up Netgear’s Circle app and configure that separately.

So, while getting the Orbi up and running with basic settings was easy, those looking for more advanced options will be disappointed.

Despite only having two nodes, the Orbi system I tested was the best performing of there three mesh systems I looked at in my environment. It was only when I was about 20 metres away, across the street that I started losing packets and seeing slower ping times. When I was in the house, almost all ping times were sub-10ms with the only outriders coming when I was outside at the extremities of my block.

Streaming with multiple devices was unhindered and i was even, because of when I was testing the Orbi, able to host a webinar while one of the kids, who was home from school, was watching Netflix via an Apple TV while other family members were on their laptops in other rooms.

Being able to connect multiple wired devices was also handy. It meant I could easily connect my Sonos controller and a media streamer to the satellite Orbi as well as a NAS to the router in the office. Other devices such as tablets and smartphones connected without a hitch. However, determining whether a device was connecting over 5GHz or 2.4GHz could only be seen using the browser and not the mobile app.

Pausing devices connected to the network was easy using the app – a good way to get the kids to move if you call them and they aren’t responding while on their devices. You can also set blocking rules but, again, that’s a browser function.

Netgear has put together a really impressive piece of hardware that, I feel, is let down by the mobile app. I’d prefer there to either be an app or the browser or that all functions were available universally. Having some stuff in the app is a pain. And until you work out something isn’t in the app, you don’t know of you need to go to the browser.

Parental controls are available via the browser with an instruction to install the Circle app. But, after doing that and asking the app to find my Orbi set up, it reported that i didn’t have a Circle-compatible Netgear device. Some further research found that the Orbi will be supported “soon”. So why it’s in the software now is a frustrating mystery.

Edit: I’ve just found that my printer, a Fuji Xerox DocuPrint CM315z, isn’t able to connect to the Orbi network. It only uses a 2.4GHz radio and, it seems, the Orbi isn’t playing nicely with it. I’ve connected it via a cable so it’s not a big deal but thought it worth mention.

And that, I think, is the story of the Orbi. It’s great hardware let down by some less than great software.

From a purely hardware persecutive, the Orbi is a great product. I’d rate the accompanying software at somewhere between fair and poor but at least that’s a problem Netgear can fix.