Dick Moves For Winning Board Games

Board games are a safe place to play out conflicts with your family and friends, with the understanding that once the game is over, everyone is on good terms again. That also makes them the perfect place to take out all your petty frustrations and revenge fantasies, under the guise of good fun. Here’s how to destroy your opponents with dick moves that will feel like cheats, but are all sanctioned by the rule book.

People always think that all book nerds love Scrabble. Some of us don’t! Scrabble isn’t really about words; it’s just about combinations of letters. If you’re a Scrabble hater forced into a game, get back with these stingy strategies.

Most Scrabble strategies involve maximizing your point total. But it’s also important to minimise your opponent’s point total. Don’t leave them any opening to build onto a double- or triple-word square. Eventually they will be forced to give you an opening; always take it, even if you can only make a mediocre word. (I learned this strategy by playing Words With Friends against a Republican.)

In most games, someone eventually “opens the board up” by laying out a long branch that everyone can build off. That person is a loser. Take advantage of their generosity, but don’t give back. Memorise two-letter words so you can build parallel words that clog up the board instead of branching out.

And if you’re really devious, and willing to risk it, play a fake word. This is a legal move! If an opponent challenges you, you’ll lose points. But if they challenge you and the word is in the Scrabble dictionary, they lose their turn. So build up a fear of that risk. It’s useful to play a couple of obscure words before you play your fake one.

Try to make a word that feels real. It keeps your opponent wary about challenging. Even if they know that you made up the word, it might still be real. And that would still count in your favour. The rules don’t say you have to know a word’s definition, or even that it exists. And once the next player takes a turn, yours can no longer be challenged.

Most online versions of Scrabble won’t let you play fake words. That’s fine; half the fun of faking a word is watching everyone else sweat, which can only be done in person.

Like Scrabble, chess isn’t just strategy, it’s memorization: How many checkmate patterns can you recognise, and can you force your opponent into one before they force you?

Humiliate a beginner with a fast checkmate

Win in two moves with the Fool’s Mate. This only works in specific openings, against an inexperienced player, when you go second. If White moves up the pawns in front of their king’s bishop and knight, Black can send their queen over for a quick checkmate. 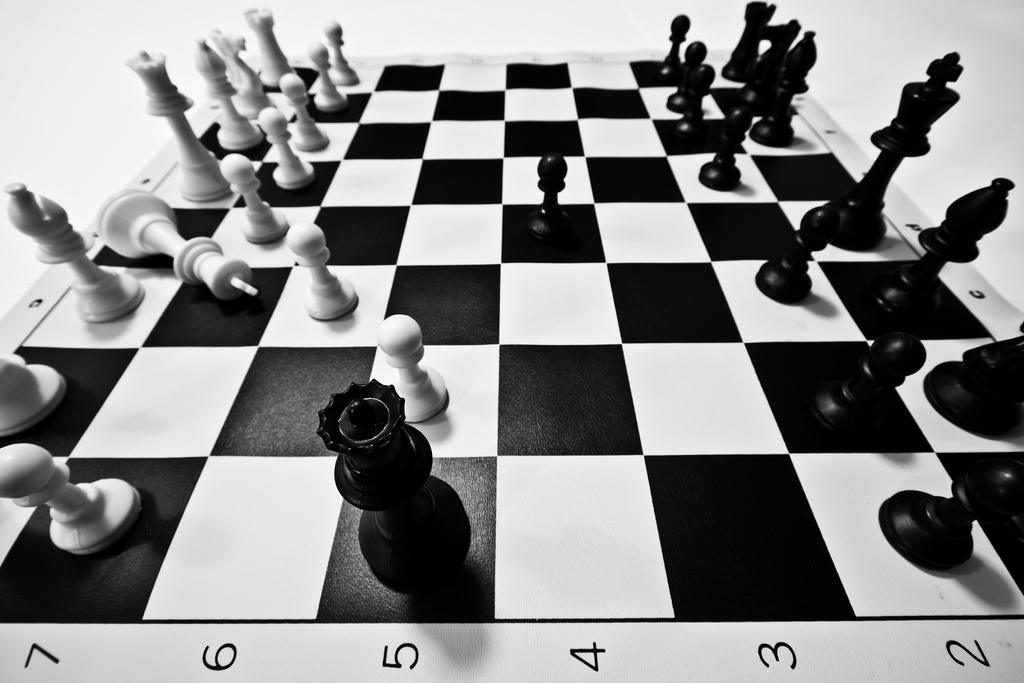 The slightly less obvious Scholar’s Mate delivers the game in four moves with the queen and bishop; with the right victim, From’s Gambit can deliver it in five. And in the Légal Trap, White lures in Black with a queen sacrifice before making an early checkmate. Supposedly, its inventor baited the trap (and covered up for a possible escape) with a face-to-face bluff:

Légal disguised his trap with a psychological trick: he first touched the knight on f3 and then retreated his hand as if realising only now that the knight was pinned. Then, after his opponent reminded him of the touch-move rule, he played Nxe5, and the opponent grabbed the queen without thinking twice.

The Monopoly end-game is stressful. But not stressful enough. Add some pain with a housing crisis and a post-jail penalty.

When the Monopoly bank runs out of money, you’re allowed to make more, or keep track of money with a ledger. But when you run out of houses, that’s it — no one gets to build any more. Housing is supposed to be limited, according to the rules.

So when houses are running low, build as many as you can, and don’t convert them into hotels. Once they run out, your opponents can’t buy more houses — and no matter how much money they have, they can’t skip straight to hotels, because technically, hotels can only be built on properties that already have houses.

Buy up the post-jail spaces

According to this Monopoly heat map, players are especially likely to land on the row of spaces following the jail square. So buy up those magentas and oranges.

While jail isn’t the only factor in which properties are most profitable, it’s an easy strategy to remember, and one that hits opponents when they’re down — right after they have paid a fine to get out, or after they have hung out in there intentionally to avoid paying rents, and missed out on property-buying opportunities.

Catan provides plenty of opportunities to punish your fellow players, whether stealing their resources with the robber or blocking their expansion with a road. But if you bug your opponents too much, they can retaliate. Here are some high-impact dick moves.

Block a road in the middle

You can chop up another player’s road with a settlement, breaking it into two smaller roads and potentially making it ineligible for the “longest road” bonus. Even though this is covered in the rules, players regularly ask about it on the /r/catan subreddit. 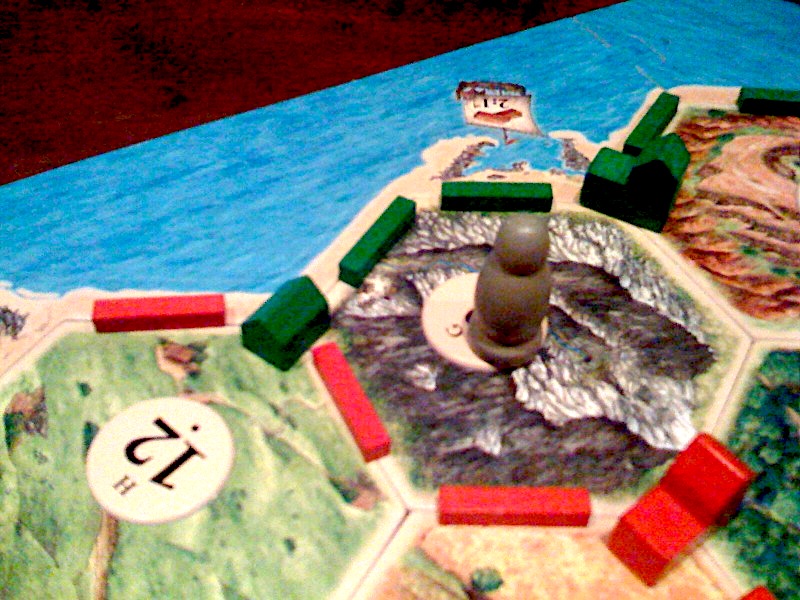 Before you play the monopoly card, and take all of a specific resource, trade away some of that resource, since you’re about to get it all back.

If you’re not sure who has what resources, you can just ask. Simply pretend you’re asking for a trade: “Got any brick for wheat?” And when they say yes, play your monopoly card and grab their brick. That is, if they haven’t lied.

If you can, use the robber against the player to your right. If you hit a hex that only they benefit from, the robber will sit there all round. When their turn finally comes, if they get revenge, you’ll be able to respond immediately.

Build your strategy around bugging your enemies

Follow the Developer strategy in this Catan guide on Instructables. Focus on development cards, throw the robber at your opponents, and look weak despite your slowly growing power. Don’t worry about collecting wood or brick. 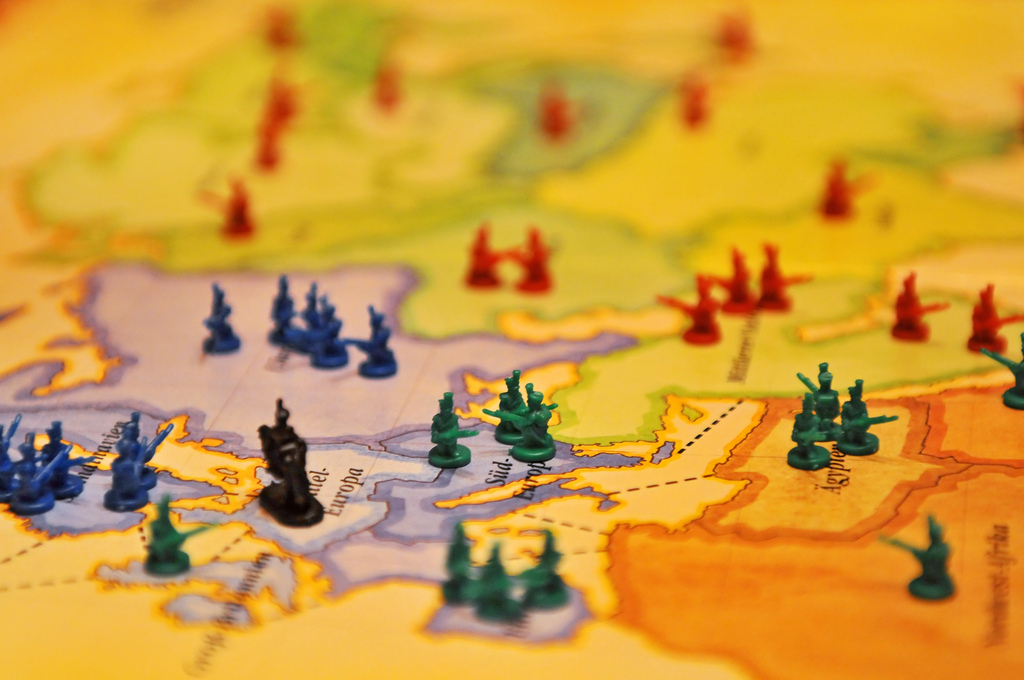 A spectre is haunting Europe, and it’s you. (Photo by Tambako the Jaguar)

A spectre is haunting Europe, and it’s you. (Photo by Tambako the Jaguar)

If Monopoly is too relaxing, try a plodding campaign of Risk. It’s got enough strategy to frustrate beginners, but enough chance to infuriate good players trying to finally end the damn game. As with Monopoly, your game ends with either a slow march toward death, or an unsatisfying surrender.

Feint toward an ally

Don’t immediately build up forces on the border that faces your next target. First build up near someone you could intimidate, but don’t actually want to invade. Then cut a deal with them, and move your armies over to ambush your actual enemy. If you play this right, you’ll be two steps ahead: Your enemy won’t be ready for you, and your new ally will owe you something just for doing what you secretly planned to do already.

Make others do your dirty work

Occupying an entire continent provides a hefty bonus, but only if the player maintains that hold for an entire round. Ideally, another player should break that hold right before the player’s next turn. But you don’t want to be that player — you’ll have to sink resources into the fight, and the other player will definitely retaliate.

Instead, you need to impress upon your fellow players the importance of stopping the continental monopoly. Avoid getting near that continent, so you have an excuse for not helping. Promise to help out whoever breaks the monopoly. Anything to make them waste their resources instead of your own — and to maintain the possibility of a future truce with your enemy.

Australia is the easiest continent to take over in the early game, but it’s very hard to expand from, and its bonus is pitiful. If you can grab a bit of Australia early on, and pretend you care about it, you can “give it away” in exchange for something more valuable. Be careful: This takes some careful negotiation, and other experienced players won’t fall for it.

If you want a game built entirely around devious strategies, try some of these: