The newly-unveiled Pixel Buds promise to be the ultimate travel companion. In addition to putting your music and all the power of Google in reach at all times, they offer instant vocal translations straight into your ear – just like a real-life Babel fish.

Unveiled at the Made By Google event in San Francisco, the $249 earbuds don’t yet have an Australian release date but are expected to be available by the end of the year. They’re part of a slew of new Google-made hardware including the Pixel 2 smartphones, a Pixelbook laptop, new Google Home speakers and the Clips camera.

The Pixel Buds work as standard Bluetooth 4.0 earbuds with any device, supporting AAC and A2DP along with hands-free calling. They feature two built-in microphones and touching the right earbud allows wearers with Android handsets to speak to Google Assistant on their phone, without needing to preface every request with “Okay, Google”.

Unlike Apple’s AirPods, the Pixel Buds are linked with a cable, which makes them harder to lose and lets users wear them around their neck when not listening to music.

The Pixel Buds are comfortable to wear for extended periods because they don’t reach far into the ear canal to make a tight seal. Instead the earbuds are held firmly in place thanks to a small adjustable loop in the cable which joins the earbuds.

Everything You Need To Know About The Google Pixel 2 Event

Early this morning, Google pulled back the curtain on a suite of new products at their event in San Francisco including the Pixel 2 and Pixel 2 XL, new Google Home products, a 2-in-1 notebook and earbuds. If you were peacefully sleeping during the announcements - I don't blame you - and you can read about all the new products coming to Australia, right here.

Located at the back of each earbud, the cable loop presses against the inside of the ear to prevent the earbud from dislodging. The design allows wearers to quickly and easily customise the fit without the need for Google to provide differently sized interchangeable outer sheathes.

This design also ensures wearers can still hear ambient noise while offering surprisingly rich sound quality with reasonable bass, similar to wearing open-backed headphones. This makes the Buds safer to wear while walking down the street, but it will frustrate music lovers who want to drown out the background noise during their daily commute.

Wearers can tap the right earbud to pause their music, as well as swipe back and forward to adjust the volume and speak previous/next commands. They can also press and hold the earbud to speak to Google Assistant on their phone, with no lag before the user can start speaking.

The ability to hear ambient sound also makes it easier to try out one of the features Google was keen to highlight: integration with Google Translate. The app already lets you translate spoken and written words to dozens of languages, but when using the Buds and your phone in conjunction you can have a conversation with someone speaking a foreign language in real time. Forty translation languages are supported, although this only works with Google’s Pixel smartphones. This limitation is due to the need for the translate app to route some audio through the earbuds and some through the handset’s speaker. 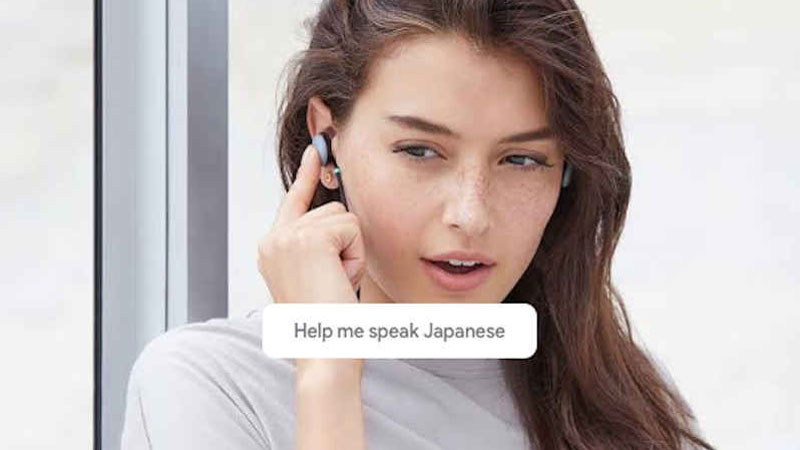 Translations are activated by tapping on the right earbud, followed by a spoken request such as “Help me speak Spanish”. This launches the Google Translate app on the wearer’s Pixel smartphone, using the phone’s microphone to listen to the Spanish speaker and translate their speech into the wearer’s native language.

Translations are performed within seconds, handled by the Pixel handset and spoken into the earbuds as well as displayed on the screen.

The wearer’s response is then translated into Spanish and spoken aloud by their phone as well as displayed on the screen. The feature can also be used to listen to public announcements in foreign languages, although Google says it is optimised for one-on-one conversations.

The earbuds offer a 5-hour battery life and come with a carry case which doubles as a USB-C charger. The case also features a built-in battery, holding enough power to recharge the earbuds four times.