Hello friends, and welcome back to Will It Sous Vide?, the column where I usually make whatever you want me to with my immersion circulator. Today we’re sous vide-ing an iconic, spicy and saucy little number: the famed chicken wing.

If our last topic-picking session taught me anything, it’s that you guys were not unified on the topic of sous-vide wings. Some of you raved about them, some of you were unimpressed, and some of you had grander plans.

Though I was very tempted by the suggestion of crab dip — and I think that’s what we’ll be tackling next time — I just had to know if sous vide-ing a chicken wing would render its flesh juicier and its skin crispier. (Obviously, the act of sous-vide cooking would not crisp up the wings, but rendering out some of the fat before frying could help.) 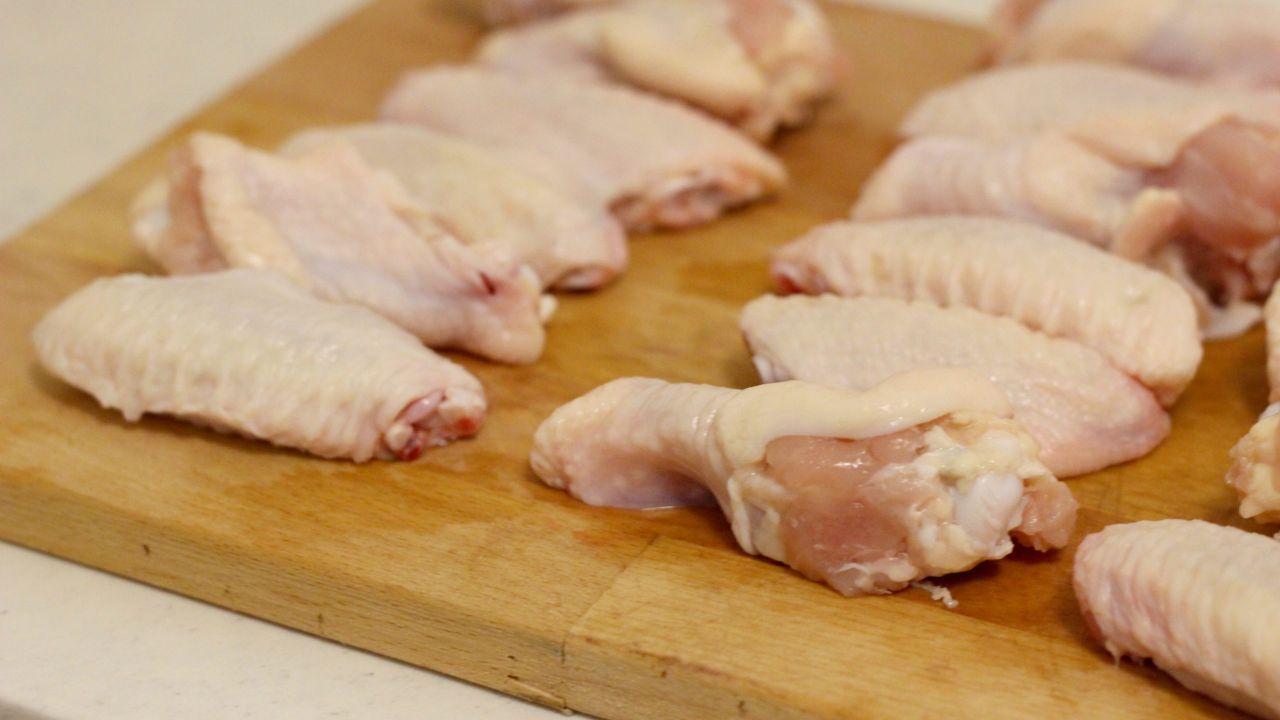 First, I bought four pounds of wings and separated them into the classic wing shapes, which I call “tiny drumstick” and “the better part.” I then prepared four one-pound batches of wings in the following ways: These bags were then sealed, and cooked in a 150-degree water bath for four hours, during which I did laundry, enjoyed a cocktail or two, and ate many gummy candies. 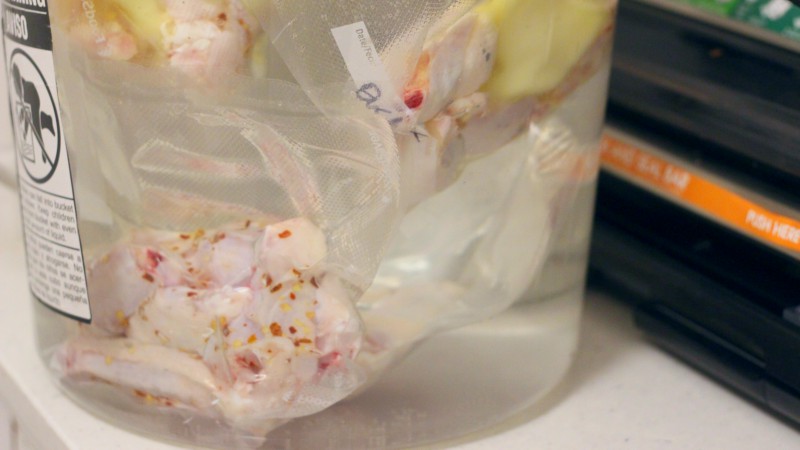 A different kind of bucket of chicken.

A different kind of bucket of chicken.

Once the chicken was done floating around in its hot tub, I removed the wings from their respective bags, patted them dry with paper towels, and laid them out — all nice and neat — on a cooling rack set inside a baking sheet. I then set the entire setup in the fridge overnight to dry out the skin a little more fully. 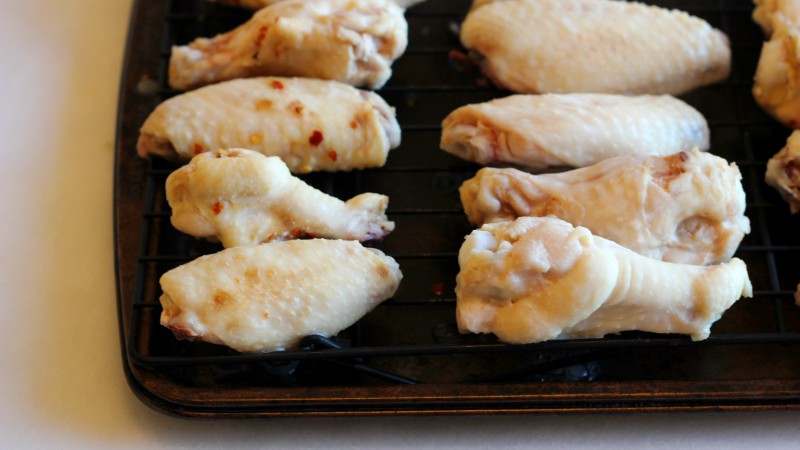 The next day, I heated some canola oil to 400℉ (never letting it get below 375℉), and fried one wing from each bag. As you can see from the below slide show, everybody’s skin crisped up shockingly well. In what scientists are calling “eerily similar to my first tango with a tanning bed,” this skin got golden brown and blistered in about ten minutes.

I then ate each wing sans sauce, so that I might taste them unencumbered by distracting (but very tasty) sauce. The wings cooked with pepper flakes had no discernible heat, but the wings cooked in duck fat were, predictably, a bit more moist. (The meat cooked in nothing but its own, rendered fat stuck to my teeth a bit.) 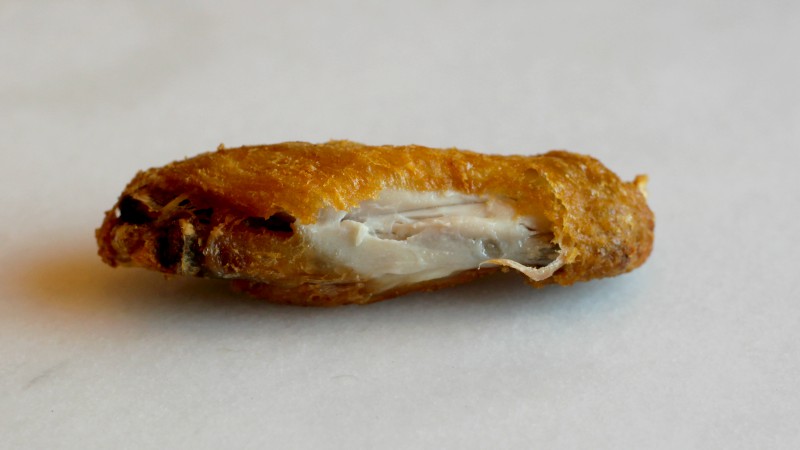 Just look at that crispy mofo.

Just look at that crispy mofo.

But sauceless wings are sad, so I melted a stick of butter, whisked in a cup of Frank’s, and tossed a few freshly fried wings in that simple, but oh-so-glorious wing sauce. 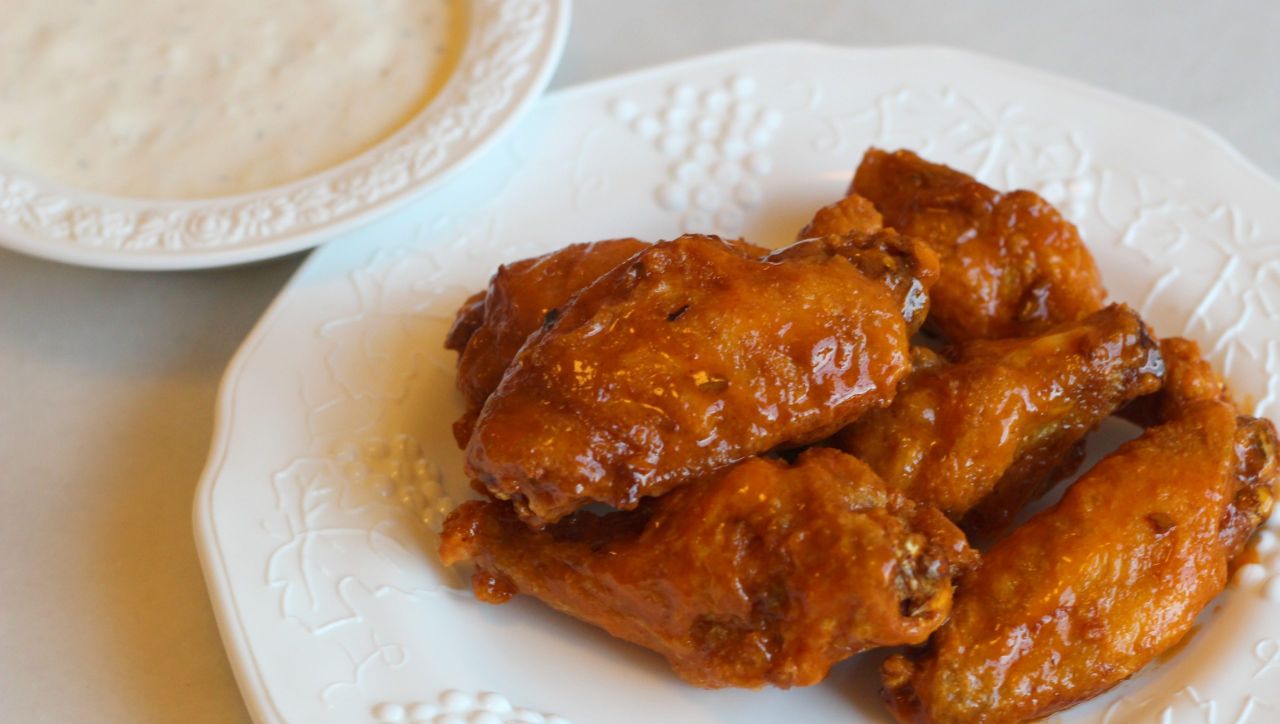 I then ate them in a ravenous manner — I had not eaten that day but also wings are good — with blue cheese because ranch is for salad. You may have noticed the lack of celery on my plate. This is because celery is the worst vegetable in existence and I don’t keep it in my kitchen. 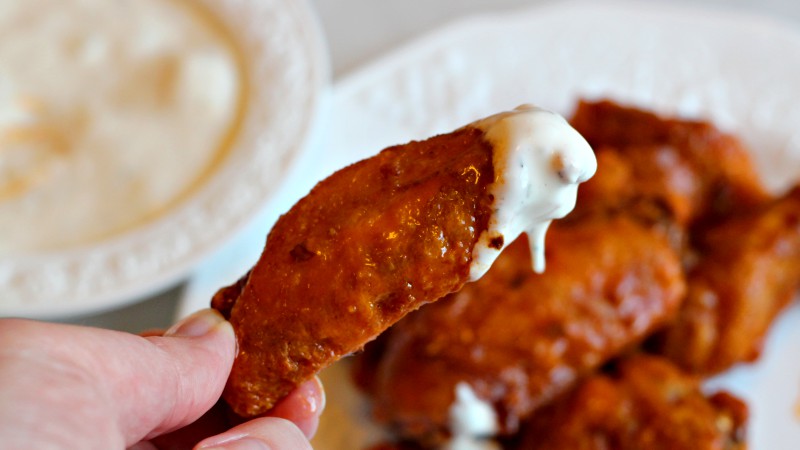 I still had many, un-fried wings left, so I put them back in the fridge until my boyfriend got off of work (at midnight), at which point I (kind of drunkenly) fried him a fresh batch, and enjoyed some more myself.

So, do wings sous vide? Yes, yes they do, and it is my professional opinion that it’s a totally worthy sous-vide endeavour. Not only does cooking them low-and-slow in duck fat make for super succulent flesh, but rendering out a bit of fat before frying makes a for a shatteringly crisp skin.

Also, you know those babies been thoroughly cooked, so you only have to fry them just long enough to get the skin how you want it. It’s really the best of all possible outcomes. Plus, once sous vided, you can either freeze or refrigerate your wings until your ready to fry or grill them, at which point you are a mere 10 minutes away from freshly cooked, pretty much perfect wings.