In 1921, Albert Einstein won the Nobel Prize for physics. He went on a lecture tour of Japan shortly after. While there, he decided that he would start tipping people with bits of advice rather than cash. Here are his best kernels of wisdom.

While Einsten’s “alternative tipping” strategy would ensure you got poor service going forward these days, some of his advice appears to have been well received and still remains in the possession of those, or the families of those, he tipped. Most recently, a handwritten note surfaced that was written at the Imperial Hotel in Tokyo in 1922, offering advice for a happy life.

“A calm and modest life brings more happiness than the pursuit of success combined with constant restlessness,” Einstein wrote in his native German. 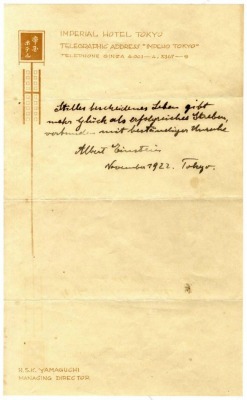 The same messenger received another note from Einstein around the same time with a message you may have heard before “Where there is a will there’s a way.”

The notes were sold this week at Winner’s auction house by a relative of the original courier. The relative said that when Einstein tipped in the notes he said: “Maybe if you’re lucky, those notes will become much more valuable than just a regulate tip.”