The first 787 Dreamliner to join Qantas’ fleet has been named ‘Great Southern Land’ following more than 45,000 suggestions from the Australian public. (Old fart musos will be pleased to hear that Aussie rockers Icehouse were invited to the official unveiling to perform their signature hit of the same name.)

Each Dreamliner will be named after something that is uniquely Australian, including animals, places and literature. Land Down Under better be a shoe-in.

“The Qantas Dreamliner will allow people to travel longer than ever before,” Qantas CEO Alan Joyce said at the event. “…It’s the best aircraft we’ve ever put in the air.”

The Perth-London Heathrow route was described by Joyce as “one of the last frontiers in aviation.” At over 14,499km and 17 hours in the air, it’s the longest non-stop 787 route currently in existence. (Qantas’ first London route, affectionately dubbed the “Kangaroo route” took over 12 days and required a train trip between Paris and Brindisi.)

More single-hop journeys to Europe and the USA are expected to be announced in the coming months. According to Joyce, over 150 new non-stop routes are made possible by the 787’s improved fuel efficiency. Seattle, Chicago, Dallas, Paris and various Asian destinations are all under consideration.

“We have seen the benefits of [cost-cutting] technology passed on to consumers and I think with the advent of this aircraft that’s going to be the trend,” Joyce said.

By not being first to market with the 787-9, Joyce also said that Qantas will avoid the costly “technology pains” often associated with a new airliner’s launch, which should also help to keep costs down. 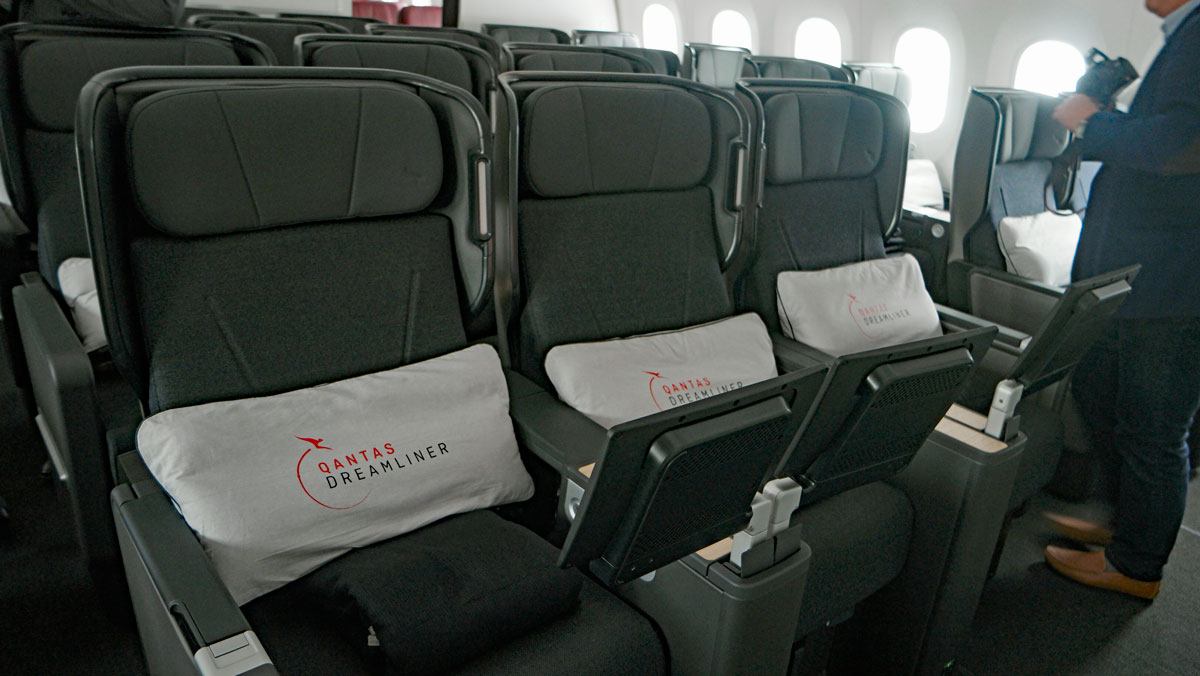 The 787 Dreamliner’s Premium Economy seats are a significant upgrade compared to past offerings. [Image: Lifehacker]

To make long-haul trips more palatable to customers, the new fleet has been painstakingly designed to minimise the effects of jet lag. Noteworthy features include larger windows for a greater sense of space, improved air quality, quieter engines and new ‘ride dampening’ technology that can detect and counteract turbulence to reduce motion sickness.

If Qantas can be believed, it also generates fewer greenhouse emissions compared to similarly-sized aircraft.

The Dreamliner’s interior and on-flight services were created with the assistance of Australian designers. This includes seating by industrial designer David Caon and an air travel health and wellbeing programme from the University of Sydney’s Charles Perkins Centre that covers everything from optimum meal serving times to non-obtrusive lighting.

The Dreamliner is scheduled to land in Sydney on 20 October after it performs a flyover of Sydney Harbour – and we’ll be on the maiden flight! Look out for an in-depth review of every cabin class, coming soon.

Lifehacker travelled to Seattle as a guest of Qantas.

Here's The Pricing For Qantas' Direct Flights To London

Qantas has revealed the pricing for its first direct flight between Perth and London - and the tickets go on sale today. A non-stop return Economy flight to London will officially set you back $2270, although Qantas is promising prices below $2000 during promotional periods. Here are the details.