Is Super Mario Odyssey Worth Buying? 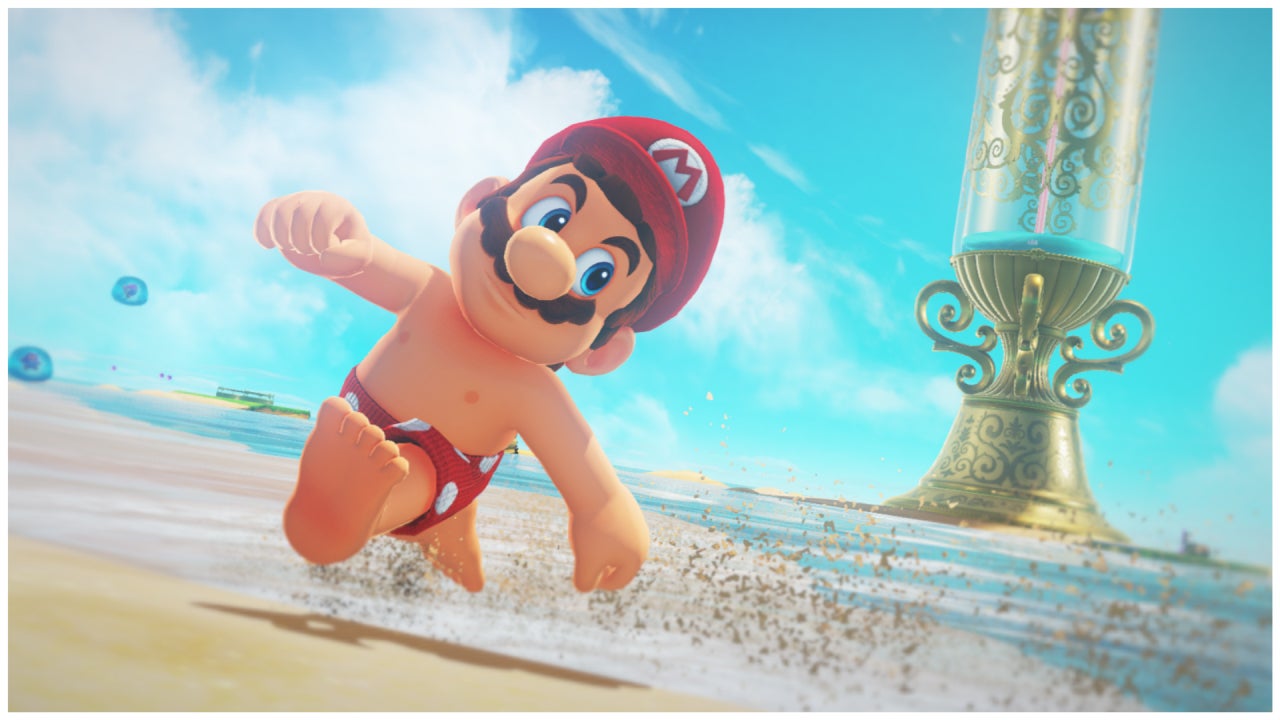 For Mario, 3D used to mean freedom. In 1996, Super Mario 64 broke Nintendo’s mascot from the shackles of having to run in a straight line, letting the player choose their own path. But for quite some time now — no matter how 3D the graphics may have been — Mario’s adventures have reverted back to running on a straight line.

With Super Mario Odyssey, that changes once more, and it’s a glorious thing.


It’s not easy to go back and play Mario’s previous free-roaming adventures. Mario 64 is great fun, of course, but it’s also old enough to drink and feeling every year of it. Super Mario Sunshine, assuming you still have a GameCube, starts off strong but devolves into a frustrating Blue Coin hunt.

These are brilliant games, but they were begging for a modern interpretation. Odyssey, to be released Friday on Nintendo Switch, fits the bill perfectly. It’s not a slavish recreation of the old Marios, but a fresh take that feels unlike any other game in the series.

What changes the feel of the game so dramatically is not the fact that you can throw your hat and possess a man’s brain.

It’s a simpler choice: You don’t get booted out of a level every time you collect a Power Moon, Odyssey‘s version of Stars or Shines. Previous games would always throw you back to the game’s hub world after you snagged one of these tokens, which represented the end of a challenge.

In Odyssey, there’s no end: Once you enter a level, you can scoop up Moons to your heart’s content. Moons power the titular Odyssey, a hat-shaped spaceship, so you need to get a minimum amount of them loaded onto the ship to have enough juice to fly to the next part of the world.

In addition to that, you’re also chasing Bowser around the world, since he — sigh — has kidnapped Princess Peach again, the one part of this game that feels stubbornly stuck in the past. You can’t leave a world until you’ve chased the Koopa king’s minions out of it, even if you’ve collected a bunch of miscellaneous Moons. 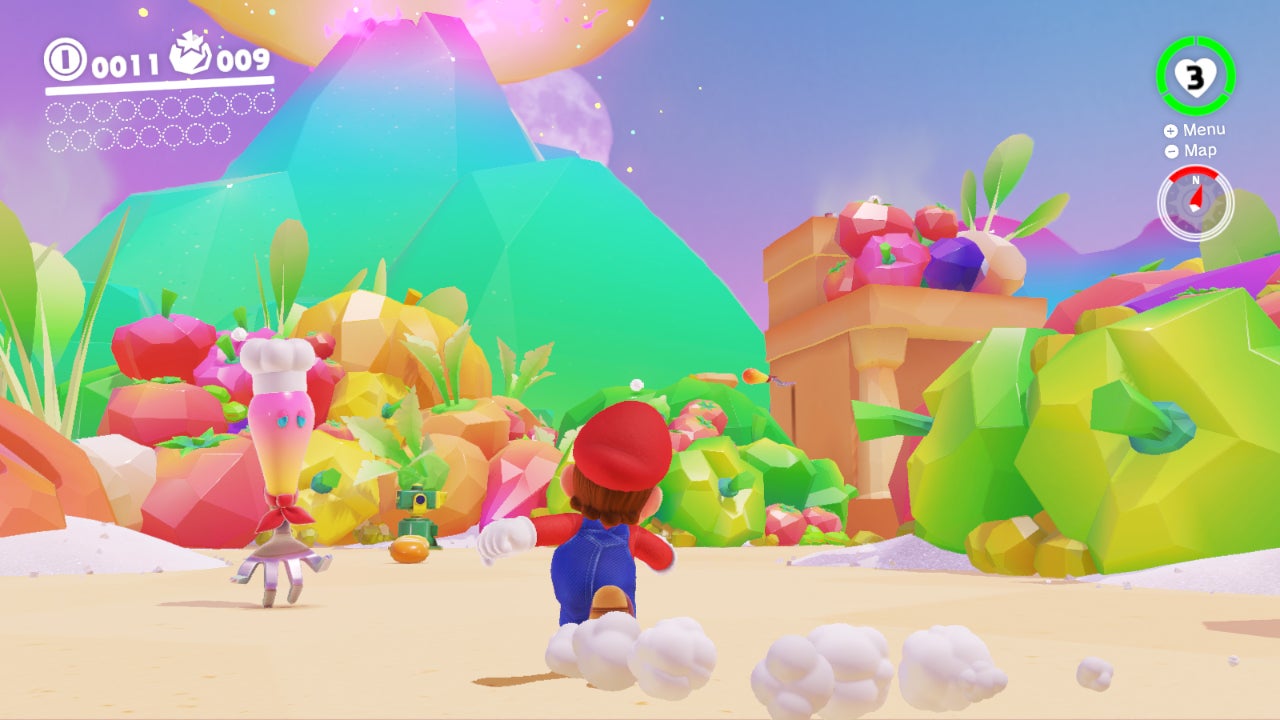 Not counting a handful of smaller secret locations, there are over 10 full-fledged worlds packed with dozens of Moons each. These are handed out like Halloween candy in a rich neighbourhood. While some are at the end of longer, more complex challenges, the vast majority are fairly easily obtainable with a few minutes’ or seconds’ work.

They might be hidden around corners, butt-stomped out of the ground, or fetched from a panoply of clever 2D, 8-bit style action sequences that involve Mario transforming into his pixelated self.

Odyssey‘s levels are, down to the last little patch of terrain, breathtakingly gorgeous, intricately designed, and wildly varied. Whether you’re swimming along a cliffside beach and the reefs underneath it, crawling through the dark underbrush of a forest where a realistically rendered Tyrannosaurus rex is skulking around through the trees, or leaping through an expansive desert of rust-red sand, the levels are alluring.

Come over here, they say. See what’s around this corner. Don’t go to bed. It’s not 2 AM. I had to play Odyssey on a very tight schedule for this review, but I think my play sessions would have been marathons even if I wasn’t on deadline.

Mario is not making this journey alone. His travelling companion is a living hat named Cappy. The basic action that this enables is the ability to throw Cappy a short distance, like a deadly cross between a Frisbee and a boomerang.

The simplest use of this is to smash stuff — defeat an enemy, bust up a crate. You can also throw Cappy, hold the Y button to leave him hanging in space, then jump off of him for extra height and distance.

Mario himself has always been blessed with a wide array of athletic maneuvers, and Odyssey‘s iteration is no different. You got your butt-stomp. The long jump, always accompanied by an upper-octave woo-hoo. And more.

There’s a whole Action Guide in the game’s menu that reminds you of all of Mario’s moves, of which there are many. 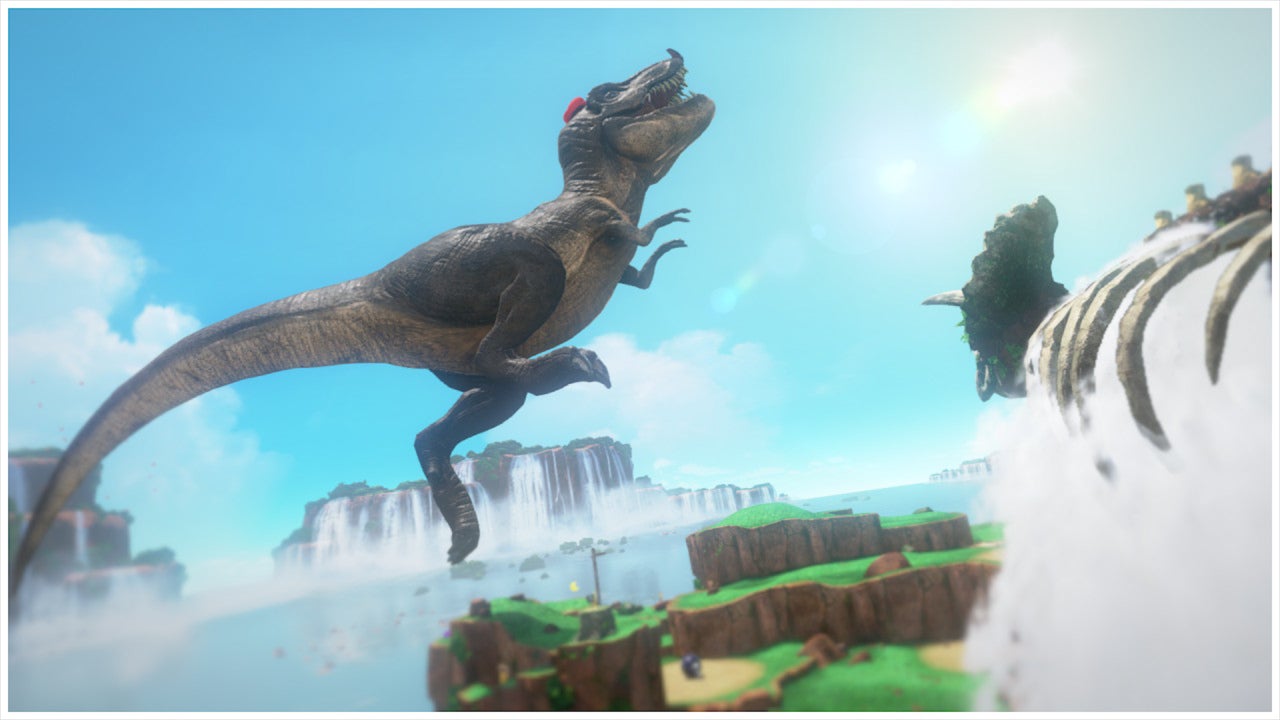 This is in the second level.

Cappy complicates this game’s complex control scheme further, because he can “capture” certain enemies, friends, and inanimate objects, transposing Mario’s very soul into these new forms, each of which has a different play style and set of controls (which are explained on the bottom of the screen).

One minute you may be doing high jumps with a frog, the next transforming into a fork that’s stuck in the side of a wall and pulling the stick back to “flick” yourself ever higher.

I’d go into some of my other favourites but they would be considered massive spoilers; just the act of discovering what you can do is part of the delight.

In a game already full of varied gameplay styles, capturing switches things up even more. Odyssey is a playground of action game types, an endless buffet at the good kind of Sizzler, the one with the chicken wings and the cheese toast.

It doesn’t allow you to get too reliant on any one set of moves, as another one is often available nearby.

Most of the capture situations involve some form of motion controls. Shaking the controller while possessing a Goomba or a frog will have them do a high jump, for example. These are not optional and cannot be turned off.

Split Joy-Cons is how the game explicitly encourages you to play; this gives you more fine-tuned control over how Mario tosses Cappy and makes motion-control moves easier to pull off in general. Of course, if you’re like me and your Joy-Con (L) desyncs all the time, this may be impossible. 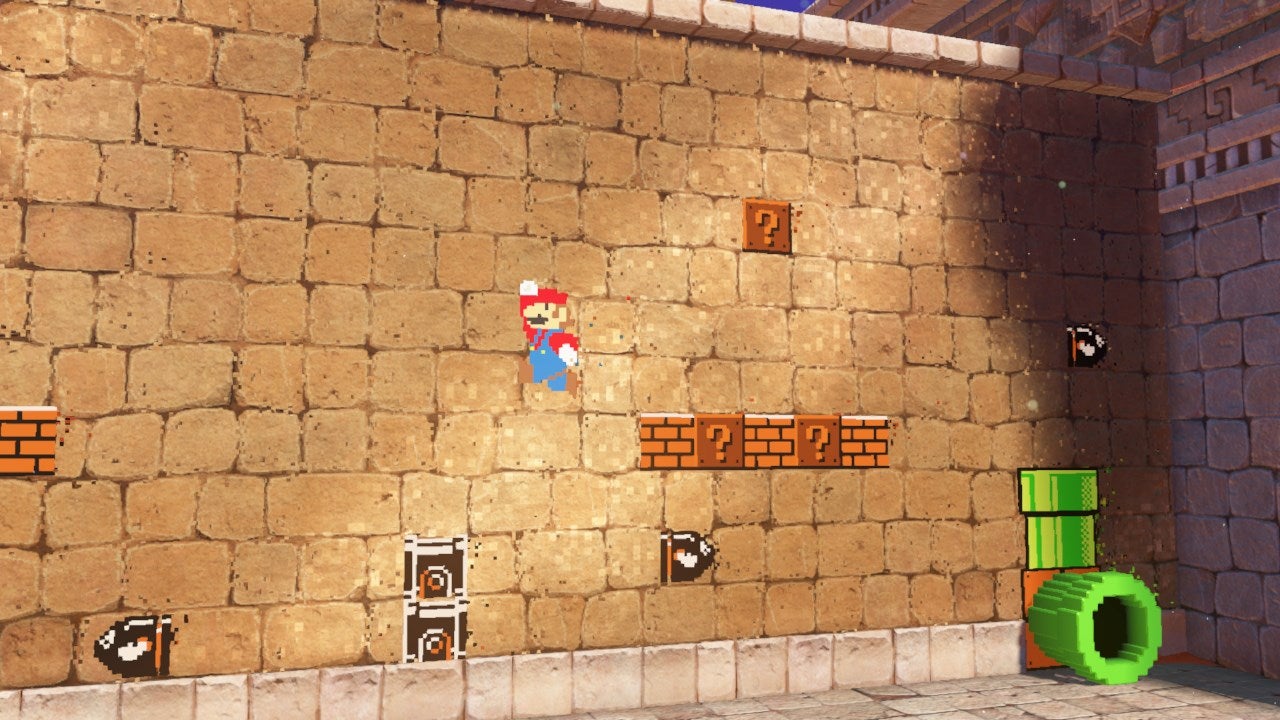 There are a lot of these.

Pro Controller is a good half-measure, even if it’s much more difficult and tiring to shake and flick the controller to do the motion moves. Handheld mode is probably the most annoying: do you really want to be shaking the crap out of your whole entire Switch?

The game is still quite playable in any situation, but there’s a clear hierarchy of convenience. (I’d still like to see Nintendo patch the game to let you turn them off, though.)

You can even play co-op if you want, with one player controlling Mario and another controlling Cappy independently. This is game-breakingly advantageous, since the player controlling the hat can just whizz him around willy-nilly taking out enemies, capturing things at any distance, or doing all sorts of cool moves I haven’t even thought of yet.

Of course, you’d need to function as a team pretty well to make this work.

Returning once more to the subject of hats, playing dress-up is a big feature of Odyssey. Coins are actually used as currency here, not just as 1/100th of a 1up mushroom (which don’t exist anymore; you just lose 10 coins when you die).

You can exchange your cash for dozens of new hats and outfits. These are generally pretty cute and/or hilarious, especially since I think this is the first Mario game in which you can run around in a wedding dress or underwear, but they don’t change Mario’s ability set. (I’m not complaining, I’m just managing your expectations.) 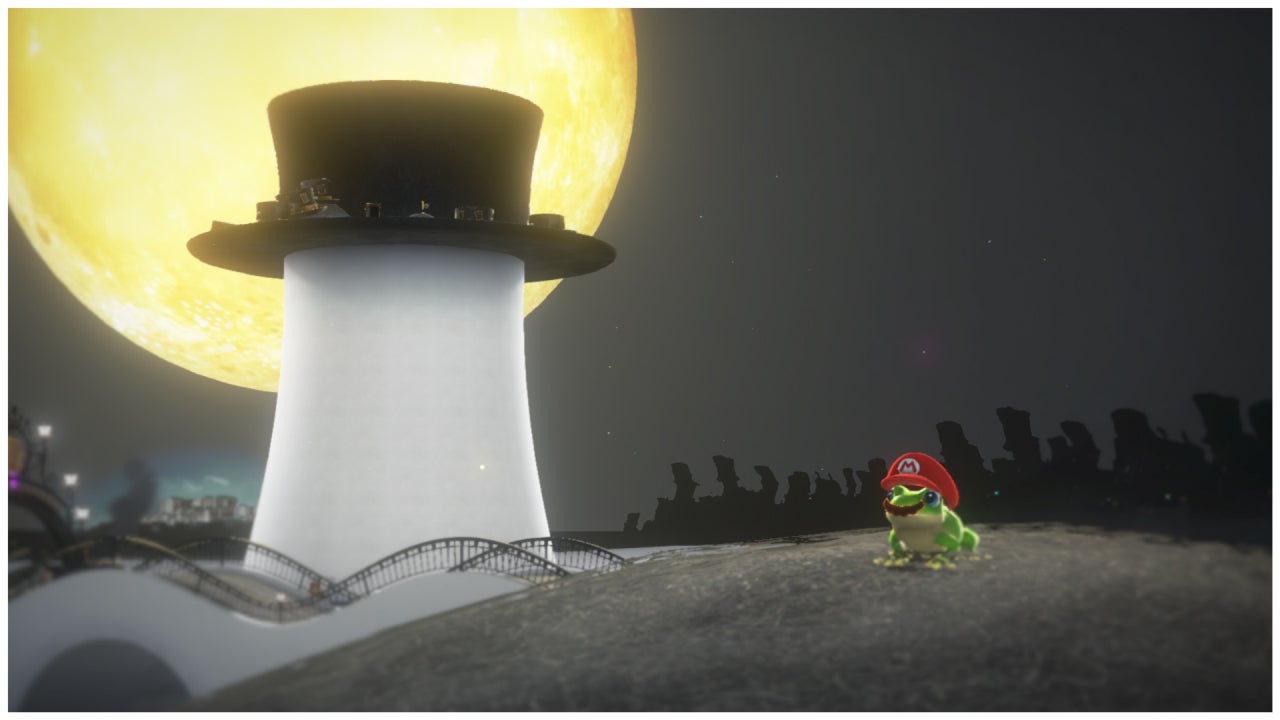 If you thought Mario could jump high…

In addition to standard coins, each major level has a finite amount of currency that can only be used in that destination to buy costumes and decorations for the Odyssey ship. These purple coins are placed in ever-so-slightly out-of-reach places as a reward for thoroughly exploring each map.

And then there are the Moons. The one thing that strikes me as a bit inelegant about the game design is that a Moon is a Moon is a Moon, regardless of how you came across it. 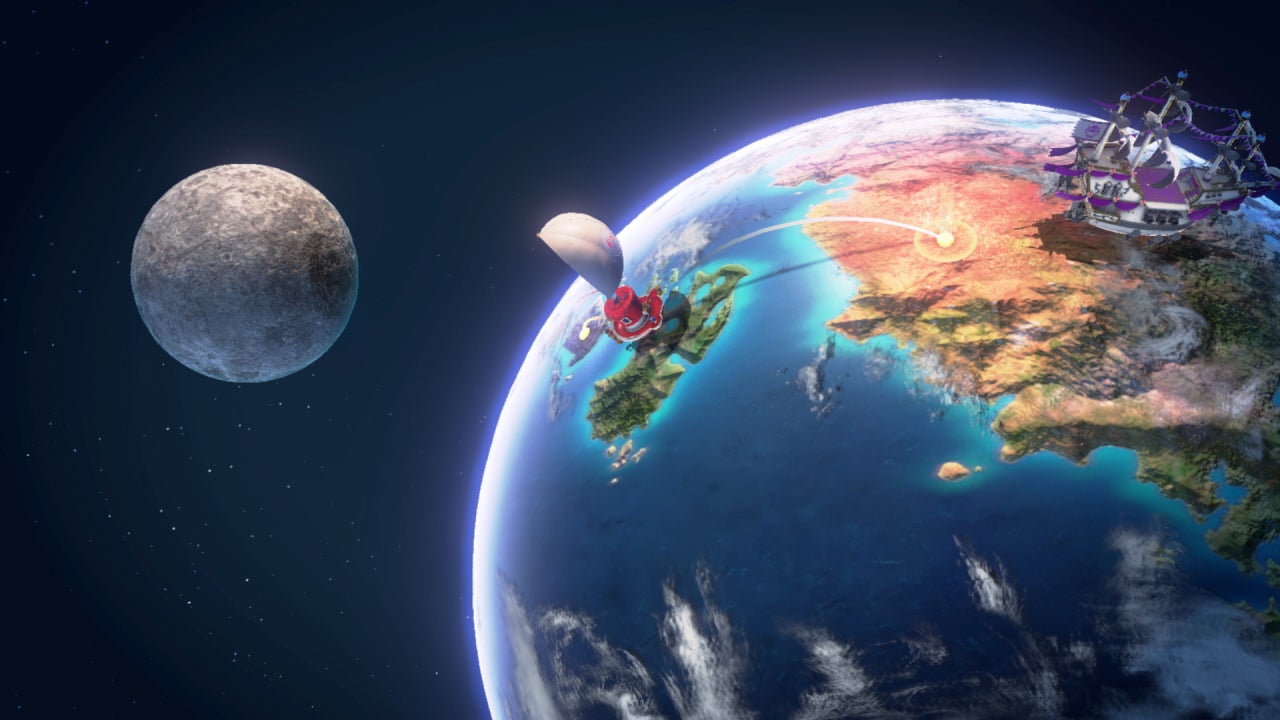 BACK OF THE BOX QUOTE

Dad, go sit on the couch and watch Mario. - My kid

DOES MARIO STRIP TO HIS BOXERS

Occasionally, finishing a boss fight or another massive storyline sequence gets you a Multi-Moon worth three Moons, but there are only a couple of these. It would have been nice to get a grander reward for choosing to take on more difficult optional tasks.

You need a certain amount of Moons to progress to the next level, but otherwise, after many hours I started to wonder what I was meant to do with the gonzo stockpile of extra Moons I was racking up by being thorough.

Surely these would eventually let me access something amazing, yes? In my view, no. There’s a good reward for defeating Bowser and liberating Peach. But the game also then dangled two major Moon-collecting milestones in front of me, promising that the Odyssey could travel further if I collected literally hundreds more Moons. Once I did that, my ultimate “reward” was…

…hey, I’m going to spoil an end-game surprise. Scroll down past the picture of Mario’s naked chest if you want to skip it.

…a tiny new world containing nothing but a brutal, lengthy, checkpoint-free Mario murder machine. I gamely put in a few hours slowly picking my way through until I got to what I thought was the end, only to go down a pipe and discover a massive new gauntlet of pain. I died instantly, got sent all the way back to the beginning, and bounced hard off of it.

Don’t get me wrong: I don’t mind that this level exists for that sort of player, but I was pretty bummed that the reward for Moon collecting was all stick and no carrot.

Disappointing as that prize was, I should point out that the actual endgame sequence itself, everything from the discovery of Bowser’s hidden keep to the final fight to what comes after, was astonishingly good — including the extraordinary music, which is a major highlight of the whole game.

This was just one of many similar sequences in Odyssey in which every element gelled so well that I was simply enraptured by the beauty of the whole experience.

In that sense, perhaps as it should be, what you find at the end is not as rewarding as the journey.