How To Get Siri To Pronounce Your Friends’ Names Correctly

One of the most useful things you can do with Siri on your iPhone is dictate a text message and send it to a friend, but that can also reveal one of the most annoying flaws about Apple’s software assistant: Siri really sucks at pronouncing uncommon names. Thankfully, there’s a solution if you’re tired of hearing Siri mispronounce the same names over and over.

AppleInsider has a video guide on how to correct Siri’s pronunciation. Check it out below, or read on for step-by-step instructions if you can’t watch a video right now.

How to Fix Siri’s Pronunciation of Your Friends’ Names

The next time Siri mispronounces a name, just respond, “You pronounced it wrong.” (You can also trigger the interaction by saying, “Hey Siri, show contact…” and then spelling out their name.) Then correct the AI’s pronunciation.

Siri will ask how to pronounce the contact’s first name. Say it out loud and you’ll generate a list of options with a play button next to each one so you can listen to the audio. Pick the best pronunciation, or tap on “Tell Siri again” if none of them work. Once you find the right option you’ll do the same thing for their last name and then you’re done. 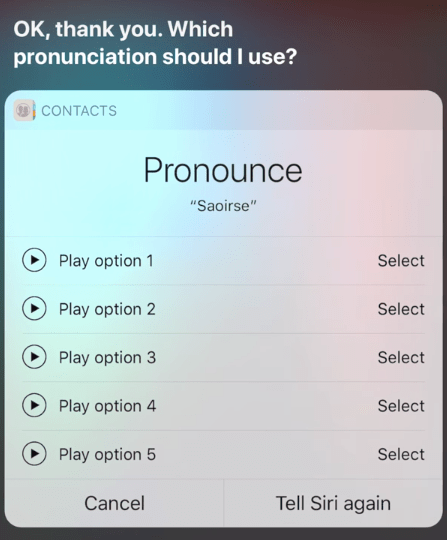 If you don’t feel like talking to Siri, there’s also a text-based alternative. Just go into your iPhone contacts, pick a friend and select Edit. Then scroll down, tap on “add field”, and pick “Pronunciation first name”. Type out how Siri should pronounce it. Then do the same thing for their last name too.

Finally, if Siri keeps mispronouncing your name just say, “Hey Siri, who am I?” When the AI offers a garbled version of your name in response, respond, “You pronounced it wrong,” and follow the same steps as before to set up the right pronunciation.