How To Craft Your Very Own Tiki Drink

Tiki drinks are a super fun way to get hammered, and are, coincidentally, the only type of drink that has caused me to set my pants on fire in public. (Thanks a lot, Smuggler’s Cove.) They are also, generally speaking, harder to make at home than most other cocktails; but hey, it’s Retro Week, and if you’re to believe the retro people of the world, everybody was literally better at everything back then.

Sticking with that theme, we’re going to pretend that making 10-ingredient drinks perfectly in your house is an attainable goal, like paying for university with a part-time job. The word “tiki” can conjure up all sorts of fun things — extravagant garnishes, secret recipes, swinger parties, and a lot of polyester, just to name a few, but we’re not gonna talk about most of that. What we are gonna talk about is one overarching principle of tiki drink-making: “What one rum can’t do, three rums can.”

What one rum can’t do, three rums can.

Simple cocktails, executed well, are things of beauty. It’s hard to find a better baseline for what makes anything “good” than the age-old concept of doing the most with the least. But tiki drinks are a lot more base-jump than baseline. They’re extravagant and complicated and generally ridiculous, and that’s why they’re fun. 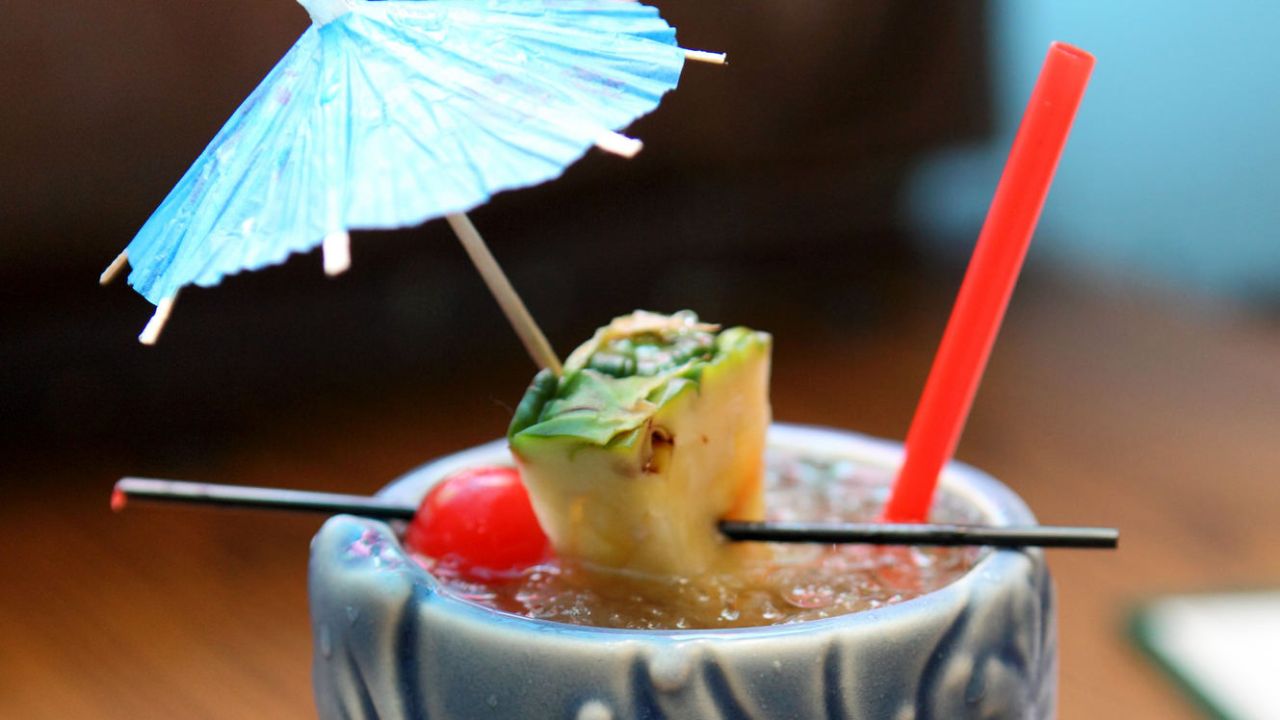 One simple way to make a little sense out of a long ingredient list is to wrap your head around the above quote from Tiki icon Don Beach, which we’ll refer to from here on out as the “Three Rum Principle”. What the Three Rum Principle gets at is something that many modern cocktail bars play with all the time — the idea is that once you break a simple drink up into its component parts, any one of those components can then be further split into multiple ingredients that do the same thing in concert, but in a more interesting, and hopefully worthwhile way. This sort of multiplication by division can of course get over-complicated really quickly, and often results in muddled flavours hardly equal to the sum of their parts. But when executed well, this principle is one of the things that makes tiki drinks, and drinks of all stripes, complex, unique and beguilingly fun.

We’ve talked a bit before about how most cocktails can be traced back to some really basic templates: Old Fashioneds, Manhattans/martinis and sours. All of these cocktail types illustrate the principle that one way to make a given amount of base spirit more palatable and interesting is to add a corresponding amount of:

At the end of the day, a given amount of any base spirit can stand up to a certain amount of the above variables, with a little wiggle room given for the particular spirit, and the palate of the imbiber. But there are a lot of different ingredients that fall into the categories of base spirits, sweeteners, aromatised wines, modifiers and citrus juices, and there is no reason that if the total amount of a cocktail component still balances the base spirit, that component can’t be comprised by more than one ingredient.

Here’s a simple cocktail we all know and love:

And here’s a recipe for a cocktail on the menu at my bar (Double Dragon):

To get from the Old Fashioned to our cocktail at DD, we’ve divided the base spirit into three not quite equal parts: Bourbon and two very distinct types of apple brandy. The bourbon, which is sweet, round and caramel-y, serves as a great jumping off point, but also holds the other ingredients together really well. The apple brandies are incredibly distinct — overproof American apple brandy provides some heat, and Calvados brings a really unique fresh apple funk. For some additional fruit flavours, we’ve split the sweetener between our traditional syrup, and an apricot liqueur. Note here that both the spirituous and sweet ingredients top the original Old Fashioned ratio of 60mL to 2 bar spoons — where there’s a little more of one, there has to be a little more of the other.

And here’s another recipe from DD:

For this cocktail, we’ve split the base spirit between gin, mezcal and Aperol (typically considered a modifier, but balanced enough on its own that it’s hardly a simply “sweet” ingredient); swapped our citrus; and split the sweet component between Ancho Reyes — a rum-based ancho chile liqueur that is soooo hot right now — and good old honey syrup. Another thing to notice here: Most honey syrups will call for two or three parts honey to one part water. I try to keep our syrups at DD less sweet, generally speaking, in part because we so often use more than one at a time, and this allows us to measure them in larger, more accurate quantities per their relative sweetness. You can get “tiki” without fancy garnishes. Photo by Claire Lower.

So how do you apply this principle at home? Aside from going out and buying a cocktail bar’s worth of bottles, try making your next few purchases intentionally complimentary, or splitting ingredients that are the least costly. Here are some places to start:

Though it might seem unconventional, this pairing works deceptively well in a whole range of cocktails, and actually features as the base for one of the easiest tiki drinks out there: The Suffering Bastard, which is a lot like a Moscow Mule, except good.

Shake with ice and strain into a collins glass filled with plain ol’ ice. Top with ginger beer — garnish with an orange twist and cucumber slice.

Just as indigo goes with other indigos, so too does rum go great with other rums. It also, unsurprisingly, adds a pleasant, earthy funk to cocktails featuring almost any other barrel aged spirit. If this sounds like something you would enjoy, try this combination on for size:

Shake over ice and strain into coupe glass. Garnish with grated nutmeg.

It is what it sounds like, but people love their syrups. (Case in point: The Pumpkin Spice Latte.)

Shake over ice and strain into coupe glass. Garnish with nothing.

Put It all Together

Once you’ve got a feel for the above tactics, you can combine them all to create a twisted Slurpee from craft cocktail hell. You’ll frustrate and fascinate curious onlookers. You’ll alienate Old Fashioned drinkers. “Why so many ingredients?” they will ask, and you’ll reply, like an eccentric, pink haired, bespectacled baby boomer at a craft fair, “Because I paid for uni with my part-time job, and I’ll cry if I want to!” Or, you know, just quietly whip this spicy little number together and sip it smugly:

Shake over ice and strain into coupe glass. Garnish with nothing.

Will these recipe ideas make you a tiki person? No. Only a pair of really loud shorts will do that. But they are fun to futz with and, at the very least, the principles behind them will help complicated cocktails, tiki or otherwise, make a little more sense, whether you’re out at the bar or making them at home.