If you’re going to be trapped in a small box with a few hundred people for hours on end, the least you could do is try and make the ride as comfortable as possible for everybody. But it seems that there are still some of us that don’t quite understand the finer aspects of good air travel etiquette, so it’s time to change that.

Skyscanner recently quizzed Australian travellers on what their travel pet peeves were, which got me to thinking about all the unspoken rules of air travel that no one seems to follow. We’ve already told you about the many ways you can improve your train travel etiquette, so why not air travel too?

Here’s the steps you can take to maintain Great Air Travel Etiquette:

Boarding a plane is a little bit like shopping on Boxing Day. Everyone wants to get in as quick as they can and secure the best ‘deal’ before it runs out. Except in this case, the best ‘deal’ is usually the premium overhead luggage space and … well, not much else. If you are at the gate when the plane starts to board, you’re never going to miss it.

Personally, if I’ve booked an aisle seat, I tend to wait it out. This is great because then I don’t have to do that awkward dance with a later passenger who needs to get past me and sit in my row. I think the benefit of getting an aisle seat requires you to be a patient boarder. And anyway, unless you’re seven years old, how can you be that excited to spend the next however-many-hours in a hollowed out metal tube that uses physics to stay in the air for an extended period of time, hey?

Take Care Of Your Odours

Now, when travelling on most trains and buses, you can pop the window open if you’re close enough and even if you’re not, the trip is generally short enough to make that stench bearable. Obviously you can’t open a window on a plane, so you need to take care of your hygiene.

A small travel pack of the hygiene essentials is crucial to stave off the pungent odours that may start emanating from your body. Get a small toothbrush, some toothpaste and some roll on deodorant and freshen up halfway through that long-haul flight. If it’s just a short domestic trip and you’re short on time how about using a breath mint? It’s easy to not smell like a dumpster fire. 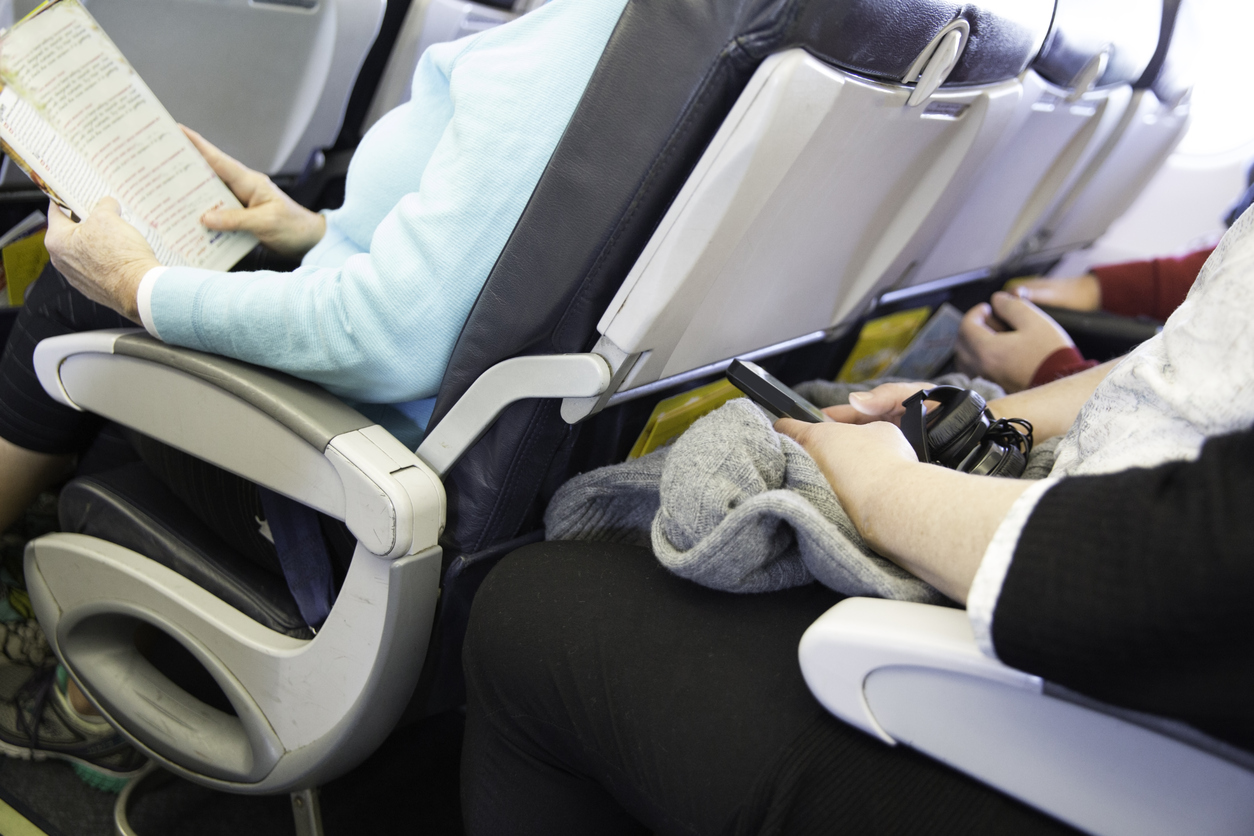 Yes, there are some general rules you should follow when deciding whether or not to lay that chair back. On short flights, there’s little reason to recline at all, you can’t do it at takeoff, then there’s a meal service where the courteous thing to do is leave the chair upright and then there’s landing, where you can’t recline. Don’t be that person who reclines their chair the second the seatbelt sign is switched off, you’re making yourself seem like a selfish jerk.

On long haul flights it makes sense, for sure, and hopefully it helps you sleep a little better. I always think it’s a good idea to recline as slowly as possible too. If you push back on your seat as hard as you can and there’s someone behind, hunched over a laptop or with a drink on their tray table, then they’re going to be pretty livid that you’re acting like a maniac who can’t sit straight.

It can be weird asking other passengers for some armrest real estate, so if you’re shy, place your elbows as far back on the armrest as possible. This isn’t uncomfortable and will leave the slightly-less-comfortable position for the passengers on your left and right. Plus, they’ll both get a free hit at the aisle armrest or the window armrest, so how can they complain about that?

Who gets the armrest if there’s four seats? I’d say work from one side to the other. Yes, a passenger in the aisle seat will theoretically end up with two armrests, but everyone shifts and moves around so much during a flight that, at some point, you’re bound to end up with the extra elbow platform.

Okay, this is one that gets me literally every single time I’ve caught a flight. There’s always passengers that want to ‘jump the queue’ and get out before everyone else. Take this into account: When you booked your flight, or when you were given your boarding pass, you were assigned a seat. The unspoken rule is that, if you’ve got a seat at the back (and they’re not disembarking from the rear), you’re going to be last. I’m sorry if that means you’re going to miss your connecting flight.

On the flip side, there’s always that one passenger who’s just taking their time, as if being inside this giant cigar-shaped cage is the least of their concern. They stand in the middle of the aisle, forget where they’ve put their bag and then proceed to trying to solve this puzzle of their own design by trying to walk back down the aisle full of passengers.

Everyone wants to get off the plane, so just remember that airline staff are usually willing to help and so are fellow passengers – if you’ve left your luggage in an overhead locker further down the aisle, yell out, someone will come to your aid.