Quickly Find The Hipster Neighbourhoods In Any City With This Tool

When you’re visiting a town for the first time, it can be pretty tough to get the lay of the land. Especially if you’re moving to a new place, it’s hard to tell whether one neighbourhood would be better for you to live in than another, or whether you’re accidentally (or intentionally) renting in the most hipster neighbourhood in town. Now, there’s an app for that. Or a website, actually.

Called Hoodmaps, the site has crowdsourced maps of major cities, filled with information like whether particular areas attract hipsters, tourists, or rich people and what you might find there.

For instance, every San Francisco resident can tell you the Marina is where you’ll typically find “frat bros” and there’s a corner in the Castro where on a warm day you’ll probably see a naked guy walking around (found that out the hard way riding by in a bus my first weekend in town). But that’s not exactly information you’re going to find in a guidebook, or at least not all in the same guidebook.

The idea came to founder Pieter Levels based on his own travels.

“Every time I travel to a new place it’s hard to figure out which parts of the city to go. I very often end up in the tourist center,” Levels said in a blog post announcing the web app.

“I’m originally from Amsterdam and I know 90% of tourists will never get any idea about the “real” Amsterdam because they just stay in the tourist center. It’s a fake area that has nothing to do with Dutch culture.

“I want to get a quick overview of what a city is about. What are the cool “hip” areas? Where’s the wealthier areas? What areas are more suburbian (and maybe boring for me?).”

He actually built the whole thing from start to finish publicly, chronicling every step of the way. If you’re into app development, his blog post is a potentially interesting read. It’s currently available in 2000 major cities around the globe, including Australian capitals. 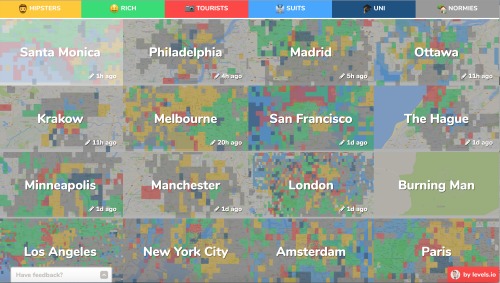 Hoodmaps are colour-coded with the type of people you might find in a neighbourhood. The options are Hipsters, Rich, Tourists, Suits, University, and “Normies.” You can toggle a few things off and on as overlays on the map: tags, cafes, and rent and home prices.

Tags share things like that naked guy insight or that the Richmond District in SF is going to be full of fog, and can be sorted by all tags or just new ones.

As City Lab notes, the idea isn’t without issues. The user-contributed aspect of this makes it easy to perpetuate negative stereotypes that may or may not be true. The labels for each neighbourhood are also pretty white-centric, so you’re definitely not getting the full picture. And what does “normies” mean, anyway?

That said, if you’re headed to a new town it can be a quick-and-dirty way to get a quick feel for what you’re in for, and to make a slightly more educated plan on where to get that hotel room.