Making Your Own Rough Puff Pastry Is Absolutely Worth It

Though I like to bake, I don’t consider myself a “serious baker”. Sure, I make my own pie crust and can bake a pretty decent loaf of bread, but one thing I have wanted to mess with is puff pastry.

Because really, why would you? Puff pastry is a pain to make — all that rolling, chilling, folding and so on — and the stuff you can buy at the grocery store is good. But then I got very into The Great British Bake Off (the Mary Berry years), and I kept hearing the words “rough puff”.

The vaguely obscene-sounding dough — and doesn’t everything on that show sound naughty? — is supposed to deliver a pastry that is similar to the flaky full puff but, instead of incorporating giant slabs of butter into the dough, you break the butter into tiny pieces, mix it into the dough, and then commence with all the rolling and folding. To see if this cheaters version could replace the sheets of commercial stuff that live in my freezer, I decided to give rough puff a go.

First, I needed a recipe, so I turned to a man who — though the exact opposite in temperament of my beloved Ms Berry — knows a thing or two about puff pastry, Gordan Ramsay. The volatile chef’s recipe is very simple; all you’ll need is:

However, because I can’t leave well enough alone, I altered his recipe very slightly, freezing the butter so I could grate it. 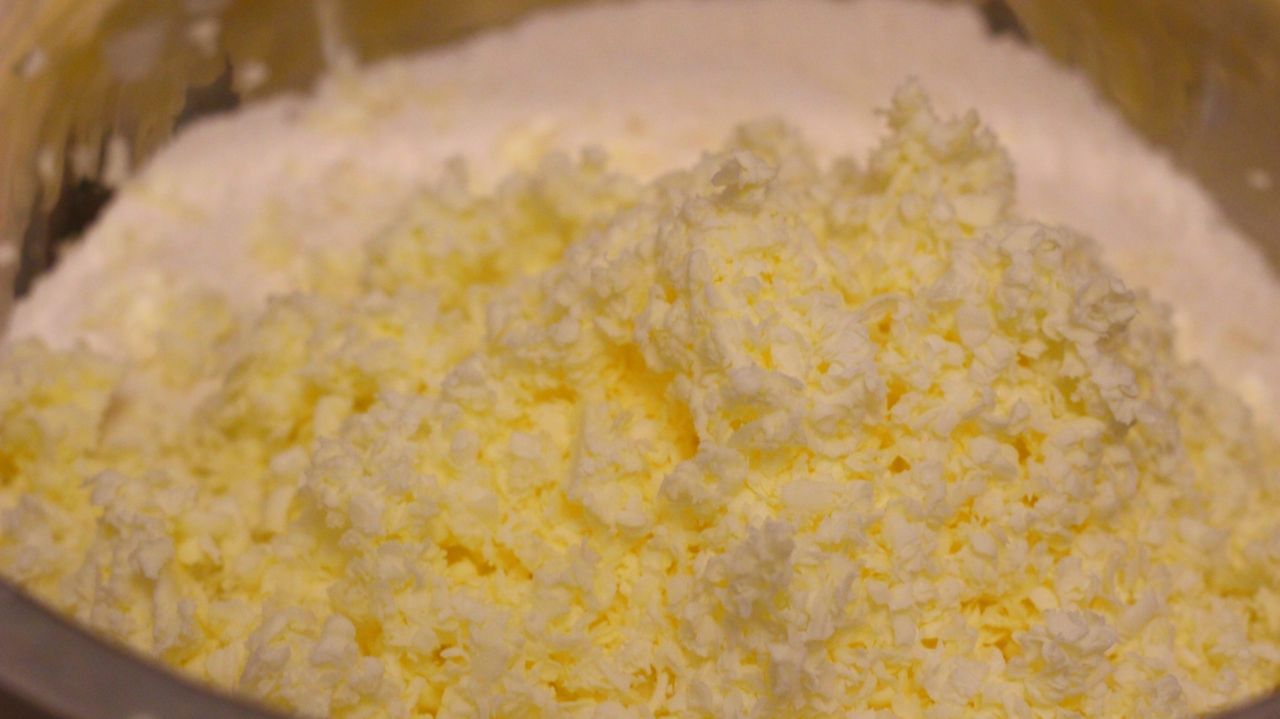 I sifted the flour and salt together, added the the shredded butter, then gently tossed everything together until the butter was well coated. I then made a little well in the dry ingredients, and slowly added ice water, a splash or two at a time, gently mixing everything with a wooden spoon until a firm but rough dough formed. This ball of dough was then put in the fridge to rest for 20 minutes, after which it was moulded into a fine rectangle. I then rolled it out until it tripled in length — it ended up being about 61cm long — making sure I could still see pieces and streaks of butter. I then folded one third down to the centre, then the other third up and over that. I gave the square a quarter turn, and repeated the rolling and folding. 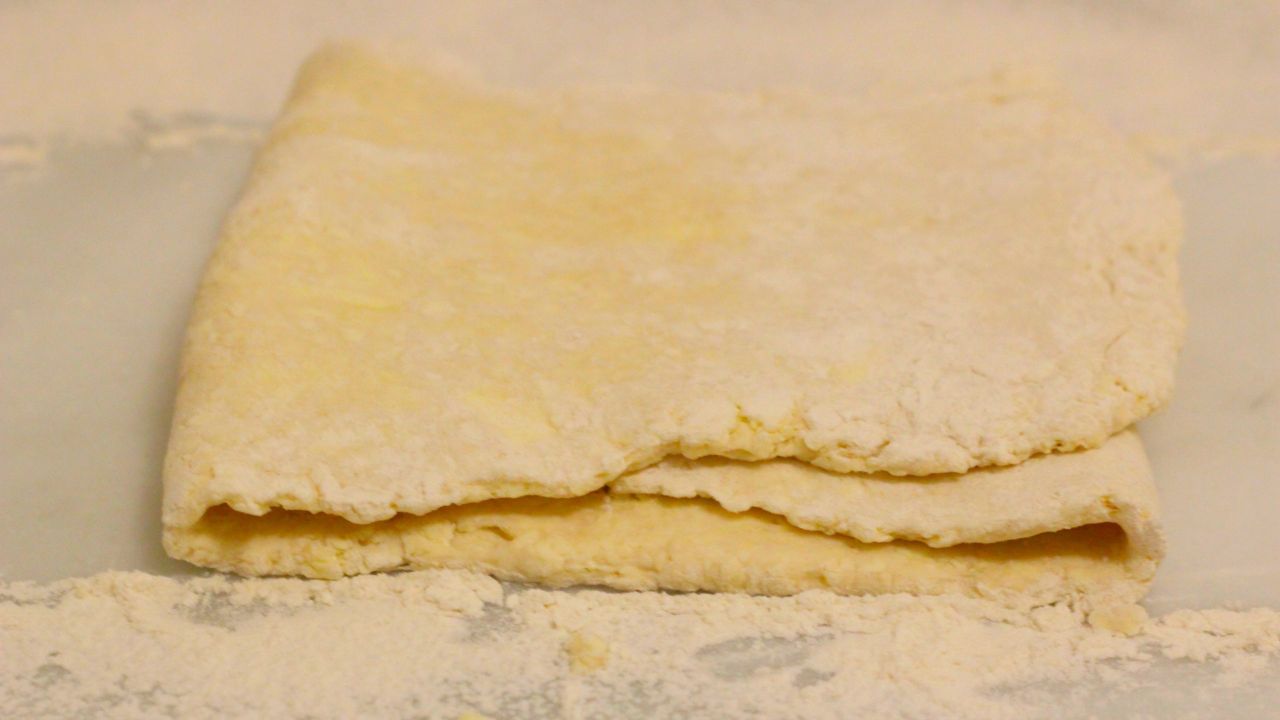 The dough went into the fridge overnight — wrapped in plastic wrap, naturally — and I went to get a burger and a beer with the boys (naturally). 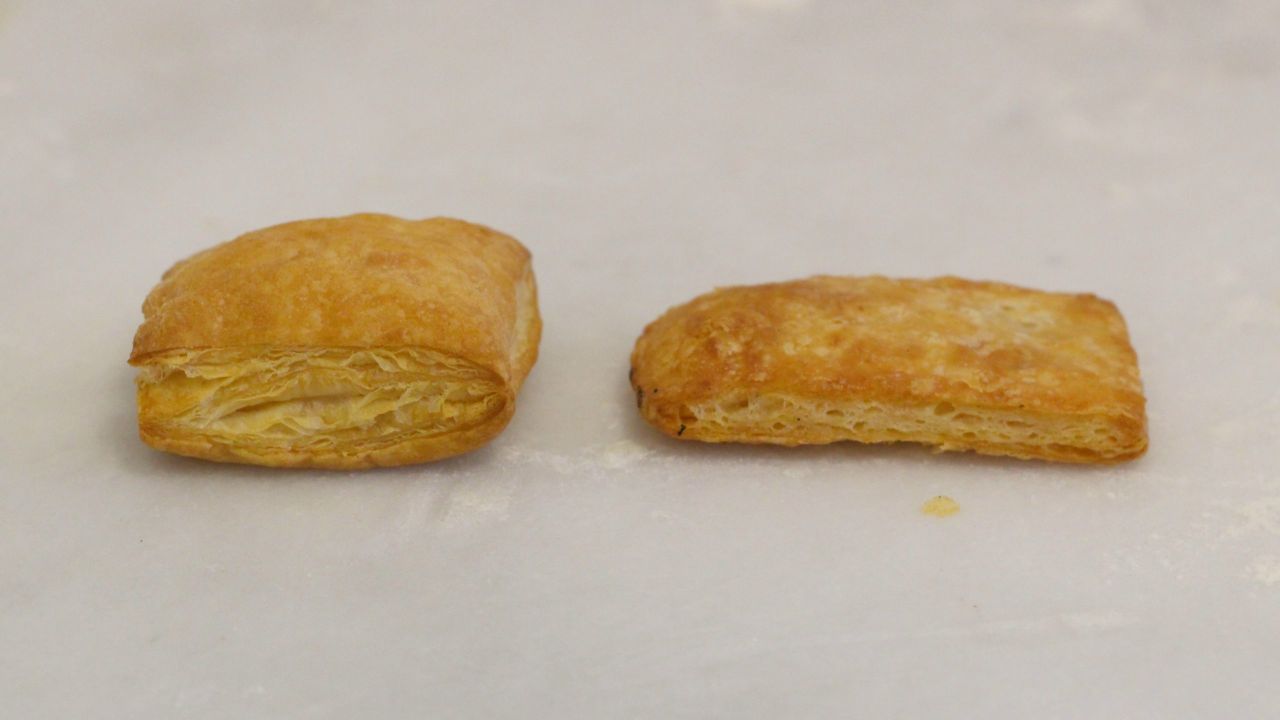 Guess which one I made? Go ahead, guess.

Guess which one I made? Go ahead, guess.

The next morning, in the cold light of day, I rolled out my buttery square once more, then cut off a piece and baked it alongside its store-bought cousin in a 204C oven. As you can see from the above photo, the store-bought puff pastry (on the left) came out much, much puffier than my rough rider, and I was briefly dismayed. “This just in: Making your own puff pastry is still dumb,” I sent to a co-worker over Slack, such was my disappointment. But then I tasted it, and my opinion flip-flopped hard. I’ve always known that frozen puff pastry was made with shortening, not butter, but that had never really bothered me before. However, after tasting this buttery rough stuff, I am now firmly bothered, because the butter does make a big difference. (For reference I ate the whole square of the rough puff, and tossed the store-bought sample.) The smaller guys are the rough puff.

The smaller guys are the rough puff.

To see how this would translate into cookies, I made some mini Nutella palmiers. Not only did the frozen pastry cookies morph into mustaches for some reason, but they tasted nowhere near as good as the cookies that contained butter. If you’re a human who has tasted butter, you’re probably going, “Oh yeah, duh Claire,” but I really need to taste to believe.

So, is this rough puff stuff worth it? Yeah actually, it is. It’s super easy to make, and its buttery flavour would absolutely sing atop a pot pie, folded around some apples (for a galette), or twisted into a cheese straw. Though you won’t get the super tall, flaky layers of true puff pastry, the layers that you do get taste so much better that the store-bought stuff, and I’d rather impress people’s mouths than their eyes.