Horrible Rick & Morty Fans Demonstrate How Not To Be A Fan

Why does everyone hate fans of the sci-fi cartoon Rick & Morty? It’s a question that spawned two massive threads on the Rick & Morty fansite known as Reddit. A Twitter search for “Rick & Morty fans” shows that yeah, a lot of people do hate them, calling them obnoxious and elitist.

There are two answers:

Neither of these problems is unique to Rick & Morty. And it’s possible, even easy, not to be either type of fan. Here’s what to avoid. 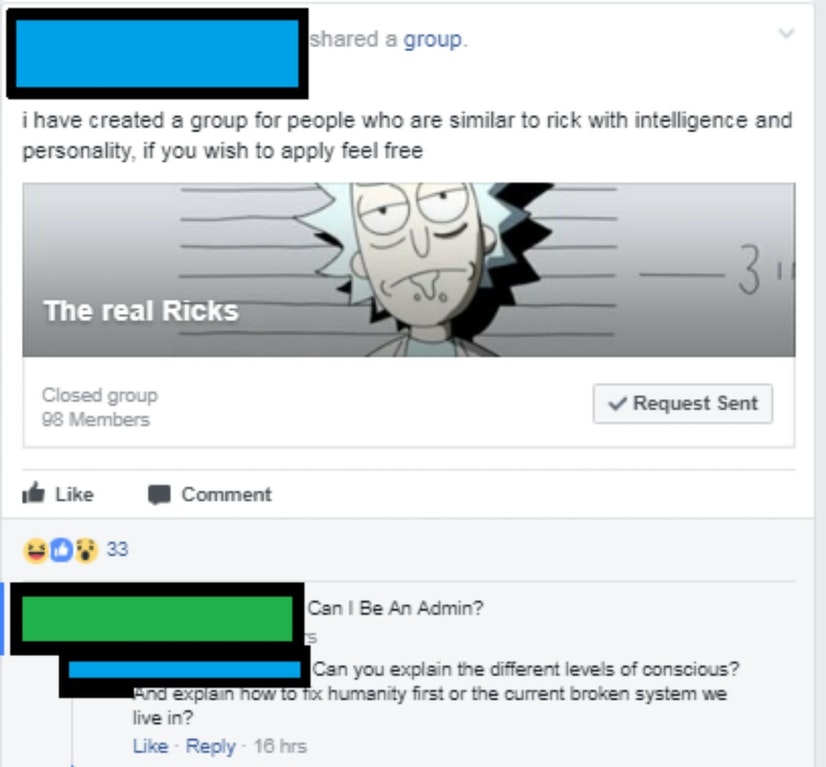 To some extent, any fan of anything popular will be a little annoying to a non-fan. If you don’t watch Game of Thrones or Arrested Development, or listen to One Direction or Beyoncé, or read David Foster Wallace or Harry Potter, you get this. But in all these cases, it’s the extreme fans who really ruin things for the rest of us.

I think if The Simpsons started in this era, fans of that show would probably be as obnoxious as Rick & Morty fans.

If you’re a good fan, you want everyone to enjoy what you enjoy. (If you don’t, well, more on you below.) So here are some tips for behaving in public so you don’t drive everyone else away.

Much worse than the annoying fans, while often opposed to them, are the elitist fans. They also love their fave too much, but instead of spamming this love out to as many people as possible, they try to hoard it for themselves, insisting that other people, including the people who make it, don’t deserve to join the fandom.

While the conversation above was probably made up (to impress who exactly?), it’s common for fans to “test” other fans, and it’s overwhelmingly a male-on-female attack. Baseball fan Megan Brown once famously told off some dick from a dating app who decided to test whether a woman could really be a fan of a sport OMG.

it's so insulting when dudes try to quiz me about sports soooo i had a little pun fun ⚾️❤️ pic.twitter.com/s1X0qJagrp

Old white men are the Internet Rick & Morty fans of the music world. "Ah, YOU don't like it in the sophisticated way *I* do"

Most despicably, in behaviour that recalls the sexist and dumb-as-rocks abuse of Breaking Bad actress Anna Gunn, some Rick & Morty fans have harassed the show’s women writers, threatening them personally, blaming them for “ruining” the show. It got so bad that a Reddit moderator who worked on the show publicly called it out at length.

The moderator was cheered by many decent fans. As with most fandoms, the vast majority of Rick & Morty viewers are decent people, pissed off that some jerkwad is giving them all a bad name.

Dan Harmon, co-creator of the show, lit into the abusive fans too:

These knobs, that want to protect the content they think they own — and somehow combine that with their need to be proud of something they have, which is often only their race or gender. It’s offensive to me as someone who was born male and white, and still works way harder than them, that there’s some white male [fan out there] trying to further some creepy agenda by ‘protecting’ my work. I’ve made no bones about the fact that I loathe these people. It f — ing sucks.

He pointed out that not only is this “disgusting,” it’s also stupid: The fans thought that if a woman writer was credited with writing an episode, that somehow she was the only one who worked on it. But, Harmon says, “I want to scream at my computer: ‘You idiots, we all write the show together!'”

Don’t be that guy. Don’t get so full of yourself for liking something that you think you own it. You don’t; the person who made it owns it, and when they see you trying to hoard the enjoyment that is theirs to freely give, they will strike you down with furious vengeance. They will point at you in front of everyone and show how little you actually know the thing you “defended.”

When you cringe at the annoying type of fan, don’t abuse them. Quietly ignore them, or guide them toward the light. Work from an assumption that they truly enjoy the show and simply didn’t realise the depth of conversation they can have. Treat them as your ally. But remember that they probably don’t want to be “educated.” After all, if any of the above describes you, you really hated this little lecture, didn’t you?