This week, Google announced that it’s replacing its Google Drive apps for Mac and PC with a more functional version, Backup & Sync. You’ll still be able to use your cloud storage from Google Drive in the same way, but the updated apps for Mac and PC will let you sync individual folders anywhere on your desktop, as well as manage your cloud photo uploads. Support for the current versions of the Google Drive apps will end on December 11, with the apps shutting down completely on 12 March 2018.

Google isn’t trying to leave Drive users in the cold, it’s actually hoping you’ll just make the switch to one of its two other cloud storage options: Backup & Sync, or the enterprise-focused Drive File Stream (though G Suite customers can also use Backup & Sync).

Google made this handy chart to explain the difference between the two new options: 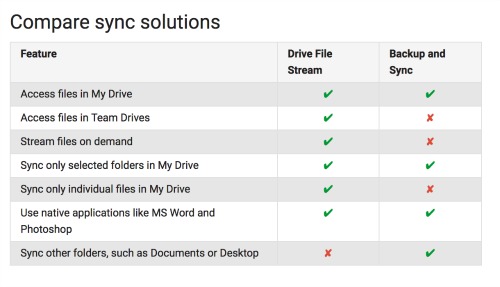 If you’re an average consumer, you more than likely want to move to Backup & Sync. If you’re an enterprise user, then you’re likely better off with Drive File Stream.

Backup & Sync is essentially the Google Drive and Google Photos uploader apps smashed together. If you’ve downloaded the latest version of Google Drive, you’re likely already using it. It works pretty much exactly the same way Drive did, and offers the same functionality that you’ve gotten in Drive. Plus, it has cloud photo uploading support built in.

Essentially, with Backup & Sync you’re picking and choosing what files and folders you’d like to backup, while retaining the option to sync a single folder on your computer.

When installed on a Mac or PC, Backup & Sync will be available on your computer as your familiar Google Drive folder. If you’re someone that just likes to save occasional files to Google Drive, then this is probably the best option for you.

You can download it and get started using the service now. Everyone gets 15GB of space free. 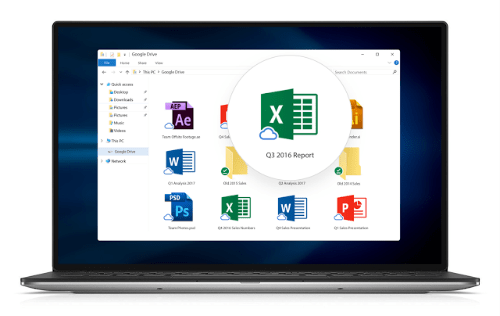 Drive File Stream is for Enterprise users. The service saves space on your computer’s hard drive, by hosting all your files in the cloud. It also offers access to team drives and syncing individual files.

What that means is that you don’t have to download files onto your computer in order to access them. For instance, instead of downloading a Word file onto your computer, editing it, and then uploading it to the cloud again, with Drive File Stream you’ll be able to just open the file from the cloud and edit it. It can save you time, and ensure you’re always working with the “current” version of a document, something that particularly comes into play when several members of a team are working on the same file.

When installed on a Mac or PC, Drive File Stream will be listed on your computer as a drive. So you’ll be able to interact with it in the same way as if it was an external hard drive connected to your computer. If you’re someone that currently treats Google Drive like a second hard drive, then you’ll want to move to this option.

Drive File Stream isn’t available just yet, but should be rolling out starting at the end of the month. If you think this is the right option for you, you can sign up to be part of the early adopter program now.