Check Whether That ‘Craft Beer’ Is Really Craft With This App

beercraft beer
Facebook may have decided that you shouldn’t see the news, but we think you deserve to be in the know with Lifehacker Australia’s content. To sign up for our daily newsletter covering the latest news, hacks and reviews, head HERE. For a running feed of all our stories, follow us on Twitter HERE. Or you can bookmark the Lifehacker Australia homepage to visit whenever you need a fix.

In order to be classified as a “craft beer,” The Brewer’s Association requires the brewery making it to be small, independent, and traditional. That means that while some breweries owned by companies like Anheuser-Busch might call themselves “craft” they aren’t. If you don’t pay close attention, it can be hard to tell the “big” beer from the small guys when you’re at the bottle shop. Now there’s an app for that.

“Independent” means that less than 25% of the brewery is owned or controlled by a beverage alcohol member that is not a craft brewer. “Traditional” means that beers are made using traditional brewing ingredients and fermentation (malt beverages like Smirnoff Ice don’t count).

While you can probably tell that things like Corona, and Heineken aren’t craft, neither are beers made by so-called craft breweries. Many “independent” brands are actually owned by the big players or or holding firms as part of their “High End” portfolios. 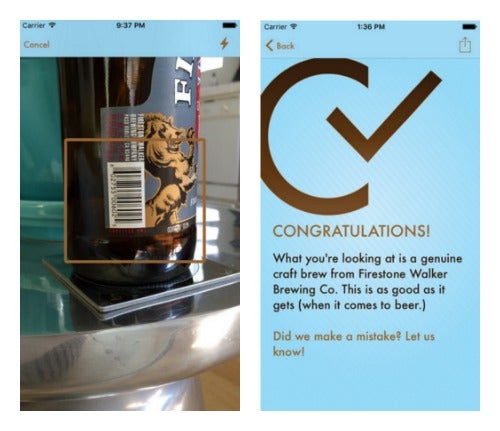 It can be great if you’re at a bar or store and come across something new, and want to make sure you know where your dollars are going before you buy.